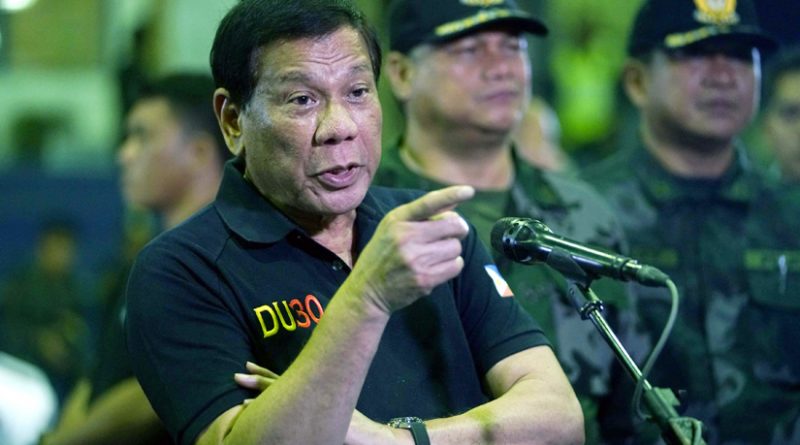 It has become all too apparent that the Duterte regime is not at all interested in the substantive agenda of peace negotiations with the NDFP and only wants to use the talks to compel the revolutionary forces to sign a premature bilateral ceasefire to silence the weapons of the NPA and prevent the people from resisting the GRP’s all-out war.

His declaration last Friday of his refusal to continue talks with the NDFP comes amid accelerated efforts of his officials and loyalists to set the stage for nationwide martial law which will further aggravate the campaign of murder and brutalities under his strongman rule.

He speaks with a forked-tongue in condemning the armed offensives of the NPA after having ordered the AFP to carry out an “all-out war” and employ means to “flatten the hills”. He feigns confusion why the NPA continues to carry out attacks when he has not ordered any letup in the armed offensives of the AFP against the NPA and the people. It was Duterte and the AFP who backed-out from an agreement last March for both sides to issue unilaterally ceasefire declarations.

Contrary to earlier claims that the martial law declaration is not aimed against the NPA, the AFP has carried out intensified large-scale offensives against the NPA over nearly two months which has compelled the people’s army to carry out armed counteractions to defend itself and the people.

The AFP and its paramilitaries have also intensified its armed attacks against the unarmed people in Mindanao and elsewhere. Upon orders of Duterte, aerial bombardments have been carried out against communities in North Cotabato, Bukidnon, Davao del Sur, Davao City, Agusan del Norte and Surigao del Norte which the AFP suspect the people to be supportive of the NPA.

Military units have occupied civilian communities. Across Mindanao, as well as in the Visayas and Luzon provinces, hundreds of so-called “peace and development teams” of the AFPcontinue to usurp civilian authority and turn schools, barangay halls and other civilian structures to military barracks. They maintain their oppressive presence smack in the middle of communities, subjecting civilian residents to constant harassment.

Over the past 50 days, the AFP has forced at least one hundred people a day to leave their homes out of fear. In Mindanao, more than 5,000 civilians are now staying in evacuation centers (not counting those displaced from Marawi). School children and teachers in self-organized community schools in Surigao del Sur and Davao del Norte have been subjected to murder threats and harassments.

Duterte cries crocodile tears over the grave sufferings and hardships of the people in Marawi City who were forced to flee by his orders to pound their homes with relentless aerial bombardment in the name of “driving away the terrorists.” Duterte, the US and the AFP have employed shock and awe tactics to confuse and dumbfound the people and force them to accept military rule and foreign intervention.

Setting the stage for nationwide martial law
After the two-month trial balloon of the Mindanao martial law, the mind-conditioning apparatus of the ruling regime is now working double-time to lay down the legal and political justification for the extension of Duterte’s strongman rule. Duterte has exercised economic and political bribery and arm-twisting combined with threats of murder against anyone who stands in his way.

After initial ambivalence, the US has now declared its unequivocal support for Duterte’s AFPsiege against Marawi under martial law declaration in Mindanao. This is Duterte’s reward for complete concurrence with the US “war against terror” doctrine and allowing full-play to US military presence and interventionism.

In its July 4 decision, the Supreme Court not only gave its imprimatur to Duterte’s declaration of martial law in Mindanao, but laid out as well the legal basis for the imposition of martial law nationwide granting him the complete prerogative to do so. This was a despicable display of legal obsequiousness to the strongman who has habitually flaunted the law with impunity.

Politicians in the entire reactionary spectrum have expressed support for extending the Mindanao martial law declaration and declared openness to covering the entire country. Duterte’s mobsters in Congress are calling for putting the entire country under martial law up to 2022 to ensure that their pet infrastructure projects being lined-up with China funds will push through allowing them to pocket their percentages.

One after another, local government officials are expressing support for martial law, ever conscious of the fact that the incoming secretary of the DILG is the current AFP chief. To ensure further control of local government units, the national police has stripped local officials in Lanao del Sur of powers to command the local police.

Mercenary survey outfits have released its surveys showing “high satisfaction rating” for Duterte to whip up an atmosphere of popular support for his Mindanao martial law declaration and overshadow the widespread grievance over the curtailment of civil rights and the massive humanitarian crisis that has resulted from the siege and bombardment of Marawi City.

The Duterte regime continues to officially and non-officially foment Islamaphobia, religious profiling and similar discriminatory and oppressive measures including proposals for a so-called “Muslim ID” as well as a national identification system.

To justify martial law in Mindanao and make him look like a valiant hero, Duterte contrived a demon in what he claims was a rebellion by the “Maute-ISIS” group without even offering clear and solid evidence. To justify imposing martial law nationwide, he will have to come up with a bigger demon.

Indeed, in its internal martial law directives, the AFP is now being ordered to fight the NPA, together with “terrorist groups”, “illegal drug syndicates”, “lawless armed groups”, “peace spoilers”, “private armed groups” and so on. It is also being tasked to secure areas, enforce curfews, establish checkpoints, restore government services in a push to practically claim the entire civilian functions of government.

Under a Marcos-type nationwide martial law, official corruption is bound to worsen to the detriment of the people. The implementation of Duterte’s foreign-funded infrastructure projects are going to be accelerated with martial law eliminating all opportunity to subject these foreign-loans to scrutiny.

Duterte brandishes military and police powers with utter contempt for human life, human rights and humanitarian laws. Without martial law, Duterte’s so-called “war against drugs” has already succeeded in killing a reported 10,000 people in both police operations and vigilante killings. The “war against drug” will worsen under martial law.

Duterte has shown nil remorse over the sufferings of more than 400,000 Moro poeple in Marawi and its environs who were displaced by the AFP aerial bombardment campaign. The destruction of Marawi is bringing back memories of Marcos’ martial law. It is also rekindling the fire of resistance among the Moro people.

Under martial law in Mindanao, the military has imposed its prerogative over all civilian authority in the island. Civilian agencies will become a mere ornamental appendage to military rule.

The Filipino people must act with dispatch and unite firmly in order to confront US-supported plans of the Duterte regime to either extend the martial law declaration in Mindanao or impose martial law nationwide.

If Duterte continues along the path to attain his ambitions of becoming a strongman, he is bound to be confronted and opposed by a broad united front of forces who are against the return of martial law. The Filipino people are being left with no other recourse but to intensify their mass struggles and amplify their demands for land, jobs and higher wages, expansion of health, education and other public services and other democratic demands.

The Duterte regime’s US-supported all-out war and martial law is a direct challenge to the NPA. The Red fighters of the NPA must firmly grasp their weapons, confront the fascists in the battlefield, wage guerrilla warfare intensively and extensively, further deepen and expand the people’s support and carry forward the people’s war to ever greater heights.