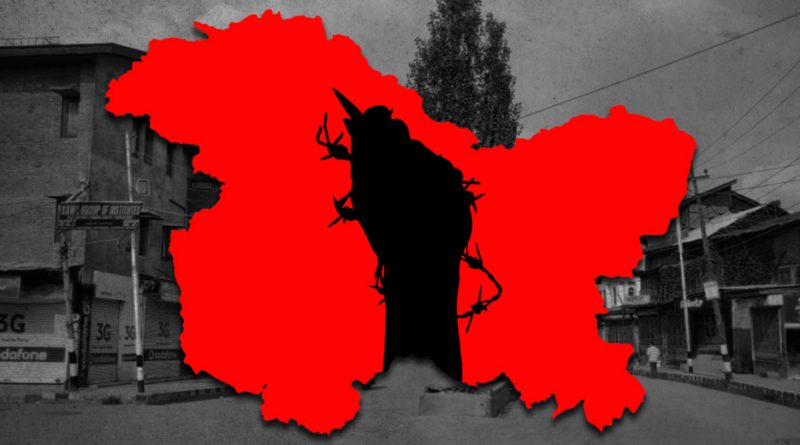 Condemn bifurcation of the State of J&K into Union Territories of J&K and Ladakh
Abolish AFSPA and withdraw the 6.5 Lakh armed forces from Kashmir
Long live the Right to Self-determination of the People of Jammu & Kashmir, including the Right to Secession!

On August 5, the Indian government headed by the Hindutva BJP revoked Articles 370 and 35A of the Indian Constitution, bifurcated Jammu & Kashmir into Jammu & Kashmir and Ladakh and reduced their status to Union Territories. Out of their ego and arrogance, the Modi government didn’t bother to consult the people of J&K nor took them into confidence about the government’s decision. Let alone consulting, the BJP government has jailed or house-arrested all the mainstream J&K political leaders overnight. Over 4000 people were detained in the last 12 days, including Hurriyat leaders, student activists, professors, lawyers and businessmen. All means of communication has been blacked out, curfew imposed, and the Union Home Ministry has deployed more than 30,000 troops during the last few weeks, which is in addition to the 6.5 Lakh military / paramilitary forces already present in Kashmir, making it one of the most militarised conflict zones on the planet.

This move of the BJP government at Centre is a negation of history and completely violates both the letter and spirit of the social contract that the people of J&K had with India in 1949 under which, J&K State was granted a special status and a distinctive political identity. The Article 370 has been systematically watered-down by the successive Congress governments at the Centre over the last several decades. BJP, which continued the Kashmir policy of Congress, has taken away whatever remained in Article 370 by scrapping it and more importantly doing away with Article 35 A.

Not surprisingly, within days of scrapping Article 370 and 35A, Indian corporate houses such as Ambani, Adani, Tata and Birla have made announcements of huge investments in J&K. According to statements made from BJP office, the Central government is going to organise ’Investor Summit’ in Jammu & Kashmir in October this year. This clearly explains that one of the motives behind this political action of BJP in Kashmir is to facilitate the loot of the natural resources and cheap labour by the corporations – Indian as well as foreign. The other motive being implementing the longstanding vision of the RSS of establishing an Akhand Bharat.

Kashmir is bleeding under the repression of the armed forces. Thousands of Kashmiri youth have already been imprisoned over the years without trial and several hundred went missing. Scores of Kashmiri activists and militants have been killed by the armed forces in extra judicial killings. The families of those who were killed or went missing or imprisoned are not able to get justice because of the draconian laws such as AFSPA, which give impunity to the Indian armed forces.

What happened to Kashmir on 5th August 2019 is a warning for all the nationalities of the rest of India. While the global economic crisis deepens, the comprador corporate businesses such as Ambani, Adani, Tata and Birla that rule the country now, through BJP RSS combine, are desperate to keep their eroding profit rates. They will do whatever they can to eliminate competition from the regional business classes (politically represented by the regional Parties) in controlling the local markets and resources. In order to achieve that goal, the comprador corporate business class will need to dismantle the already weak federal structure of India, by taking the governance of the various States either downgrading their status to Union Territories or imposing direct rule of the Central government through the notorious Governor’s rule. It brings to the fore the destruction of the Indian Constitution and the unimaginable horrors of Hindutva rule.

With the above warning, we appeal to all rights organisations, trade unions, student organisations, intellectuals, lawyers, professionals and local businesses to demand the -following:

-Restore Articles 370 and 35A and restore full statehood to Jammu & Kashmir
-Restore normalcy in Kashmir valley buy lifting the blackout on telephones, mobiles, internet.
-Restore press freedom.
-Withdraw 6.5 lakh plus military and paramilitary forces from Kashmir
-Abolish all draconian repressive laws such as AFSPA and UAPA
-Release all political prisoners languishing in jails.