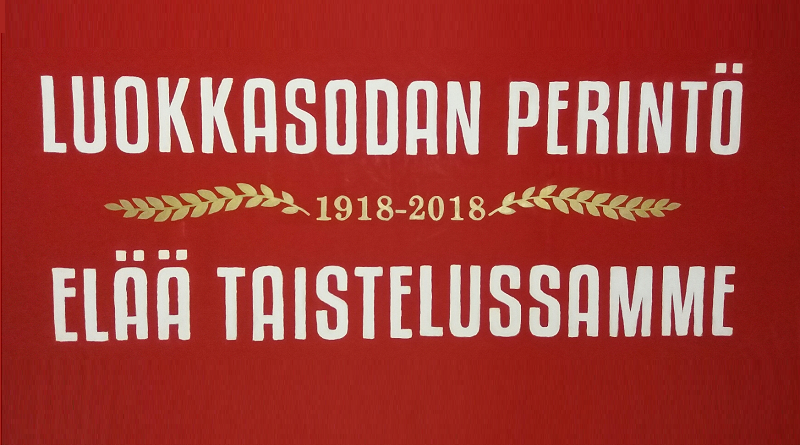 Hundred years have passed since the beginning of the workers’ revolution and class war of Finland. We want to remind of this anniversary and invite reflection about its meaning to this day.

The bourgeoisie owned everything that could be on earth, especially the state power, that relied on armed white guards i.e. the so-called civil guards. Therefore the ruling class of Finland was already then the bourgeoisie Finland. In addition to its own sons, it organized urban petty-bourgeoisie and rural rich and middle landowners with their hired men into the white guards and eventually the main force of the counterrevolution, the white army.

Workers on the other hand suffered at work or unemployed, but not in pious humility. Already since the 19th century they had carried out economical and political struggle, but within the boundaries set up by the bourgeoisie. Only the formation of the Red Guard allowed the working class to take its destiny into its own hands. In addition to workers, also poor peasantry and especially crofters joined the red guards. Peasantry no longer exists in Finland, but the descendants of the reds are mainly contained in the quantitatively grown working class. Let’s be proud of these roots and let’s take action to bring their work to its completion!

But what is the contradiction between the classes today? Still the same old – there’s a handful of rich bourgeoisie and an immense poor mass who the bourgeois oppress. Still the working class suffers at work and as unemployed, and still the bourgeoisie hoards everything to themselves. But the deplorable difference is that today the bourgeois have all the power without challengers. The trade union movement take action mainly out of pressure from its membership, and when it does take action it does so for partial issues, but not for power. All the parties are committed to the rules of the bourgeoisie and have given it a complete monopoly on violence.

The misery around us is the result of the reds’ defeat in 1918, on the basis of which the joyous white butchers established their currently existing bourgeois state. Only a new class war may transform our defeat into victory. Therefore we won’t forget and we won’t forgive, even if it had been a thousand years since the class war. But the poor us can’t wait even a hundred years, the bloodlust of the bourgeoisie is so enormous. In addition to exploitation and oppression, we’re especially strangled by fascism and generally by the destruction of nature, the fixing of which shall become a burden of the construction of a new society.

Today the bourgeois stamp down the unemployed as much as they make. That stamps down our whole class and affects also those with jobs. Mass unemployment produces surplus of labour power, which lowers its price. Also for that reason it’s best for those with jobs to rise up against unemployment and the stamping down of the unemployed. In the worst position are the long-term unemployed, which all kinds of ”active models” threaten to drop from our class and drive into drug trade and other activities criminal towards the working class. We also can’t tolerate homelessness and the destruction of the health of the most poor, when the society has in excess of what is needed for basic needs. Let’s help each other to organize to serve the people and to carry out revolution!

There are also those who come into our midst with nefarious intentions. Fascists, who blame immigration for unemployment, and organize for terror against the struggle unity of our class. Fascism isn’t born out of nothing, but grows from the seeds sown by that century-old bourgeois state on its terrain. Also, it’s not only growing from the grassroots, but is a wholesome and unevenly evolving trend penetrating this whole capitalist society. At state level it’s visible in the restoration of armed or easily armed organizations complementing the army and the police. New white guards are being organized privately and publicly to serve the bourgeoisie in scab work and white terror. Therefore the antifascist struggle is always class struggle, as which it must also be grasped. To win this struggle the working class needs unity against racism and sexism as well as international solidarity.

With the historical anniversary weekend of the beginning of the class war, coincides the presidential elections, in which there are all kinds of clowns on the offer. They’re all enemies of the working class, and none of them should be voted. Not caring about the elections more than that, let’s bring the spirit of the class war into all struggles and demonstrations on all fronts, starting from opposing the ”active model”, the International Working Women’s Day, and the May 1st!

Among the best heritage of the reds is to remember that without power we have nothing, but everything can be attained by daring to struggle. Working class unity and the struggle for power is the solution. When the working class is in power, there’s no unemployment or fascism. We’re united in the understanding that the working class must be at the centre of the struggle against all oppression, and that the antifascist struggle is the work of the masses that prepares the revolution and a better tomorrow without exploitation, oppression and misery. Join us!