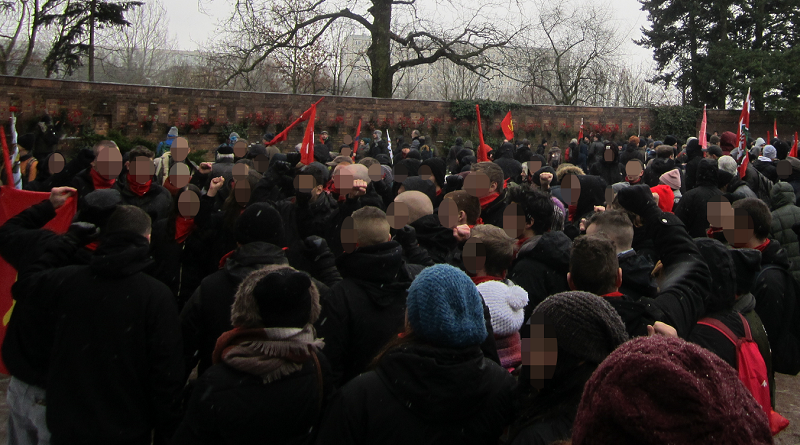 We are standing here among our fallen fighters and heroes to venerate them. Among the founders of our party to pay respect to them. Among them to swear to continue to lead their fight and to fulfill their legacy.

Around us are Social Democrats. People whose political forebearers murdered ours. People who plunge the dagger in our backs when we’re going to take control. People who distort remembrance by drawing a picture of Karl and Rosa as “peaceloving democrats” and “impressive personalities.”

The hyocrites! Take Rosa’s words to heart, “In their hatred and defamation of the Spartacus League, all of the counter-revolutionaries, enemies of the people, and all of the anti-socialist, ambiguous, obscure and unclear elements are united. Thereby confirming that in them [the Spartacus League], the heart of revolution beats, that the future belongs to them… Arise, proletarians! To the fight! There’s a world to win and a world to fight against. In this last class struggle of world history, for the highest goal of mankind, our slogan to the enemy is this: Thumb in the eye and knee to the chest!”

THAT is Rosa and THAT is Karl: Revolutionary. They were like us. They stood with their lives against your feigned social peace that for us means poverty, exploitaiton and deprivation of rights. They stand for us! For the poor! For the workers! With the gun, not with submission.

Around us are revisionists of all stripes and colors. Trotskyists that cry crocodile tears for the so-called “Memorial to the Victims of Stalinism,” arm in arm with their Social Democrat friends. Them that began this year with a smear campaign against us. Those who, even after the collapse of socialism, still don’t have enough and, in their anticommunist delusions, look for trouble with us. They have no goal other than discrediting socialism and attacking it with lies and slander.

Legalistic fools from other parties like the DKP and MLPD, who say that they conduct “necessary, hard, work” while they really organize the labor aristocracy, with their 5000 Euro paychecks, and constrain themselves to the voting booth. They make themselves into the puppy-dogs of Russian imperialism and, decorated with frescoes of Lenin, Liebknecht and Luxemburg, painted in the deepest red and crested with the hammer and sickle, attack, negate, and drag through the mud everything the fighting proletariat has ever built.

We will carry the classics of Marxism over our heads as we march to the graves of our founders. We will continue to hold on to our ideology and our history. We will not let you distort them. We will not let you lie to the masses and fuck around while calling yourselves “communists.” We will put all revisionists to work through fierce ideological struggle, just as Mao Tse Tung taught us.

Around us are the press of our class enemies. How they celebrated the deaths of Lenin, Liebknecht and Luxemburg in their editorial offices! How they bristled at their memorials! How they wished that we would be good and submit and how they agitate against us because we haven’t!

We’ll show them, as we become bigger year by year, that our words don’t honor fallen soldiers, but our actions! That our numbers grow, as do our hate and discipline. That soon alongside youth resistance, worker’s resistance and women’s resistance will march in an iron phalanx in this demonstration, in defiance of all agitation and for the glory of our martyrs until the people finally retire you!

We stand here to fight in remembrance! Their legacy, our struggle! Against all resistance! For Lenin! For Rosa! For Karl!