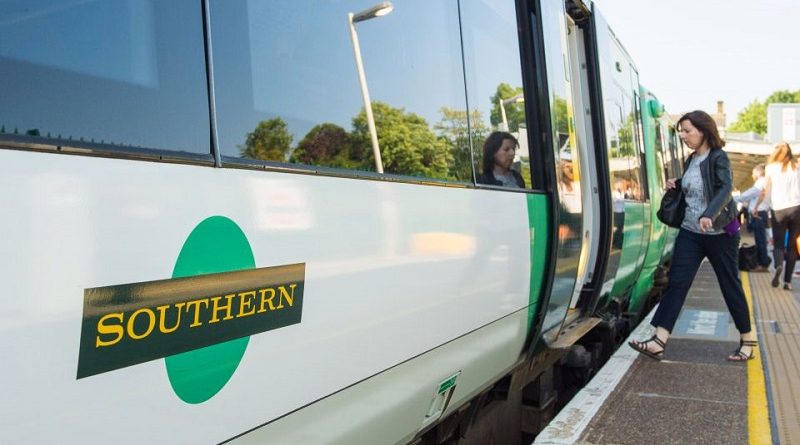 Britain’s railway public transport network has recently descended into chaos due to the total mismanagement of Govia Thameslink Rails subsidiary Southern Rail or rather Southern Fail as the public has re-branded it! Providing a sub standard service to its customers Southern Fail is now attempting to carry out a wave of job loses and attack safety standards by doing away with train carriage guards. Guards are essential for passenger safety on trains but Govia the joint venture of a British and French companies insists on going ahead with axing guards. The company claim guards are unnecessary as a driver can shut the doors of a train from their carriage. The job of a guard is far more than shutting a door! Any emergency or accident on a train requires a guard to take necessary and evasive action to protect the passengers in what could sometimes be very dangerous situations. However Southern Fail exposes again that peoples safety must be sacrificed for cost cutting and ‘efficiency’ read for making profits!

Privatising the railway network has been a disaster for public transport in Britain, the private rail firms are subsidised by the government in any case. Privatisation is a con which allows big share holders and private firms to get more money in their pockets from profits at the expense of the public, dividing up transport links, expensive fairs and unsafe conditions for passengers. It is an example of how capitalism develops everything unevenly and holds life in contempt. It cannot work in a scientific way to serve the people but only chaotically to serve rich capitalists and profits!

The Rail Maritime and Transport Union (RMT) has justly taken industrial action to defend the safety of passengers and the jobs of transport workers. Despite dirty tricks by Southern Fail and government lies the public is increasingly turning its anger to Southern Fail and Govia and the RMT has rock solid support from its members for the industrial action. They have highlighted the incidents in which public safety was at risk but in which danger was avoided thanks to the presence of a guard. The RMT is serving the people!

The RMT is one of a few unions which actually is democratic and responds to the needs of its members defending themselves from the capitalists. The current struggle against Govia has exposed to the public even more how useless the private train companies are at running public transport. In parts of the south coast Southern Fail has cancelled all train services indefinitely leaving communities isolated, people forced to give up jobs and local protests against the company as in Seaford. The government has failed to step in to sort the situation out as it fully supports privatised services.

Capitalism cannot provide a transport system capable of truly serving the people. One reason is the uneven economic development in the country. Much of the employment is concentrated in the metropolitan centres, particularly in London, which requires people to commute far from home. The other reason is the drive to get profit from the transport service by those who own and control it means they will always cut a service or provision in one area or location to spend in another and so reducing the overall provision to the customers who are increasingly having to pay more for a declining service at a time when real wages are falling and basic goods are increasing in price.

The RMT union and now even the Labour Party are calling for the re-nationalisation of the railways, this would be much better but the fundamental control of the public service would still be with a government of capitalists and ultimately they would still be running it to make money or run it as cheap as possible, indeed some train operators in Britain are owned by nationalised transport companies in other countries such as France, Germany and the Netherlands. Affectively the British public is subsiding government run transport systems in other countries as profits from British fares subsidise state run transport companies abroad, who charge their passengers cheaper fares then the British passenger will pay!

Only socialism that is the transition from capitalism to communism can give people real ownership and control of essential public services, where collectively decisions are taken as to where transport links should serve, what provisions are required and where jobs can be created for the interest of communities, not for profit. We do not need money to create wealth and infrastructure we have our knowledge and labour to do what is required to serve the people and not profit. It will only be possible through a revolutionary overthrow of British capitalism and the state by the working class and not through any amount of reforms which will always be half measures, reversed or used against us.