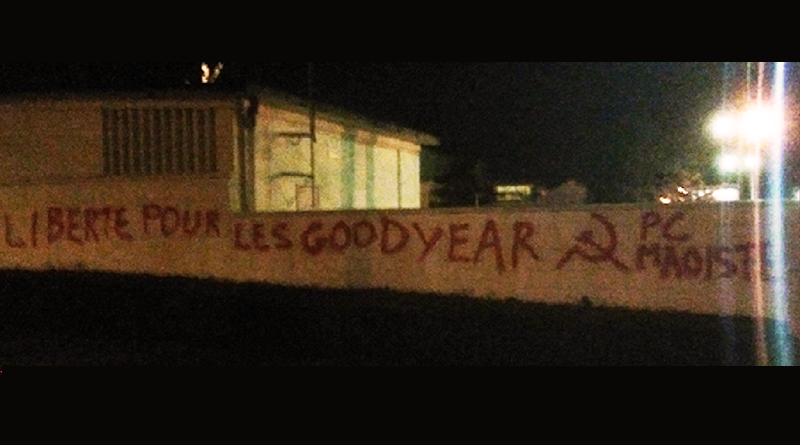 Two messages of solidarity were written at the entrance of the Goodyear factory in Amiens: “Freedom for the Goodyears’!” “Down with the bourgeois justice!” .

Since 2007, the workers of Goodyear Amiens Nord have led the fight against the closure of their factory and to save their jobs. A determining factor in their long-term struggle is their unity, solidarity and determination.

On several occasions, the Goodyear did not hesitate to speak the only language that the bosses understand: the fist! It is also this which binds the struggle and shows that determination is needed to be steadfast and never surrender.

In their fight for workers dignity, the Goodyears had sequestered two executives of the factory on January 6th and 7th, 2014: the production manager and the factory’s HR. Even the management had finally withdrawn its complaint while the two executives had not even filed it. But it was without taking the fierceness of the best representatives of the bourgeoisie into account: the government! Then the penalties fell: nine months of prison, and fifteen months of suspension…

After arresting the struggling workers of Air France, the state persists in its will to make us bend our spine.

We repeat it again, the workers that the state calls “violent” are right to revolt! The state and the bosses don’t hesitate to use violence, and that on a daily basis. Isn’t it violent to be fired? To risk not being able to pay your credit? To fall into depression? To be driven to divorce? To be driven to suicide? Not to mention occupational illnesses and the daily wear and tear of the body when you are at the production or on the construction sites.

Yes, we encourage revolutionary violence which aims to take back that of which we have been robbed, with the aim of social emancipation, for the establishment of a society in which the violence of the bourgeoisie will no longer be subjected! Only in this way can the working class be respected and achieve power.

The Goodyear are right to revolt and we will continue to be with them and support them, as we have been doing for several years now.

Down with bourgeois justice!

Long live the struggle of the working class!

Neither the State nor the bourgeoisie and its watchdogs will make us lower our heads!