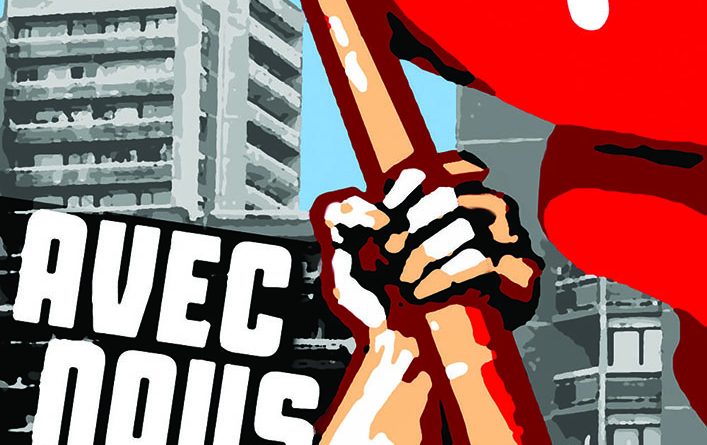 For several years already, Maoists are re-establishing their territory in France. This effort has taken a new turn when, in 2012, comrades from the Maoist Communist Party of France (PCM) and members of the ROCML subsequently left and joined the International Conference in Support of the People’s War in India which took place in Hamburg. A series of joint activities were held by the comrades from PCM and ROCML including the trainings in July 2013 which also involved comrades who are not members of any organizations. As a result of these activities, the comrades decided to lead a unification process for all Maoists in France. Commissions are then put in place to establish the ideological basis for unification.

During the process, ideological struggles emerged which, unfortunately led to the departure of some comrades, but at the same time strengthening the unity of those who are actively participating to improve the process. The Bloc Rouge was formed to organize the Unification Congress of Maoists. This is the result of our theoretical and practical work.

The Bloc Rouge has developed the fight in several fronts such as the struggle for workers’ and migrants’ rights; proletarian feminism; struggles against repression, police brutality and state fascism; and supports the popular war led by Maoist parties around the world.

Moreover, the basis of unity covering issues on Marxism-Leninism-Maoism, the working class, the organization of the people’s war, proletarian feminism, immigration, ecology, and fascism was established by the Congress. These subjects are the contents of an ongoing publication and our program can already be seen on our website – http://www.pcmaoiste.org/.

From the Maoist Communist Party, the Unification Congress of Maoists is born. This is only the first step in rebuilding the Party in France, but the basic foundation has already been laid down.

Our society is a class society, in which some classes have irreconcilable interests. This is particularly true between the proletariat – which possesses only the labor power and strength of the workers; and the bourgeoisie – which monopolizes the means of production (factories, land, resources, etc.).

Our era, as Lenin defined, is that of imperialism and proletarian revolution. Imperialism is the highest stage of capitalism in which finance capital dominates over the economy. The ruling imperialist bourgeoisie seeks by all possible means to accumulate its profit at an ever increasing rate based on the exploitation of the proletariat. In this stage of imperialism, increasing wealth is concentrated in the hands of a few who exploits a growing number of proletarians. It is evident today that there is an increasing number of toiling masses, both men and women, while only a handful possesses the vast majority of the world’s wealth and resources.

The only way to overthrow a system that thrives on war and exploitation and oppression of the poor is through proletarian revolution – the seizure of political power through the dictatorship of the proletariat. The path of the revolution in imperialist countries is, therefore, that of socialist revolution. But as history taught us, the bourgeoisie will never let go of its power peacefully because the whole system is tailored to ensure its political domination and continue its profit accumulation through the exploitation of the labor power of the working class. The seizure of power is impossible without revolutionary class violence and the destruction of the bourgeois state apparatuses. This lesson was already laid down by Karl Marx after the Paris Commune in 1871. The power of one class over another cannot be reversed without violence.

The strategy to achieve this objective is that of People’s War, which gives all possible means available to the proletariat to allow them to successfully move towards the seizure of power from the ruling class; nothing will be excluded, every means, methods, and forms of struggle that are necessary will be employed to achieve the ultimate objective of overthrowing the ruling system. The Party will deploy different tactics in strategic places and time.

But the People’s War cannot lead without the necessary instruments of the revolution.

The three instruments of the revolution

The Party provides the leadership of the revolution. It ensures the unity of its members and all revolutionaries. For without a revolutionary party, the working class is disorganized and cannot defeat capitalism. The most advanced and determined among the proletariat must lead and build the Party.

Today’s Communist Party is based on the ideological foundations of Marxism-Leninism-Maoism, the most advanced theory and practice reached by Marxism.

In the case of China, particular attention must be given to the period of the Great Proletarian Cultural Revolution – the first historical experience of mobilizing the broad masses in the struggle against capitalist restoration; and to the advancement to socialist construction.

In France, from the Paris Commune, to the great strikes of 36, the anti-fascist resistance, the May 68 and all the struggles of the Proletarian Left in the 70s are all part important part of the revolutionary history.

The Party is not enough to wage the revolution. It has to develop a strong movement that will advance the revolutionary struggle. These movements must be able to create a strong counterpart against the ruling State-power. These movements must empower the proletariat and the masses. They are not a fighting force, but stable, self-governing organizations independent from political parties, social-democratic organizations, revisionists and opportunists.

These movements make up the Front that brings together all those who are united to fight against the capitalists, the bourgeoisie and the state, and gathers the broad masses who support the revolution because it believes that “the masses are the ones who create history.”

The Fighting Force is the armed wing of the Party, it is an indispensable military tool of the People’s War to successfully seize political power – it would be a terrible mistake to set this aside. The bourgeoisie has the influence and control over the armed forces of the State and their fascist allies, therefore, the communists must have a strong military force capable of leading the armed revolution.

The Fighting Force must at all times be under the leadership of the Party following the basic principle that states “the Party commands the gun, and the gun must never be allowed to command the Party”.

The development of a fighting force is necessary; however, it must correspond to the objective strength of the revolutionary movement and the intensity of class struggle.

The People’s War is the only way to absolutely overthrow the current rotting system of capitalism. The three instruments of the revolution provide the working class and the masses the means to fight back and seize the political power from the bourgeoisie.

Some questions on the revolution in our country

There are several questions that continue to arise about the revolution. First is about whose interest does the revolution serve. In the case of France, which is the leading imperialist country that is at war in almost all regions of the planet, it is primarily the proletariat or the working class. The proletariat finds basic alliances with other classes and sectors such as small farmers, traders and artisans, intellectuals and professionals.

Our primary task as communists is to organize the proletariat wherever they may be, i.e. in factories and enterprises, in construction sites, in neighborhoods, and in professional and technical high schools and CFA.

These are the places we target to hold our activities.

Several forms of exploitation and oppression exist and we must take them into account in order to develop our strategy.

So the question on fighting for workers’ rights is paramount. Therefore, we organize within factories and enterprises, and other places to support and win over their struggles.

The specific question on women’s oppression is an integral part of the labor question because women workers suffer additional oppression and exploitation than men. They are paid less, subjected to more precarious working conditions, they are still expected to do domestic work, and suffer various types of physical and sexual harassment. The proletarian women are those who stands to gain the most from the revolution, and this is why it is essential to develop proletarian feminism based on class and class struggle.

The issue of immigration is also part of the labor question as proletarian immigrants are our class brothers and sisters. They also suffer further oppression and do not have the same rights as other workers. Racism is still thrives at present and is rooted in the imperialist character of our country. The bourgeoisie does not hesitate to use the contradictions that exist among the people to divide them. They sow hatred among immigrant proletarians against one another. We fight for the unity of the working class in its diversity.

Due to the deepening economic crisis, the bourgeoisie is able to utilize all the opportunities to strengthen its class domination, including the use of fascism. This is further intensified through the strengthening of the State police force and making the provisions for a permanent state of emergency.

The so-called “fight against terrorism” is only a facade to continue their attacks against workers’ conquests and further divide the people into making them believe that the current conflict is a conflict of civilizations and not a class conflict.

We develop the revolutionary class struggle against fascism inseparable from the anti-capitalist struggle and the Republican fascism which makes us believe that the solution is in the ballot hile in reality it only puts the fascists in power.

Finally, we defend the rights of the minorities, of national minorities, LGBTI, the rights that the working class had successfully fought for; we stand for the right to abortion, on the issue of housing, on access to universal health, and sustainable cost of living, in short, everything related to the daily life of the masses.

Our struggle is the struggle of the working class and its allies, we connect our struggle at the international level. We develop the anti-imperialist struggle, above all against our own imperialism but also against the other imperialist powers: we cannot support one imperialist against another.

We also support the Popular War led by Maoist Communist Parties around the world as the highest form of anti-imperialist struggle and as bearers of the revolutionary alternative that will triumph.

It is time to break with the sterile protest!

It is high time to develop our fighting tools, alongside our class brothers and sisters around the world to end this system of exploitation, oppression, war and misery!

Move forward together in the consolidation of the Maoist Communist Party of the revolution in the service of the working class and the masses!