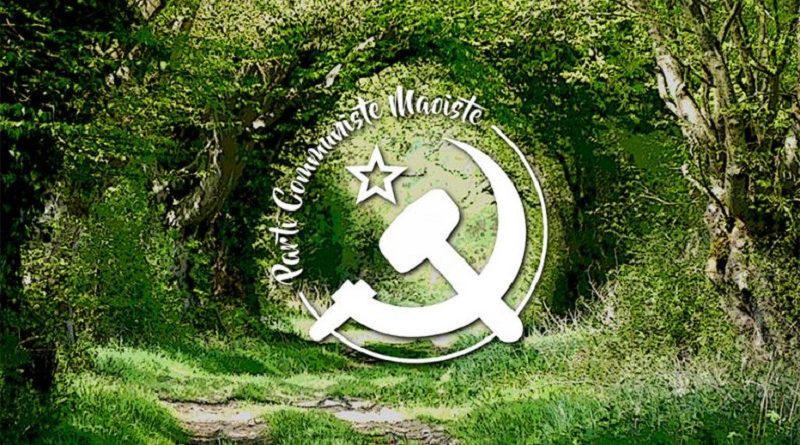 A few months ago, in October 2017, “Le Monde” published an alarming article: 80% of the insects had disappeared in Europe over 30 years, even though global warming should encourage their proliferation. All those who live in the countryside or like to walk there can notice it: we don’t see the clouds of insects flying away when one enters a field or the woods anymore… The disappearance of the bees regularly makes the major media headlines, but all earthly life is declining at a breathtaking speed: massive loss of terrestrial and marine animal diversity, destruction of all forms of plants and mushrooms. It is not a question of protecting some symbolic animals, but all living species.

All of the alarming past predictions about our planet’s future have turned out to be very pleasant next to the new nightmare projections that are made today. The catastrophe worsens and each new study makes the previous one look obsolete and optimistic.

It is not a matter of human stupidity, of simple individual misbehavior, that should be rectified, but the entire production of all humanity, which determines consumption afterwards – since we can only consume what is produced, by definition – which is what needs to be changed.

In capitalism, the only factor for production is capital accumulation – that is, reproducing what is consumed and producing a surplus, which is accumulated by the class holding the means of production, the bourgeoisie.

The workers in capitalism (and by workers we mean all of the participants in commodity production, the heart of the proletariat, directly engaged in the production of goods) are exploited by the bourgeoisie. That means part of their work is used to produce what is necessary to preserve the standard of living of the workers, and of the whole proletariat, and another part is taken by the bourgeoisie, who reinvest a part of it in the reproduction of capital, which gives another share to management and retains the rest in the form of profit, taken largely the form of new capital.

Thus, capital always accumulates: human labor transformed into capital is the most important task of capitalism. Human work accumulated in the form of machines replaces the work humans currently do. Marx said, “Capital is dead labor, which, vampire-like, lives only by sucking living labor”. There is therefore less and less value produced compared to accumulated capital; there is less and less human labor in relation to accumulated capital. It is the downward trend of the rate of profit, which forces the companies to always produce more, to always intensify human work … which again makes the value of the commodity fall, resulting in a lower rate of profit.

It is ultimately a contradictory and antagonistic process of capitalism, which breeds overproduction and crisis.

Whatever the producers’ morals, no matter if there are “ecological” or “bio” labels on products, the planet will always be looted by imperialism, with no respect for life.

Ecology is a class issue

Above all, the first to suffer the consequences of environmental destruction, are the proletarians and the nations oppressed by imperialism.

The imperialists are increasingly relocating their polluting and destructive industries to oppressed nations to escape from environmental standards and exploit cheaper and unprotected labor. Thus the majority of the polluting production activities of the great imperialist monopolies have been delocalised to Asia or Africa, while the less polluting tasks such as the assembly phase have been kept in the imperialist metropolises. The division of labor is a good tool used to pass on the polluting tasks to the proletarians of the oppressed nations. Moreover, the imperialists are at the same time free from all the security standards in their destructive activities, as the workers of the oppressed countries work in the most dangerous conditions and are the first victims of the capitalists’ polluting activities: whether it is the proletarians who work for Areva in Niger or those who manufacture textiles in Bangladesh and breathe chemicals all day long without any protection in factories that are like powder kegs… It’s also felt in the context of looting natural resources as is the case in South America, India or all of Southeast Asia, where the indigenous people are most often the victims of the imperialist monopolies who come to expropriate and destroy their land in order to access mineral and forest resources.

In the imperialist countries it is also the proletarians and the oppressed masses who are the first to be the victims of environmental destruction. We see it with all the industrial diseases, the so-called “occupational” diseases of victims who who work in chemical industries. It is also seen through spatial planning, with the poorest finding themselves increasingly concentrated in the most polluted areas, the closest to polluting industries, while the rich have beautiful avenues and houses in the shelter of large green spaces that they have built and renovated with their fortunes built from exploitation. The bourgeoisie can afford to live in “cleaner”, greener neighborhoods, they can afford to eat organic and healthier food, they buy their electric cars and build their beautiful bike paths next to their homes.

It is therefore totally wrong to speak of equality on the issue of the environment, because  the oppressed peoples and the proletarians have the most interest in change on this question. This change can only come by completely destroying the system responsible for this situation; this change can only come in the struggle for socialism.

The masses will not surrender

The ecological question is not a subject floating in the void of ideas. Even before communists in imperialist countries can fully grasp the question, in France the masses are trying to find a solution to this question. We must analyze every political aspect advanced by the masses with all its contradictory aspects.

One of the solutions is “change through consumption”. But to consider the problem of environmental destruction a question of consumption is to look at the problem in reverse, because it is, as stated above, a production problem. A change in consumption can only be carried out by the richest sections of the proletariat in the imperialist countries, without ever touching the consumption of companies. This position of change through consumption is a predominantly moralist position developed by the bourgeoisie and popularized by the petit bourgeoisie who would like to make ecology a problem of the individual responsibilities of “citizens”. Thus, defending the environment would be primarily a matter of properly sorting waste, eating organic and owning a hybrid car. By proceeding in this way we depoliticize the question of the environment; we fall into the liberal myth of demand determining supply and therefore of consumption being the principal instead of production. The masses are made to feel guilty by advertising spots on TV while the multinationals relocate to overcome any environmental norms and destroy all the planet’s resources, which renders the behavior of each individual towards his waste useless. This situation, which is found everywhere in “changing consumption,” nevertheless shows the reality of the impasse in which humanity finds itself in if it continues to produce in the way it does today. It diverts attention by locating the problem amongst the masses and not the capitalists. But the masses are not fooled; they see the destruction that engenders this system and are always more aware than the real leaders that the problem is not them but those who have the power, who control the production lines. They see that the problem is this system based on the search for maximum profit in a minimum of time.

Another aspect of the ecological question is expressed in ZAD, the “Zone to Defend” like there was in Testet or Notre-Dame-des-Landes today. This movement has been founded on the defense of geographic areas attacked by the bourgeoisie, to confront what are called the “great useless projects”, results of the deadly capitalism which seeks to increase its profit by all necessary means. ZAD activists were able to mobilize the masses locally more or less efficiently as well as different anti-capitalist and radical environmentalists. ZADs have often led to criticism that goes beyond the mere temporary defense of a place, a criticism that states that it is a system as a whole that must be fought against, and that ecology and capitalism are incompatible. On that basis, ZAD activists want to build an alternative to this system now by setting up other ways of organizing, working together and producing. Nevertheless it is impossible to create a system that would be “alternative” to capitalism within capitalism itself. Solving the question of the environment can not be done by coexisting with capitalism but by attacking it head on. All of these types of alternatives end up either being taken over by capitalism, like some workers cooperative which engage in self-exploitation to be able to compete with other capitalist companies, or knows a brutal end based on the will of the bourgeoisie, as it is the case today in Notre-Dame-des-Landes. The ZADists are right in resisting the assaults of the bourgeois state, and the lesson we can learn from their experience is that we can not coexist with capitalism but that we must bring it down. Bringing the bourgeois state to its knees can not be done by retreating to a “zone to defend”, by setting up an alternative micro-system. ZADs can only be encircled and destroyed, or coopted by the system and rendered harmless. The question of the environment is the question of putting an end to capitalism – it is the question of socialism. Opposing the destructive projects of capitalist monopolies is now a necessity, and ZADs can be a good tactic to make a monopoly give up on a particular project, but they are neither a strategy nor an end to themselves. The main question remains that of power and, consequently, of the way in which the proletariat can be mobilized as a whole to overthrow the ruling class.

Beside these, there are also many popular mobilizations concerning daily life: the proletarians of the Valley of the Arve, for example, led important mobilizations against the use of lorries and extremely polluting alpine tourism. In the working-class suburbs, there have been many mobilizations against pollution suffered daily, destroying the quality of life of the masses.

But if many workers are mobilized on these different issues, it is rare that an awareness or a workers’ organization capable of directly influencing production emerges from these struggles. Yet it is urgent to organize the working class, the only people able to offer real solutions, because they are able to differentiate the useful from the useless, to optimize the production without waste, to invent solutions and block destructive projects by refusing to work.

Against alternativism and the idea of ​​building autonomous communities, let us reinforce the working class movement; they are the only ones capable of preventing the destruction of life on earth.

Let us build a revolutionary workers’ movement, capable of grasping all of the questions posed by production!

Everything must be changed by the revolution, for the survival of life on earth!