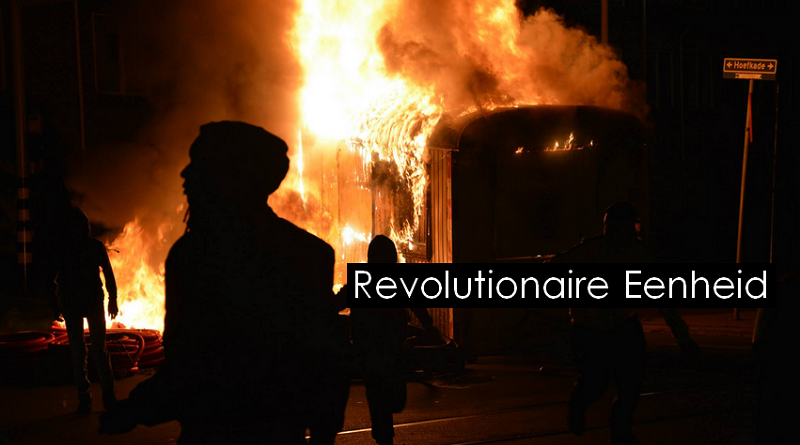 – Anti-Capitalism: Build revolutionary organizations and base areas for the total overthrow of capitalism and all its institutions!

The capitalist system is the main instigator of exploitation and oppression in the world. The fundamental contradiction in capitalism is that between the social character of production and the private character of appropriation. This contradiction is expressed mainly in the struggle between the proletariat and the bourgeoisie, and can only be solved through socialist revolution.

Capitalist class-society is defended primarily by repressive state-apparatuses (police, prisons, army) and reproduced by ideological state-apparatuses (schools, media, family, culture). For capitalism the constant reproduction of a disciplined and productive capitalist work-discipline is essential and people deemed ‘nonproductive’ (for example because of physical or mental conditions) are dehumanized and stripped of their rights. The plunder, pollution and destruction of the environment is also an inherent attribute of capitalism. To challenge the influence and power of capitalist institutions, it is essential to build political power amongst the oppressed and exploited masses. For this we need organization.

– Anti-Imperialism: Fight for the liberation of all peoples from national oppression, white supremacy and racism!

Imperialism is the social, economic and political system of domination of human life. It dominates all nations and peoples. Our era is one of imperialism, the contemporary and highest stage of the development of capitalism. National oppression, the oppression of nations and nationalities, has its roots in imperialism and is aided ideologically by racism. Migrants are victimized twice by both imperialism and colonial violence.

Imperialism has integrated the world into one global system. Solidarity with all oppressed peoples and nations for their right to self-determination are inseparably bound to the liberation of every nation. This is why we are active members of the Dutch branch of the international anti-imperialist united front ILPS – the International League of Peoples’ Struggle.

– Proletarian Feminism: Struggle against patriarchy and the oppression of women, queers, trans people and all gender-oppressed people!

Patriarchy oppresses the overwhelming majority of women, queers, trans people and all gender-oppressed people, especially those who are also nationally oppressed, and places them amongst the most oppressed and exploited sections of the working class. They are submitted to structural violence in the workplace, within the family, by the state and in their neighborhoods. The struggle against patriarchy, just like the struggle against capitalism and national oppression, will have to be waged and led primarily by those suffering the most from it.

In the fight against patriarchy, a form of class oppression with its roots in class-society, it is necessary that the class struggle has a central role. The interests of the majority of women, queers, trans people and other gender-oppressed people who are nationally oppressed or belong to the working class aren’t represented by bourgeois and petty bourgeois feminism. The theoretical and practical development of the struggle against patriarchy from the perspective of the proletariat and revolutionary politics is proletarian feminism.