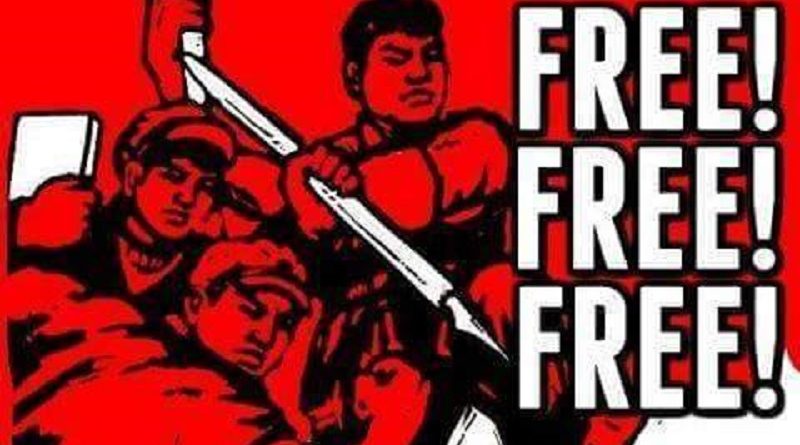 Last night’s noise demo was a success. Two floors of the Jail showed their support by waving through the windows and flickering their lights on and off to the beat of our chants “Free Free Free – UT ANTIFA 3” and “We Love You -We Support You- You Are Not Alone”. Our numbers steadily grew over the course of the demonstration and we marched around the building so that the incarcerated could hear us on all sides.  The demo could be heard loud and clear reverberating off of buildings for blocks around, comrades in attendance blew whistles and banged on pots and pans. Our actions will not diminish and we will continue increasing the pressure until every one of our comrades are freed and their charges are dismissed. These small actions are trivial in the long run and only reveal the urgent necessity of building a strong and united anti-fascist movement in Austin.

Our hearts go out to everyone who has shown up, called in or donated money to help us in this time of need. Fascist threats have escalated in the city and we have responded accordingly. Organization’s like the Revolutionary Student Front, Revolutionary Alliance of Trans People Against Capitalism, Students For a Stateless Society, Defend Our Hoods, Serve The People Austin and others have risen to the challenge and put themselves on the front lines of this battle. Fascists must be consistently confronted ideologically and physically if we fail in this task our inactivity only emboldens the enemy.

The Blanton Art Museum (who a few weeks ago was working with Blue Cat Café) was the institution on the University of Texas campus which allowed white supremacist graffiti to sit for over 8 months. Student activists cleaned the graffiti and the University responded by arresting our comrades without probable cause- this is state repression. They have charged three of our comrades with felonies, these comrades are at this time still waiting for bail to be set and we are securing a lawyer. We insist that the “damages” which the pigs claim amount to over 2000 dollars, is in reality, nothing more than what the city does to remove graffiti by covering it with a solid neutral color. Why is Blanton trying to protect racist graffiti on their edifice? Do they consider this to be art which they aim to protect? UT is persecuting anti-fascist activists for doing the job that they refused to do. No platform for fascism includes eradicating their sloppy messages painted in public view. Yesterday racist graffiti and Trump slogans were scrawled outside of a day labor center in South Austin, no charges were made and as far as we know the city has failed to remove this as well. This is evident of the fact that we live in a settler colonial white supremacist society where both the state via its police and judicial system, as well as the cultural sphere which includes Universities, are all agents in reproducing and enforcing the ideology of white supremacy. These as well as other reasons are why we do not harbor delusions about changing the system from the inside, only acting in ways our enemies find acceptable. Communists are rebels and we rebel against this system and everything that it stands for.

We are aware that these small acts of rebellion mean nothing without broader support; we know that loose groups of anti-fascists cannot defeat fascism in the long term as the contradictions within the imperialist centers intensify. To really defeat fascism we have to not only maintain our fighting capacity but to organize in a far sighted way. We call on all comrades who oppose racism, fascism and white supremacy to unite around consistent activity and vigilance, to commit to erasing fascism from Austin.  For us we work to develop the kind of Maoist Communist Party which will give fascists no ground and can defeat the existing state in open war. We remain committed to uniting with all who can be united with. We need your support and we need you to reach out to your friends and comrades and educate them on this struggle going on in Austin.

Stay tuned for more updates and calls to action

BE DARING, DO NOT RELENT AND DO NOT FEAR

FIGHT BACK THE FASCIST THREAT AND THEIR SUPPORTERS WITHIN THE STATE