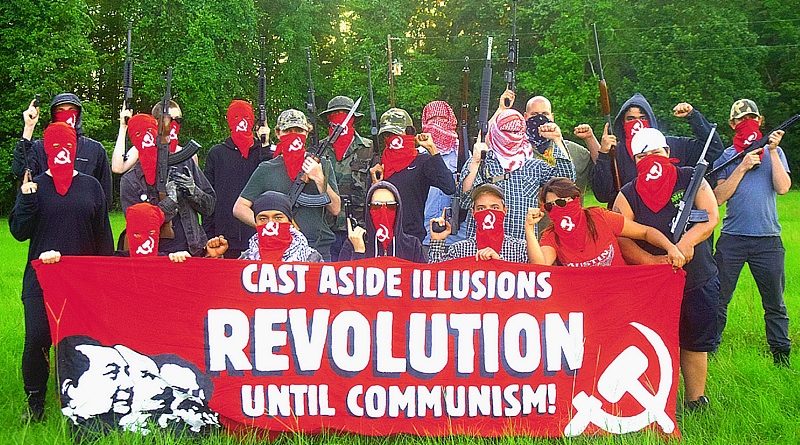 “Behind everything we say is our flag, a flag that is the source of hope, a red flag unfurled to the wind. For a long time some wanted to strike our political line on two flanks but we stated that we would pass through the middle. We accomplished this with our heads held high, beating drums and our vision of a distant future. The deeds go on hammering you and your mind opens, generating the idea. We are not abandoning the banners like some foolish person would think because our hands were not made for dropping the flag but for unfurling it.” –Central Committee of the Communist Party of Peru, 1979

The fascists who confronted Austin’s Red May 1st march tried relentlessly to capture our leading banner. We held tight to it and stand firmly behind our banner, we will never let it drop. As this country spirals into the cesspool of fascism and liberalism’s best answers just lead to collaboration with the far right, we must seriously take up the task not only of self-defense on the personal and community level, but we must also struggle to unite all genuine antifascists behind the necessity of revolution.  Revolution means the long fight for communism and nothing less.

There are those who would demand we surrender; between surrendering to developing fascism and a death earned defending people from it, we must unwaveringly choose the later. We must reconstitute ourselves with communist morality. We must not let our spirits fall. We must bash away the storm clouds which now loom over the most oppressed and struggling people of this country. It is on these values alone that we persist—these values are our bread and our water.

There are those snakes that would tempt with the charms of “safety” or “respectability”, yet there are none less respectable and none more dangerous to the people than these serpents. They have infected the movement for too long and their venom must now be drained. A light emerges through the fog of revisionism, liberalism, and centrism. That light is Maoism and we are the Maoists. We are communists and this is the highest honor which life will bestow. Struggles of such magnitude demand sacrifice in service of the people. We must see no higher task than uniting with the people in the interest of revolution. We must unite the people firmly against the rising flood of fascism. We must steel them in this struggle and embed ourselves inextricably within them.

Reaction in all its expressions rots on the vines of history—it is already in the scrap heap and there it festers still infecting any who come into contact with it. This contagion must be eradicated. The “alt-right”, the less open but no less fascist Trump supporter, the policies of the Trump administration, all must be cured like the diseases they are. Fascist infection of the world was cured before with the victorious march of the Red Army and the treads of their tanks which rode over the skulls of Hitler’s best forces. Fascism is cured with bullets; this is the only discourse for fascism.

What is worth more to us than one successful May Day march are the hard lessons which correct our tactics. What is worth the most is an increased morale and an increased fighting spirit. We send our warmest greetings to our Maoist comrades across this prison house of nations: Red Guards-Los Angeles, Kansas City Revolutionary Collective, Red Guards-Philadelphia, Queen City Maoist Collective, Tampa Maoist Collective, Revolutionary Association of Houston, and all the newer collectives who we have yet to establish official communications with. We send our thanks and salutations to all the revolutionary mass organizations here and elsewhere who inspire our persistence and constitute firm links with the people: Serve The People, Revolutionary Alliance of Trans People Against Capitalism, Defend Our Hoodz, Revolutionary Student Front, Palestine Solidarity Committee. We extend thanks to comrades who have stood with us in the streets: Autonomous Student Network , Oh Shit What Now?, Anarchist Black Cross, and organizations in other cities that are in direct service to their communities.  We extend special honors to antifascists across the land who put themselves in harm’s way defending our communities from the menace—you know who you are and do your work in secret with great pride. Ultimately our greatest gratitude must go out to the working class who alone must be the leading class in the long and ongoing struggle against fascism—everyday working people who persist and fight against the odds in this decrepit capitalist nightmare.

Together we are invincible but only if we fight without fear or relenting. When we fight we fight for communism and everything else will come in time.