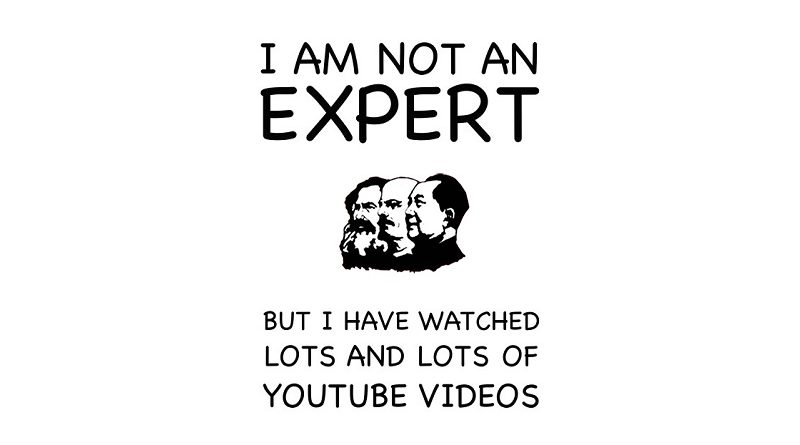 With the proliferation of social networking technology online political discussion/debate has become prevalent. The so-called “Social Justice Warrior” [SJW], which is now a pretty stale cliche, has found its home on Twitter, Reddit, Facebook, etc. In such a context, particular “left experts” have emerged whose expertise is premised primarily on their online following. Certain individuals on Twitter/Reddit/Facebook, based on their ability to promote themselves and gain recognition, sometimes emerge (and sometimes just as quickly vanish) as authorities due to nothing more than self-promotion. Some individual who only discovered Marxism two years ago, for example, is suddenly the de facto expert on Marxist theory even if they do not appear to be organizing outside of their tweets/reddits or have any other credentials beyond their own belief in the efficacy of their analysis backed by some followers. No point in naming names; I’m sure you can imagine quite a number of these individuals.

What I find both strange and infuriating about these “self-made” leftist internet experts is that they have been able to eke out an authoritative position amongst a primarily disorganized and insular leftist milieu and, because of this authority, function to maintain a status quo of non-participation in anti-capitalist organizing. If all the organizing against capitalism is shit beyond the real politik of states then of course one should not organize in the real world. Better to just stay online and involve oneself in Twitter and Reddit fights. These self-proclaimed experts thus serve as ideological police: by regulating what they take to be leftist reality, based on their own beliefs and no evident practical or theoretical experience, they in fact discourage organization––or, at the very least, conflate it with online agitation. At least that’s how it seems.

In opposition to these vague qualifications of expertise, then, I think it is worth proposing the qualifications for left expertise which, to my mind, are only two. That is, there are only two categories that should qualify someone as having any authoritative say about the meaning of Marxism though, to be clear, debate over what counts as being included in these categories will necessarily persist.

The first category, and hopefully the most obvious/important, is organizational. If you are a part of a communist organization that is more than just a talk shop––that is attempting to organize the masses––then the theoretical understanding developed in this practice produces a certain level of expertise. Of course discussions over what organization matters, and whether or not an organization possesses the kind of practice that develops a correct line, are important. But those debates aside, if you are receiving theoretical training as part of a cadre organization that is not revisionist (and this is part of that debate, yes) in the process of being an organizer, then by the very logic of Marxism you are being made into an expert on the theory since this theory is all about practice. To be clear, I have learned more from communist organizers who have lacked academic credentials then all of the professors who have contributed to my academic training. A vital party project possesses more potential in theoretical training than a Marxist professor cut off from the vicissitudes of organizing. But if you aren’t part of such a project, or if you imagine online groups are substitutions for such a project, then you have no basis for your claims.

The second category, and one that is weirdly controversial amongst the self-proclaimed Marxist experts, is in fact academic. Look, I’m not saying that learning Marxism in university is better than learning it within the constraints of a cadre organization (hence my first point) only that, in lieu of being involved in such and organization there really is no other source of training. Unless one wants to pretend that their individual thoughts are superior to academic discipline, and that they are self-made geniuses who have never had to deal with the kind of critique and discipline that academia imposes, you really have to admit, outside of a party project with its own educational discipline, the only other place to become an expert in Marxist thought is academia. I spent 4 years in my undergraduate, two in my masters, and seven in my doctorate studying this shit and, while I count this less important than what I learned from actual revolutionaries without this training, I still know it’s worth more than some twitter/reddit asshole who thinks they are a supernatural gift to theory simply because they read some things on their own time and thus imagine they can burst the “egos” of people who have more training and have spent exhaustive years in academic labour. Why is it that we defer to the authority of someone who has spent less years studying to become a Medical Doctor than someone whose doctoral degree concerns Marxism? If it is because we think an MD is more important than the study of Marxism then what are we saying about the science we espouse? The kind of ego you would have to possess to think you possess more authority in Marxism than someone who has had the opportunity to study it with much more rigour than you is akin to imagining you can be a doctor simply by spending hours reading a few medical texts.

The internet Marxist authority tends to opportunistically use a legitimate critique of the second category to obscure the fact that they have no training in the first. Their stratagem goes something like this: people whose understanding of Marxism is the result of academic training are “petty-bourgeois”, the fact that they are not academics means they are not “petty-bourgeois”, they can thus declare themselves as authorities for being self-made intellectuals because, by targeting academic Marxism as the problem, they can distract any attention to what gives them the right to make this claim. If they were part of a vital cadre project whose training was intrinsically collective, and whose mass-line practice required them to reinvigorate their analysis alongside the masses then they would be justified in making this claim. The truth, however, is that they are not part of such a cadre/collectivist project but still want people to see them as authorities over and above those academic authorities who, rightly or wrongly, have earned their intellectual credentials. By designating those who have done the hard and disciplined work of studying Marxism academically as the problem, and refusing to explain why they have the right to even make this criticism, they can position themselves as authoritative without living the kind of collective class struggle life outside of online forums that would give them the right to make this claim.

The internet Marxist authority is thus a self-declared expert and is in fact more “petty-bourgeois” then every intellectual they magically designate as a pseudo-intellectual. The internet Marxist authority is in fact, by definition, a pseudo-intellectual because no organization or institution has given the the right to declare themselves Marxist interlocutors. This is a role they have given themselves, a practice of pure individualism they attacking those they believe violate a politics they have no business adopting based on their lack of practice.

Let’s call some of them out: Red Kahina, Phil Greaves, Jehu. These are individuals who imagine they are Marxist authorities when they have are not part of any anti-revisionist cadre organization nor have earned a place at the table of criticism through academic discipline. They despise the latter so as to hide the fact that they are disconnected from the former: this is the essence of their politics. Indeed, by proclaiming themselves the guardians of revolutionary thought without being revolutionaries the truth is that most of their ire is distorted jealousy. They target actual organizers because they are not organizing but want people to organize according to their insights. They mock academics because they wish they could be recognized as possessing the same kind of authority without doing the hard work. They make communism appear utterly boring, antiquated, and static (some of the weird followers they have accumulated have made odd statements about “humour” being “counter-revolutionary” for example). They imagine that they are authorities when they lack what would provide them with any modicum of authority and thus attack anyone who does possess this authority. Obsessed with their own importance, the pretend that any criticism of their existence is conspiracy even though their prolonged existence seems to be more conspiratorial. If I was a counter-intelligence operative I would want these individuals who are clearly doing no organizational work to monopolize the energy of online leftists.

So some advice to the young communist engaging with social media: if an “expert” is self-proclaimed, with no organizational or academic experience (and uses their hate of the latter to hide their lack of the former), then they aren’t any kind of expert except in their own imagination. They are in fact rugged individualists who are doing more harm to communism than good.