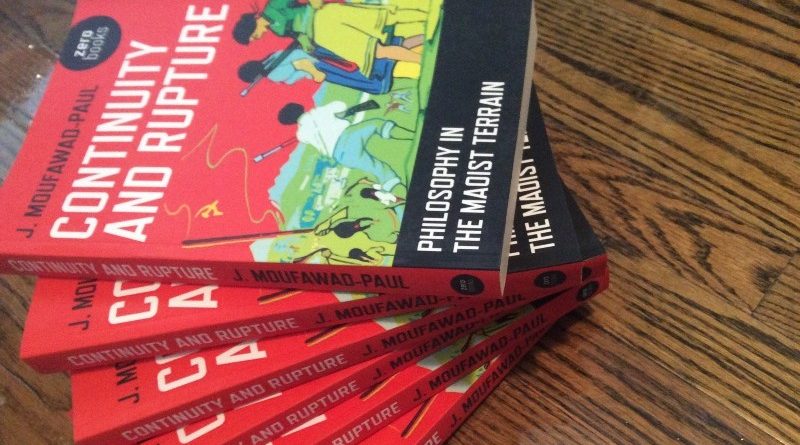 Canada Imperialist States Theory
February 22, 2017 C. Kistler Continuity and Rupture, J. Moufawad-Paul, London (Ontario), Saskatoon, Toronto
Since the release of Continuity and Rupture in December I have been busy hustling this book at launches in various cities. Thankfully it’s doing quite well (or so it seems) and so far has garnered two favourable reviews: one by Hamayon Rastgar in Marx and Philosophy Review of Books, and one over at Tiger Manifesto. In lieu of editing, laying-out, and posting the final section of my Right against Right extended essay, I’ve decided to blog a little (that is, shamelessly self-promote) on my book launch experiences to date.

Hosted by Another Story Bookstore, this launch was packed with Toronto colleagues, comrades, and fellow travellers. Anjula Gogia, formerly the key organizer of the late Toronto Women’s Bookstore, was the Another Story events coordinator who made the event a success and I’m very thankful for her kindness and acumen. She was also generous in allowing me to have a panel where the politics of the book were discussed rather than a simple reading. Kim Abis, the aforementioned Hamayon Rastgar, and Rachel Gorman participated in a panel that was both informative and hilarious (particularly the parts where Kim roasted me much to my delight and that of the crowd’s), and my only regret is that I might have accidentally undermined the possibility of a longer discussion by too quickly suggesting that people didn’t need to worry about a Q&A and just talk with me directly after. My thanks to everyone who attended and supported the book by buying a copy; enough were sold to get Continuity and Rupture mentioned on a Toronto best-sellers list a week and a half later.

The Theory and Criticism department of the University of Western Ontario hosted this launch, thanks to the hard work of one of its doctoral candidates, Alexandra Lepine who also spoke a bit about the ideas of the book on a panel with me. This time there was a long Q&A period and I’m grateful that Nick Dyer-Witheford was in attendance to ask challenging questions about class and the concept of the revolutionary party. As I said during the discussion, Nick’s work on autonomist marxism was my “gateway drug” from anarchism into communism and thus, despite now having moved away from autonomism, I still have significant respect for his work and influence. The fact that he persisted in asking questions that concerned the differences between Maoism and autonomism, and did so in a principled but direct manner, was not only stimulating but demonstrated that he thought the concerns of my book, whatever his reservations, were worthy of engagement. That, along with Alex’s panel talk and similar engagement with the questions, was a great compliment. As an aside, it was also nice to see that one of my former students (from the 19th Century Continental Philosophy course I taught last year) was in attendance, now a graduate student in the Theory and Criticism department of UWO.

Held just a couple days ago at Turning the Tide and organized by RSM/PCR-RCP activists in Saskatchewan, this launch gave me an excuse to visit Saskatoon for the first time. I also used this launch as an occasion to visit some old friends, Jesse and Colleen, who moved out to Saskatoon for work, the latter of whom is a professor at the University of Saskatoon, attended the launch, and asked some challenging questions. Colleen Bell, if you don’t already know, is one of the foremost Canadian scholars on securitization and counter-insurgency ideology and I’ve always found her work inspiring (another shameless self-promotion: I used her work in my upcoming Austerity Apparatus and she also wrote a glowing endorsement). Her questions were about the concept of science and the problematic of “rights”; I hope I answered them with the attention they deserved. But the Saskatoon launch was also an event where a jaded outlier, a former WCP member, showed up to complain that the book was a “throwback” because it was about Maoism. His refusal to understand that I was talking about a Maoism that was different from the anti-revisionist ML sequence with which he was familiar was disappointing but, alas, entirely expected: despite the fact that my whole argument was a demarcation of my understanding of Maoism from his, and that I even catalogued his attitude in the prologue, his attitude proved my point that a certain dogmatism regarding ideology raises its hackles whenever a “new return” to the concept of the party is wagered. It’s too bad he left before I could talk further with him in person, but that’s the problem with this kind of dogmatic attitude: it really doesn’t like being challenged. Thanks also to Nick and Cassie, tireless Saskatoon organizers, who hosted me the second night of my stay and are probably still laughing at my A-type anxiety of needing to get to the airport hours before my flight was charted depart.

I have an upcoming launch in Montreal––at the Maison Norman Bethune which has always been my Québec home away from home––on March 4th so hopefully any readers of this blog who are in Montreal will be in attendance. I also have a launch in Hamilton, though the date is still not nailed down, that will hopefully transpire sooner rather than later. Ottawa and Sudbury have expressed interest: let me know what dates work for you! And for those who have attended my launches and found my presentation lacking I greatly apologize: I have always been better at writing my arguments than representing them in person. But hopefully I’ve said some things, and will continue to say these some things, that are intriguing enough to warrant a purchase of the book.

Anyways, if you want to host a launch of Continuity and Rupture or, failing that, are interested in hosting a launch of my next book, let me know. I’m more than happy, if it’s not too far and I can find a way to afford the travel bill, to show up at your city, blather on about what I’ve written, and hope to god that someone will find what I say interesting enough to engage.