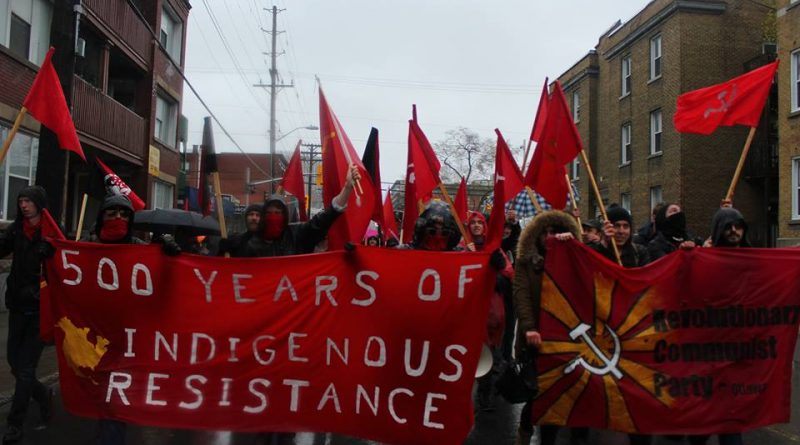 Anti Colonial and Anti Capitalist May Day, What Happened?

The Revolutionary Communist Party (RCP) along with The Revolutionary Student Movement (RSM), The Garden Spot, The Ottawa Panhandlers Union, and local Indigenous activists organized and took part in Ottawa’s 2017 May Day. One of the most politically radical and anti capitalist May Days to happen in Ottawa so far.

The action started at 3pm at Ottawa’s Minto Park. Two indigenous speakers opened the event, the first speaker started with a traditional prayer in Cree. The second speaker who is a supporter of the RCP spoke on the need for the communist movement to also be a anti colonial movement. Even though this years May Day took place during a large rain storm, 80 to 100 revolutionaries and activists took to the streets to celebrate workers power, indigenous liberation, and above all else, revolution. 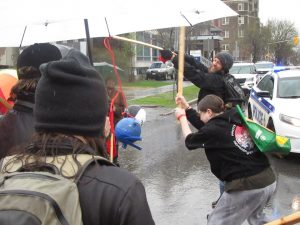 Our first stop was at Ottawa Police Services main building. Marchers took the main intersection and the only entrance and exist for pig cars to come in and out of the station. This location was used for our second set of speakers, the first being a pan Africanist and the second being an anarchist comrade who organizes solidarity work with indigenous peoples. He spoke against police brutality and the brutality he faced being homeless. As the speakers were finishing, a piñata of an Ottawa Police Services pig was brought out, the crowed was eager at the opportunity to destroy it, especially at that location.

Our next stop was at St Patrick’s Basilica, a Roman Catholic church. This location was chosen due to the Catholics Church’s role in colonialism and the residential school system. At this location, two more indigenous activists spoke out about colonialism and the Canadian state. They spoke of how things need to change, how no more indigenous people need to die, that indigenous people need self determination. They also spoke of their personal experiences with colonialism and the loss of family due to it. The speeches ended with a call to action to organizers and youth, to continue the fight and to make a better world.

Towards the end of the march, participants stopped in front of the Prime Ministers office. Supporters of the RCP wanted to give Justin Trudeau the welcoming that he deserved. A effigy of Trudeau and John A Macdonald was brought out with a sign that said “150 Years of Genocide”. The plan was to set it on fire in militant opposition to capitalism, colonialism, and the Canadian state. Due to the heavy rain though, it had to be smashed and kicked.

The end location of May Day was Confederation Park. At this location, the last two speakers spoke. One from the Canadian Union of Postal Workers and the other from the Revolutionary Student Movement. The event ended with an open mic for others to speak and a free food serving by the Garden Spot. 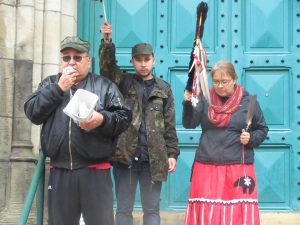 This years May Day brought the day back to its radical and communist roots. Years before, May Day has been coopted by the labour aristocracy, social democrats and big unions. No mention of anti capitalism, revolution, or socialism was heard. Instead the farthest left that was went was politics of anti austerity. We need to continue bringing back the true ideals behind May Day, the ideas that a better world can be built, and through working class revolution, we can make that world.

We would like to thank every organization that took part in this years Anti Capitalist May Day organizing meetings, all our speakers, everyone who attended this year, and everyone that promoted the event.

May Day Statement of the Revolutionary Communist Party – Ottawa

This year, we here in Ottawa on unceded, unsurrendered Algonquin land celebrate May Day – International Workers’ Day – to honour Indigenous peoples’ fight for their liberation and self-determination and to call for and work toward unity between the working class and Indigenous people in struggle against this Canadian state.

Ever since capitalists took political power across Europe, capitalism has built itself by tearing apart communities, claiming land and resources, and forcing everyone outside the owning classes to sell their labour to live. But all the while, the resistance of workers, their struggle against this unjust class society and economy, has shone a way out of the crisis and toward a world without exploitation or oppression. Like countless workers across the world, we celebrate May Day every year to celebrate this history, to honour this resistance – a great international legacy of solidarity, hope, and struggle that we inherit and carry forward. 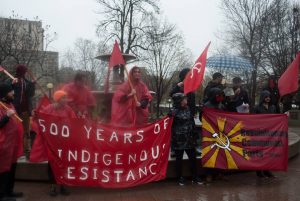 But this year of all years, we call upon the toiling masses of this land to celebrate,
to honour, to learn from, and to unite with another legacy of resistance and radical struggle – the historical and ongoing resistance of Indigenous people to Canadian colonialism. For this year, from coast to coast, Canada’s ruling capitalist class is celebrating the 150th year of their Confederation. The city of Ottawa, founded illegitimately by expat American industrialists and lumber barons upon the Algonquin people’s ancestral lands, is to be one of the crown jewels of this celebration. To all this – this state, its capital, its celebration – we stake our militant opposition.

As much as the Canadian bourgeoisie may try to stir up nationalist enthusiasm among the masses, the oppressed of this land know that 1867 marks nothing more than 150 years of intensified colonial expansion, dispossession, and exploitation. 1867 represents the moment Canada’s capitalists came together as a class conscious of their shared interests and decided to consolidate their political power into a state to advance and to defend them. At home, looking westward, they saw a unified state as a tool to continue the conquest of Indigenous territories and the subordination of native communities to European industry and culture. The Canadian state was a tool to manage the flow of migrants to ensure a steady supply of cheap labour-power for capitalists, and it was a tool to enforce strict racist policies to divide and conquer the real risk of a combined workers’ rebellion and Indigenous resistance. Abroad, the Canadian bourgeoisie needed a unified state to achieve a more favourable balance of power with the United States, which led to the strategic alliance that has proven mutually beneficial to these two imperialist and settler-colonial states.

150 years later, Confederation continues to serve the same purpose. Through long decades of systematic settlement, destruction of traditional economies, and mythmaking about Canada’s supposed enlightened values and just origins on unclaimed land, Indigenous people have been quartered into reserves and urban ghettos, over a small fraction of the territories they used to live on. They have suffered under the residential school system and other genocidal policies, and they continue to be targeted by police forces, racist violence and incarceration. All the while, mainstream politicians regularly bring up assimilation into Canadian society as the only realistic solution. No one is tricked by Justin Trudeau’s posture of polite respect for Indigeneity, for Indigenous culture and values so long as they do not take political expression and interrupt business as usual for the capitalists; the policies his government has enacted have expressed the same agenda of assimilation carried out by Harper and set out, in its clearest and most explicitly racist terms, by his father Pierre Trudeau’s government in the 1969 White Paper. The Canadian bourgeoisie’s interests in ending all Indigenous claims to the lands drawn under Confederation has not changed in this time, and they never will change while its state exists.

At the same time, as part of the same ongoing propaganda drive about what Canada “means,” we see the Canadian government cynically taking advantage of impoverishment and violent conflicts caused by imperialism around the globe to prop up its image as a country “built by immigration” and committed to multiculturalism. But the only thing it has in store for the vast majority of immigrants is unemployment or underemployment, housing discrimination, and mounting racist violence. More and more, migrants are brought in as temporary, second-class people to do the lowest-paid work for our capitalists.

And internationally, Canada continues to work hand-in-hand with the United States and its allies to enforce the military and economic domination of western capitalists, sending armies and selling weapons across the world to crush national liberation movements and put down people’s resistance to the encroachment of capitalist corporations on their communities. Canada headquarters 75% of the world’s mining corporations. More and more, Canada is known across the global south not for the mythical self-image of liberalism its capitalists present at home but for the merciless repression, exploitation, and environmental destruction its companies have perpetrated and continue to perpetrate in Central and South America, Africa, Southeast Asia, and many other regions of the world. In many countries, like the Philippines and Honduras, it is Indigenous people locally who are on the frontlines of resistance to Canadian capitalism. 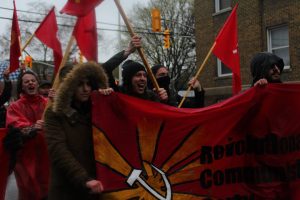 With the sharpening of contradictions between the self-image of the Canadian bourgeoisie and its actions on the world stage and in the territory it
claims and maintains by force, struggling onward to a different society is more urgently necessary than ever. This May Day, we celebrate workers’ resistance for daring to envision a society based on a logic other than profit, value, and self-interest – a society based on freedom from the shackles of poverty, miserable labour, and vast inequality. And we celebrate Indigenous resistance for its courage and principle on the frontlines, for its wisdom and foresight through long centuries of colonialism, and for the powerful vision of a life beyond capitalism that it has kept alive for us and for future generations to carry forward in our fight.

For the coming year, the Revolutionary Communist Party commits to the tasks inherited from the resistance and liberation movements of the past. We continue to uphold the necessity of building a party to wage war upon capitalist reality, organizing the hard-core of the working class for revolution, and taking these tasks seriously. Since our foundation in 2007 we have spread across Canada, and have put these politics in command in all of our efforts. We encourage others to join us in building towards revolution. The overthrow of capitalism, imperialism, and colonialism will not be easy, but it is both possible and necessary.