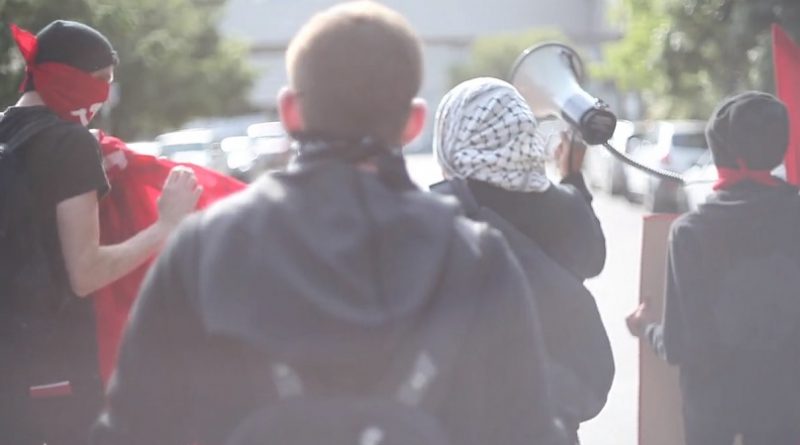 Last year’s May Day march (2015) was an incredible improvement over the lack luster demonstrations that Austin had become accustomed to. This year, organizers of that event came together once more while inviting new organizations to take part in the planning of this year’s celebratory resistance. The demonstration last year was riding a wave of a movement on the country-wide level in direct support of the rebellion in Baltimore that was in response to the murder of Freddy Gray. This year the movement referred to sometimes as “Black Lives Matter” has all but ceased to exist in Austin, in spite of the murder of 17-year-old David Joseph. The energy around Joseph’s murder was extinguished by professional liberal organizers who feel it more important to talk to the police than to hear from the people, which effectively put a pressure valve on the local BLM movement. This effects all other organizing and has an overall demoralizing effect on the people. When news of David Joseph’s death surfaced, upwards of 200 hundred had attended an emergency planning meeting but less than half actually attended the following demonstration where organizers sat with chief pig Acevedo and had their supporters literally silence dissent. The reactionary king-pig Mayor Adler applauded the demo. Suffice it to say that if the head reactionary representatives of the Bourgeoisie support your “protest” then you are doing things very wrong.

This year May Day had to fill its role as an expression of working class anger and by doing so; break with the mold of watered down platitudes that substitute anger for capitulation. There was no movement that could increase participation but the Austin May Day Brigade that was formed responding to the call issued by Red Guards Austin was still able to fulfill the task of drawing a crowd of over 100 friends and comrades. We consider this a great success and have since our inception argued against the postmodernist reliance on movements. Such postmodern conceptions imply that if we get enough people onto the streets we will magically overthrow capitalism, imperialism, patriarchy and white supremacy without firing a single shot. These notions are not only delusional they are suicidal- due to their refusal to acknowledge the need for revolution and a revolutionary vanguard communist party that must guide it.

We live in the age of Imperialism where the primary contradiction is between the Imperialist nations and the nations oppressed by imperialism. Imperialism is not simply a policy or a greedy orientation- it is the natural development of capitalism; all capitalism in time will turn into imperialism which is its highest and final stage. This is characterized by the wealth of the world being dived up among a few imperialist nations- the USA led camp of western imperialism being the greatest threat to the world, followed by Russia and China who contend for ever bigger pieces of the pie. These nations use their money to control other nations and exploit the workers of the world while stealing their resources. This results in almost constant war. The imperialist nations, in this case the USA, create a certain type of thinking in society that results in chauvinism or vulgar patriotism. This imperialist thinking affects communities within the USA prison house of oppressed nations.

Black and brown communities face a specific type of oppression; while on one hand they share common long term interests with members of their class who are white which creates the need for common struggles for socialism, on the other hand they share common ground with the countries directly oppressed by USA imperialism. These oppressed nations must fight both as workers exploited by the USA at home as well as being oppressed nations themselves that share the struggle against imperialism abroad. Capitalism seeks to dominate these communities in a similar way, it uses the rationale of imperialism to wield its money and uproot whole neighborhoods, erase culture, steal homes, land and resources. As capital marches into the black and brown communities of Austin’s east side it is the people who pay the ultimate price.

In Austin this is seen most apparently in the former Rainey Street neighborhood. Rainey Street was once a Chicanx working class community which was eradicated by city planners. The houses which generations of oppressed nations people grew up and lived in have not been demolished, they have been transformed into “quaint bars and cafes” for white and wealthy west siders and out-of-towners. Urban removal has added salt to the wounds of the people by letting their houses stand as playgrounds for the rich who pay 10+ dollars for a drink. May Day 2016 consciously sought to target such places to confront the vile results of gentrification directly. There were chants that included “take the heads off the rich” and “we want our hoods to be healthy, not just for the white and wealthy” and others that sharpened class hatred into a weapon by articulating the necessary course of action- people’s war.

It was on Rainey Street that tensions and class contradictions became the most sharp. One intoxicated person who was chanting “I’m rich! fuck you!” became particularly aggressive with the marchers and just as he was beginning to show signs of making a physical attack he was confronted with a bottle to the face. Unfortunately the bottle was made of plastic and filled with only water and no serious harm came to him. The local pigs intervened by arresting the tech bro to prevent the demonstrators from exacting on the spot judgment and carrying out punishment of our own, which would be far more effective than a night in the drunk tank. No comrades were arrested and the march continued to its conclusion.

The march for this year as well as last year started at Palm park, which historically served the community of the east side and stands as one of the last intact places west of IH35, part of these demonstrations is based in the need to reclaim our sites even temporarily. Other stops on the march included the former site of El Centro Chicano/the Juarez Lincoln center which provided services for the community and was demolished against a backdrop of resistance to make way for an IHOP, as well as the former site of Jumpolin, a local piñata shop owned by a family which was torn down to build the most vulgar of places… a cat café.

As usual the march refused to obtain permits or publish our routes. We again frustrated the efforts of the pigs to provide escorts. The pigs again resorted to low intensity warfare tactics of trying to present themselves as “good cops”. This attempt failed to win any support or sympathy from those celebrating International Workers Day who only greeted them with chants of “police lives don’t matter!” and “oink oink, bang bang”.

One of the most apparent improvements over last year was the fact that at least 95% of those in attendance wore masks, we managed to keep the media out and limit the number of photographs taken (all of which are compiled by the police and used to prosecute comrades and friends who express themselves in ways not palatable to the capitalist enemy). We highly encourage masks regardless of if one intends to follow the laws or not due largely to the fact that the pigs and the pig system hate radical organizers, and reactionaries are prone to trying to get workers fired if they are found out as communists etc. With only half the numbers in attendance as the year prior, May Day in Austin was a success in regards to both turn out and energy of the crowd. We witnessed another militant demonstration that directly confronted the rich, the state and their agents. Another year where workers came together to express rage and solidarity be they anarchists, communists or just folks with no tendency at all, the people stood together. The march included workers and organizers seeking better wages, workers and organizers supporting state wide prison labor strikes, representatives of militant trans liberation struggles, community organizations that offer free food clothing and revolutionary politics to the community, anti- policing activists, and Palestinian solidarity activists. This year we called upon workers to turn Austin upside down, next year let us call four times as many so that we can smash it to bits! Let the rich and their pigs live in fear of May 1st.

Revolutionary Alliance of Trans People Against Capitalism, Austin Anarchist Black Cross, Palestinian Solidarity Committee, Serve The People Austin, the Austin branch of Socialist Alternative, and especially Defend Our Hoodz, as well as every other friend and comrade who attended.

The video at the top of this post captures the event without compromising anyone’s identity. It was filmed and edited by a friend and comrade of RGA and is being released with our approval. It includes things discussed in this report: the rich man on Rainey Street as well as a brief talk given by a Red Guard outside of the former Lincoln Juarez Center.
—