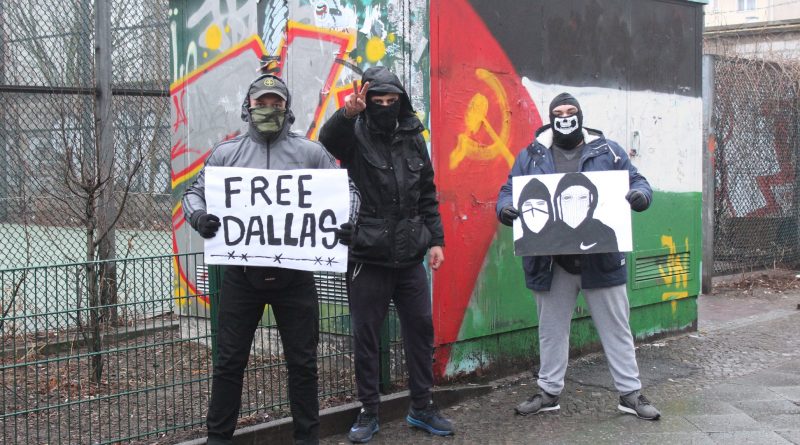 From the streets of Germany, Jugendwiderstand salutes behind the american prison walls to promise Comrade Dallas solidarity and support.

As Marxist-Leninist Maoists we face new and enormous tasks today. While the main trend in the world is still the revolution, and the peoples of the world and oppressed nations are fighting and defending themselves, the struggles and perspectives in the imperialist countries are much less mellow and ready.

The actual question for us here in Germany, as well as for you dear comrades in the USA, is the question of how we can apply our almighty, because true, ideology to the concrete conditions of the imperialist countries, like Germany, or the USA to define a proper strategy based on this foundation, which enables us to create facts and conquer the political power of the proletariat in the protracted people’s war, thus rendering a service to our own people, and especially to the oppressed peoples and nations.

These are our tasks and they are new. The order of the moment is, to make steps forward into uncharted territory, while firmly standing on the ground of Marxism-Leninism-Maoism. To use the synthesis of Maoism creatively in new fields, to use the sharp sword of our ideology for a socialist revolution, and to cut off the head of imperialism, together with the most suffering of the earth.

We see how you are making great progress in solving these tasks in the US. It is good to see Austin’s antifascist movement marching, gaining experience, becoming stronger and polarizing. It is good to see you pushing the enemy into situations where he is forced to unmask and resort to brutality and violence. Your fight, comrades, is very inspiring for us.

We have every confidence in your reports and assessments. So, based on your account of his person, we come to the conclusion that Dallas, whom they now mistreat and imprison, is a true son of the people. But just because of that, the sacrifices he has to bring now must not be in vain! As you have correctly recognized, their brutality and their terror cant stop their own demise, but only accelerate:

We see the wave of solidarity for your comrade Dallas, whom we join. We see the comrades and activists of the movement in the United States love Comrade Dallas, and we see how every crime they inflict on him will only make them continue the fight which Comrade Dallas upholds. From a standpoint of honor and unwavering faithfulness to a true servant of the people, your struggle with this important political prisoner now becomes an additional moral dimension for many people.

We declare our solidarity and deep moral commitment to the Red Guards and the anti-fascist movement in Austin. Especially Dallas, his fiancée and her unborn child we wish in these times a lot of strength, confidence and perseverance. For his unborn child applies, what applies to all the children of the Communists, soldiers, revolutionaries, and combatants of the class, whose parents are murdered, abducted or on the front line: Because their parents have decided to serve the people, the masses will become like loving parents for them. Because through our connection to them, we are invincible.

ALL REACTIONARIES ARE PAPERTIGERS!
FIGHT REPRESSION WITH INTERNATIONAL SOLIDARITY!
FREEDOM FOR COMRADE DALLAS!