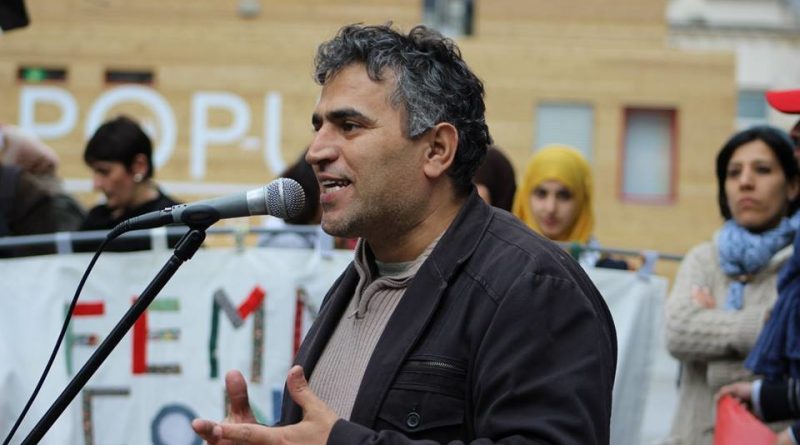 Germany is to expel Palestinian writer and journalist Khalid Barakat and his wife Charlotte Keats for their support of the Boycott, Divestment and Sanctions (BDS) movement.

Barakat has lived in German capital Berlin for 18 months and works as freelancer, while his wife is an international coordinator for Samidoon – a Palestinian media group which supports Palestinian prisoners. Both have been accused of supporting BDS, Arab 48 reported yesterday.

The German police detained Barakat on Saturday as he headed to an event about Palestine, which had been organised by a number of Arab communities in the German capital.

According to Arab 48, the German police informed Barakat that he is now banned from taking part in any political or cultural events, as well as family meetings with more than ten attendees. If he breaks these restrictions, he will be detained for one year and forced to pay a fine.

Writing on Facebook, Lebanese writer Samah Idris said that Barakat told him about his situation, posting excerpts from the expulsion order.

This order stated that the decision was based on information collected by the German intelligence services “over a long period of time”. It also claimed Barakat had been involved in a series of meetings and activities which “proved” that he is “[an] anti-Semite and anti-Israel.”

Idris also said that the decision claimed Barakat is considered a threat to internal peace, incites against Jews and is a member of the Popular Front for the Liberation of Palestine (PFLP).

Last month the German parliament voted to define BDS as anti-Semitic. The motion claimed “the arguments, patterns and methods of the BDS movement are anti-Semitic”, arguing that BDS’ “don’t buy” stickers – which aim to identify products of Israeli origin so consumers can refrain from purchasing them – “arouse associations [with] the Nazi slogan ‘Don’t buy from Jews’” and are “reminiscent of the most horrific phase in German history”.

The move has since been severely criticised, with the Palestinian Authority (PA) slamming the decision as “dangerous” and Palestinian NGOs arguing such actions delegitimise peaceful resistance.