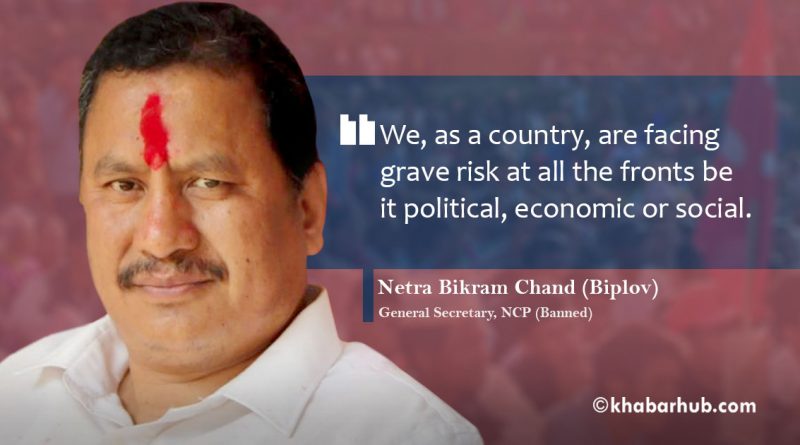 Netra Bikram Chand (Biplav) was one of the strong pillars of the decade-long ‘People’s War’ launched on 13 February 1996 under the leadership of Pushpa Kamal Dahal (co-chair of the present ruling party — Nepal Communist Party of Nepal). He is still in the same mode of being revolutionary communist as he was then. General Secretary of his own political party Nepal Communist Party, Netra Bikram Chand is posing a stiff political challenge to Ram Bahadur Thapa, Home Minister of Nepal. Though both of them served together for a common cause they believed in, they are facing each other for opposing political causes this time in the changed political scenario. Biplav is branding himself as a man of people and the government as a symbol of fascism muzzling the voice of people. Biplav, who is up against the existing political system to replace it with his own, is ready for any constructive dialogue with the incumbent government. But he has some points to put forward. An interview with Khabarhub’s Chief Editor Jibaram Bhanadri:

The incumbent government is led by the Nepal Communist Party. However, its appeal to the people is on the wane. How optimistic are you that your party will grab people’s attention?

People’s attention, in fact, is drawn due to a host of issues of national importance acting together to lead the country forward on the path of social justice for all including farmers, laborers, women, and youth by keeping our national sovereignty all safe. Democratic parties must work tirelessly through their political ideology, programs, and policies to draw the people’s attention. Unfortunately, the country is heading in the wrong direction and is at the brink of political explosion. We, as a country, are facing grave risk at all the fronts be it political, economic or social. The only reason behind the current political problem is the parliamentary political parties who are apologists of ‘commission-based exploitative capitalist economic system’. The political parties such as Nepali Congress, CPN-UML and CPN- Maoist (center) are the agents of capitalism.

My party will never compromise on issues of national importance and blow the bugle for political protest whenever political interference of foreign powers and attack on our sovereignty are in sight. We always stand with the people of Nepal and fight for ensuring their fundamental rights. Our party will never tolerate any kind of loot of state treasury for political selfish interest, the culture of commission, corruption, smuggling, social injustice, rape, theft, inflation and any frontal attack on our national interest. Actually what we as political outfit are committed to concern the people of Nepal. Therefore, all these issues I am highlighting belong to people and are meant for their welfare; we are just pressing for their demands on their behalf. We exist for people and people will definitely be drawn to us and towards the political ideology, we stand for. There is no doubt about it; people will stand by us as we stand by them.

As our political outfit advocates, the central focus of change in the political system is to end the capitalist model of economy guiding the country at present. The parliamentary democracy driven by the capitalist economic model has only exploited the common people of Nepal. They are suffering from poverty and they have become dependent on others living in slavery. Time has come to change the political system of the country. The current crop of politicians has done nothing except to serve their personal interests by compromising with our national interests. We want to replace this political system by our own political system — ‘Scientific Socialism’. We are rooting for ‘scientific socialism’ which will root out all the discrimination, exploitation, loot, corruption, political instability, war and conflicts imposed upon us by capitalist economy functioning under the protection of parliamentary democracy. And not to forget here that our political system will ensure liberty and equality of (and among) all the people of Nepal.

Do you think people of Nepal will hit the streets and swell in numbers in name of communist ideology and particularly your version of communism?

Without any doubt, people will come out in my support because they are the same people who never tired in giving support to political movements launched by Nepali Congress, CPN-UML and CPN – Maoist (center) in the last 70 years. They are the same people who never hesitated to propel the political parties like Nepali Congress and CPN-UML to the seat of power by voting for them with the majority and two-thirds majority support in parliament. Even CPN- Maoist (Center) was trusted by the people of Nepal albeit for a short period of time. The question here is that why these political parties failed to deliver to the very people who trusted them for giving a clean political system to ensure peace, progress, and prosperity of the country. On the contrary, these political parties fooled the people by betraying their trust and misused the public money on self-aggrandizement. These parties have looted the very people who voted for them and sold out the country to foreigners just for personal gains. It is the failure of the present political system which will unite the people to come out in support for ‘scientific socialism’ propagated by our political outfit.

Communists all over the world are on shaking political ground. They are also not getting favorable reviews in Nepal even after getting such a historic landslide victory in last elections. How do you assess their future political prospect in this backdrop?

It is true that the world communist movement went through some hiccups and hitches here and there after the death of Mao Zedong in 1976. At the same time, capitalism has also not succeeded to sweep the world. The ugly face of capitalism has become all the more distorted with the unstoppable cases of dishonesty, loot and corruption of people’s wealth by a handful of the privileged ones. Only capitalism is to be blamed for all the sufferings and ills that people are facing all over the world. Howsoever difficult the political path may appear for the communists at this juncture, one thing is incontrovertible is the fact that capitalism is not the solution for the present humanity. Even intellectuals of the present capitalist world have come to realize this fact. And Nepal is even deprived of the modified version of capitalism called ‘progressive capitalism’.

I personally am against this version of capitalism too because ‘progressive capitalism’ has no potency of its own as it has been illicitly germinated idea of foreign powers to hold on to political power. Progressive capitalism is nothing but an impotent capitalist model without having any capacity to bring positive change in the world political system. This newer version of capitalism cannot even provide impetus to the industrial and technological sector of the economy. The system will provide ways to safeguard the capital of foreign masters by reducing the common people into the market making them vulnerable for ruthless economic exploitation. We don’t have any manufacturing and production base of our own but want to consume all the products of the world entering Nepal freely without any restrictions. This is why we see rampant corruption, trepidation, erosion of moral values, smuggling, cheating, human trafficking, and flesh trade. I am sure that the present political system promoting and protecting all the ills of society will come down crashing to establish the people’s rule full of meritorious qualities and revolutionary communists like us have bright future ahead.

Your questions are overlapping. I will disaggregate them and then answer. The K. P. Oli-led government is brutally suppressing our political movement by branding us as terrorists. This is nothing but a fascist way of dealing with political dissent. The government is pushing us towards waging people’s war once again. We have not done anything illegal as we are continuing with our political movement as per the people’s wish. We have not picked up any arms. Police killed one of our comrades Tirth Raj Ghimire (alias Raju) on Jestha 8, we exhorted ‘Nepal Bandh’ to protest against police barbarity. During the course of Bandh preparedness, few more comrades got martyred owing to some technological snag. We shall never let their sacrifices go in vain. Similarly, some members of the standing committee and a hundred others are behind the bars. These comrades are not sitting idle in the prison, they are protesting hard pressing their demands. They deserve supreme honor as they are not let down even in the face of such state-sponsored violence against our political outfit.

Government is politically motivated in its analysis declaring our presence just confined in a few pockets of urban areas. We do not believe in such a division of our society into rural and urban areas as it does not exist anymore. Actually, the Government is irked by the growing dissatisfaction against them amongst the people particularly in urban areas of Nepal. Even their own party — Communist Party Nepal is on fire within divided into several groups.

Government is proposing both constructive talk and further restrictions with reference to your political outfit. How do you respond?

It is totally false and also misleading. In reality, Government has been proposing the option of constructive talk right from the day we came into existence but in practice suppressed our activities with a heavy hand. It is just political optics. The government fears us because we raise the issues which are close to the heart of Nepalese people.