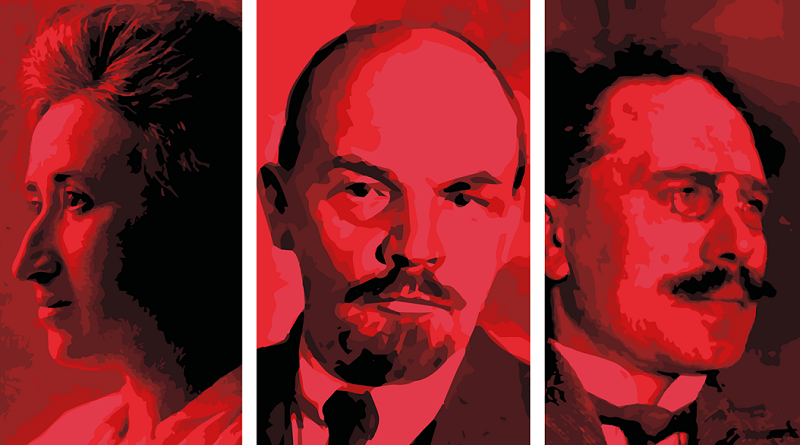 “All men must die, but death can vary in its significance. The ancient Chinese writer Szuma Chien said, ‘Though death befalls all men alike, it may be weightier than Mount Tai or lighter than a feather.’ To die for the people is weightier than Mount Tai, but to work for the fascists and die for the exploiters and oppressors is lighter than a feather.” – Mao

Vladimir Lenin, Karl Liebknecht and Rosa Luxemburg died for the interests of the working class and the masses of the people. Their deaths are “weightier than Mount Tai”.

On January 2017 we commemorate the 98th anniversary of the murders of the cofounders and leaders of our party in Germany – Karl Liebknecht and Rosa Luxemburg. In their connection to the revolutionary tradition few years later, by having established the Communist Party of Germany, we also commemorate the honour of the great leader of the socialist October Revolution: comrade Lenin, who also died in January.

Karl Liebknecht and Rosa Luxemburg were communist fighters and important leaders of our movement. They sacrificed their lives in the revolutionary struggle for the dictatorship of proletariat in Germany. They stand for the resolute commitment against imperialist war and the exploitative system of wage slavery. On the order of the SPD leadership, they were treacherously murdered by the forces of reaction only a few days after they accomplished their most important action – the completion of the foundation of the Communist Party.

The break with social democracy, which openly moved to the camp of bourgeois imperialism no later than with the First World War, came too late to Germany. The young party of the proletariat was not consolidated and experienced through struggles as long as that of Lenin’s Russian party. Thus, the revolutionary struggles in Germany at that time, as heroic and selfless as they were, failed.

Nevertheless, any prosecution by the state couldn’t break either of them while they lived. During the betrayal of social democracy, they held steadfast to Marxism, to the oppressed masses of the people and called for even more: the fall of the rule of the monopolist bourgeoisie in Germany, while also unflinchingly defending proletarian internationalism.

Lenin explained that “[d]uring the lifetime of great revolutionaries, the oppressing classes constantly hounded them […] After their death, attempts are made to convert them into harmless icons”. This is perfectly accurate and confirms itself again today with all the wretched social democrats, reformists and revisionists who decorate themselves with “Rosa and Karl” as they blunt and distort their ideas and reduce them to toothless, pacifist dreams.

But Liebknecht and Luxemburg were revolutionary communists who gave their lives in the struggle for the KPD, for socialist revolution and the dictatorship of the proletariat!

“The proletarian revolution [is] the action of the great massive millions of the people, destined to fulfil a historic mission and to transform historical necessity into reality”

“The fight for socialism is the mightiest civil war in world history, and the proletarian revolution must procure the necessary tools for this civil war; it must learn to use them – to struggle and to win.”

And “In their hatred and defamation of the Spartacus League, all the counter-revolutionaries, all enemies of the people, all the antisocialist, ambiguous, obscure, and unclear elements are united. That is proof that the heart of the Revolution beats within the Spartacus League, that the future belongs to it. […] Proletarian, arise! To the struggle! There is a world to win and a world to defeat. In this final class struggle in world history for the highest aims of humanity, our slogan toward the enemy is: Thumbs on the eyeballs and knee in the chest!” – Rosa Luxemburg

That’s the truth. That’s the declared belief in revolutionary violence as the midwife to the birth of a new world. Those are the words and spirit of Rosa Luxemburg. Karl Liebknecht’s most famous quotation also shows his militant and determined will for the victory of the people over the oppressor:

Thus, the main enemy is in the home country, and today it’s called German imperialism. We must shatter it, break the rule of monopoly capital and smash its bourgeois, class state. That and nothing less is the historical mission that Karl Liebknecht and Rosa Luxemburg left us. On the global level, the main enemy of the people is US imperialism, which covers the earth with its unjust wars and the murder of the people and continues to pursue the “international imperialist tearing apart of peoples” (Liebknecht). At every stage, the revolution must direct itself against this enemy. The legacy of both these communists is only fulfilled in this struggle.

That which comrades Liebknecht and Luxemburg also left us after their deaths as an invaluable instrument of the revolution – the party – was taken from us by fascism, reaction and chiefly the evil role of revisionism. And so we stand again today in a similar situation: the proletariat and masses in Germany stand without their organisation for struggle, the communist party, there. Meanwhile, social contradictions intensify and the hate for exploitation and oppression among the lowest and poorest sections of the people grows continuously and it is necessarily so bitter. 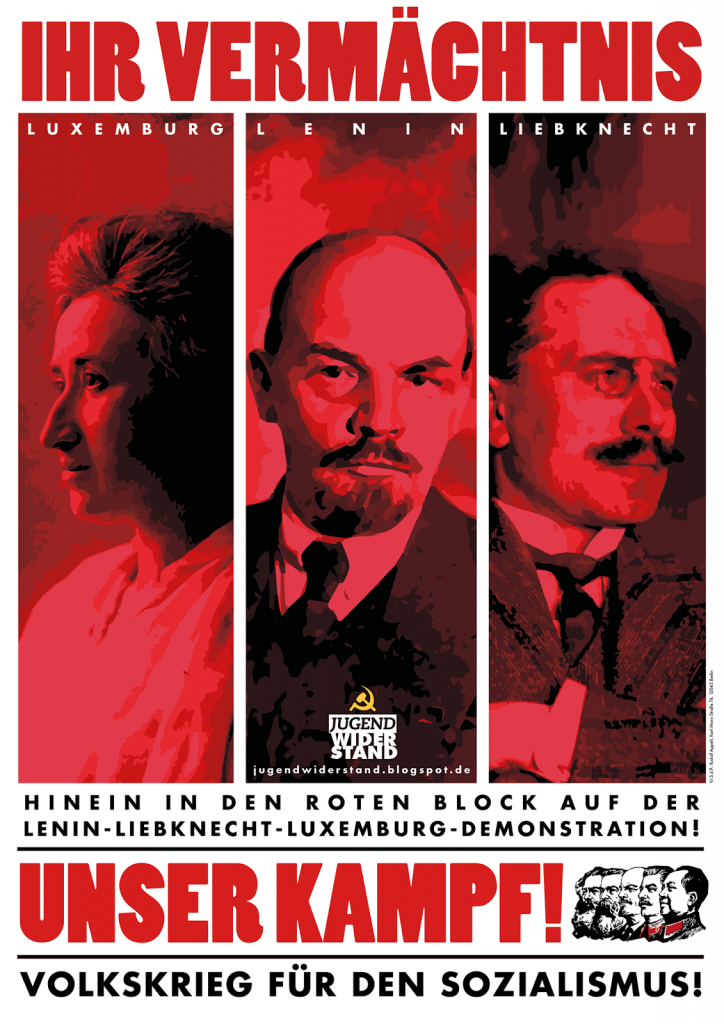 However, we also have today a decisive advantage: We can look to the great experiences of our international class with a full sense of pride. It succeeded in conquering one third of the earth, to storm the sky and to raise the red flag from the Himalayas to the Andes, to build socialism and beat back all aggression from imperialism and fascism in huge countries such as China and the Soviet Union, to carry through the cultural revolution, revolution in the revolution, forging ahead with great steps in the direction of communism. We can and must draw from this the corresponding lessons and conclusions. Today we have the proletarian ideology and science of Marxism-Leninism-Maoism as the all powerful weapon in the struggle. Let’s use it! Let’s accomplish our task of reconstructing the (Maoist) communist party in our country. Let’s fulfil the legacy of Lenin, Liebknecht and Luxemburg in the revolutionary struggle for the power of our class and the freedom of all peoples!

On this day, we honour all of our fallen, the dead revolutionaries and communists who have given their lives in the struggle for liberation from the yoke of capital in Germany, who spilt their precious blood all over the world in order to bring the working class to power, and also the heroes among the masses who in current revolutionary peoples’ wars, such as in India, the Philippines, Turkey/Kurdistan and Peru who sacrifice everything everyday for the victory of the revolution. They all continue the struggle of Vladimir Lenin, Karl Liebknecht and Rosa Luxemburg. Their sacrifice is not in vain – the future belongs to communism!

“Anniversaries for communists and the class conscious part of the proletariat are not meaningless commemoration days, but rather guidelines for the class struggle, manuals for action.” – Ernst Thälmann

In this spirit, we are launching with this demonstration the 2017 year of struggle. It’s a year that will be intensely characterised by contention with imperialism, revisionism and reaction. In July 2017, the imperialists and their lackeys want to organise the G20 summit in Hamburg to plan and negotiate their campaigns against the people and on the back of the people. It will be fought on the streets! Our domestic bourgeoisie will once again terrorise us with a parliamentary election and bombard us with vast amounts of reactionary propaganda. But with that, we’re given the possibility to oppose it with a strong, active election boycott for revolution and communism by workers, youth and the oppressed. In addition, the socialist October Revolution will have its centennial anniversary. While the world openly calls for new revolutions, without a doubt countless revisionist attacks condemning the legacy of the October Revolution will come and be fought back forearmed with Maoism and in the spirit of Lenin.

All attempts to put forth the “October path” as an alleged “ideal revolution model” in contrast to protracted people’s war – the general and universally applicable military theory of the international proletariat – must be put face to face with historical reality: many years of illegal and conspiratorial work leading up to October, a characteristically militarily-structured party of a new type, guerilla activity in the countryside, integration with the masses, armed actions and selective assassinations, seizing of power and dual power, first in a limited area of the country and then prolonged civil war until 1922. This shows with total clarity what chairman Mao Tse-Tung later expanded and developed into our military line and what the highest point of armed rebellion and political takeover of the entire country is: people’s war.

This is why this year we proclaim the slogan “People’s war for socialism!” – not because we don’t think that elements of people’s war are also necessary in the all-encompassing dictatorship of the proletariat and in cultural revolution as the means to our final goal, communism, but rather to make it clear that even in imperialist countries, our military theory – people’s war – is the path of the proletarian revolution. It is the path to fulfilling the legacy of Luxemburg, Liebknecht and Lenin, to break the power of the bourgeoisie, and to establish the new power of the proletariat and the people. The revisionists and Trotskyists of all sorts can moan as much as they want: the legacy of Red October is not prolonged legalism and waiting on day x for the ideal opportunity, which has never occurred and above all never repeated itself. It is in fact the committed and sacrificial struggle for the introduction and development of people’s war in every country!

Let us put forth at the demonstration a clear call for proletarian revolution, against imperialism, revisionism and reaction! To the red block for the Lenin-Liebknecht-Luxemburg demonstration!

Glory and honour to our fallen!
Their legacy – our struggle!
People’s war for socialism!