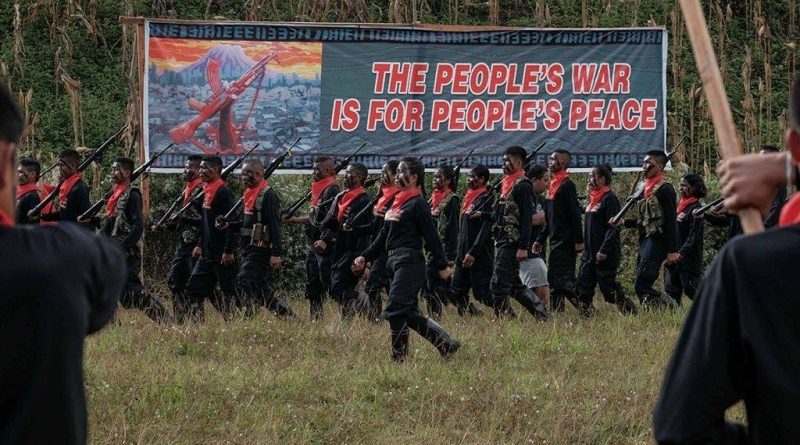 People's War Philippines
December 28, 2016 C. Kistler CPP-NPA-NDF, Ka Oris, new people's army
With utmost respect, we give our highest salute to the Communist Party of the Philippines as it celebrates its 48th founding anniversary.

We honor our fallen comrades and all those who offered their lives in the service of the revolution and the cause of the Filipino people.

The NPA adheres to and consciously upholds the absolute leadership of the CPP over the people’s army.  The NPA owes it to the CPP for what it is now and what it has achieved.

After the CPP’s re-establishment in Dec 26, 1968, it subsequently organized the NPA in March 29, 1969 and guided its growth. With the guidance of the CPP and together with Party cadres, the NPA applied the line of protracted people’s war, its strategy of encircling the cities from the countryside and tactics in both in actual combat and in the over all conduct of waging war.

Starting with just 36 rifles in 1969, the NPA now has thousands of high-powered rifles distributed among Red fighters forming hundreds of platoons and companies nationwide. From its initial mass base in the first district of Tarlac, it now operates in thousands of barangays in more than 70 provinces nationwide and has taken root among the peasant masses. The NPA has an ever increasing capacity to launch bigger, wider and more frequent tactical offensives nationwide on the basis of an ever widening and deepening mass base. It continues to establish, expand and consolidate guerrilla zones and bases.

The CPP taught the NPA how to do mass work through class analysis and social investigation. It has guided the NPA in arousing the masses in the countryside and helping them mobilize and carry out antifeudal struggles and agrarian revolution, build their organizations and militias, and establish the people’s government from one level to another.

In completing both the middle and final phase of the strategic defensive stage, and moving towards the stalemate stage, the NPA is confident and relies on the correct guidance of the CPP to achieve its gigantic general and specific tasks ahead.

Drawing lessons from the advance experience of our NPA comrades in Mindanao the NPA in due time can even up the development of the NPA in the other major islands nationwide.  The overconcentration of AFP forces in Mindanao with the illusion of defeating the  NPA in Mindanao will not only fail but will in fact give more chance for the NPA in Visayas and Luzon to march in step with their comrades in Mindanao.  In due time, we will be able to complete the middle and final phase of the strategic defensive stage and move forward to achieving the strategic stalemate stage.

In the current development, the NPA is fully conscious of the effort of the CPP through the National Democratic Front to forge a just and lasting peace through negotiation with the GRP. The NPA  completely adheres to the spirit and provisions of the Party’s unilateral declaration of indefinite ceasefire. In fact, over the past 120 days, the ceasefire declaration of the CPP has stood because the NPA has been forebearing in the face of provocations and out and out violations of the AFP and other armed forces of the GRP of the spirit of the ceasefire.

However, the NPA is also fully aware that the unilateral ceasefire declaration is becoming untenable because of the failure of the Duterte government to fullfill its oft-repeated promise of releasing the political prisoners and its failure to tame its fascist AFP from committing rampant ceasefire violations and abuses of human rights.

The AFP has stubbornly refused to terminate its Oplan Bayanihan operations and refuses to heed the appeals of the people to withdraw from their barrios. It has carried out treacherous combat operations that provoke NPA reprisals.

In the face of all these, armed skirmishes are bound to break out as the NPA is duty-bound to strike at the provocative combat operations of the AFP as well as to defend the rights and interests of the people and the peace in the areas under the sway of the revolutionary government. In the event that the Party terminates the unilateral ceasefire declaration and orders to carry out offensives, all units of the NPA are ever ready to respond and carry out the order with full force.

In carrying out both our immediate and long term task we rely fully on the guidance of the CPP.  The correct analysis and estimate of the CPP on the current situation and task, we are confident that we will achieve the tasks set forth by the Party.

LONG LIVE THE COMMUNIST PARTY OF THE PHILIPPINES!

ADVANCE THE PEOPLE’S WAR TOWARDS VICTORY!