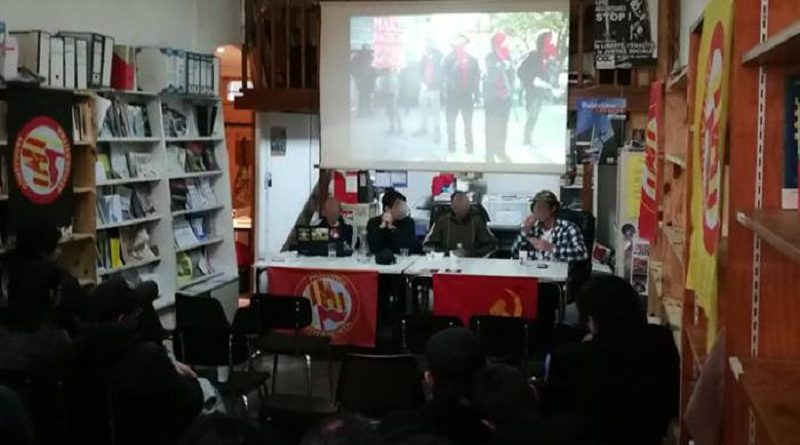 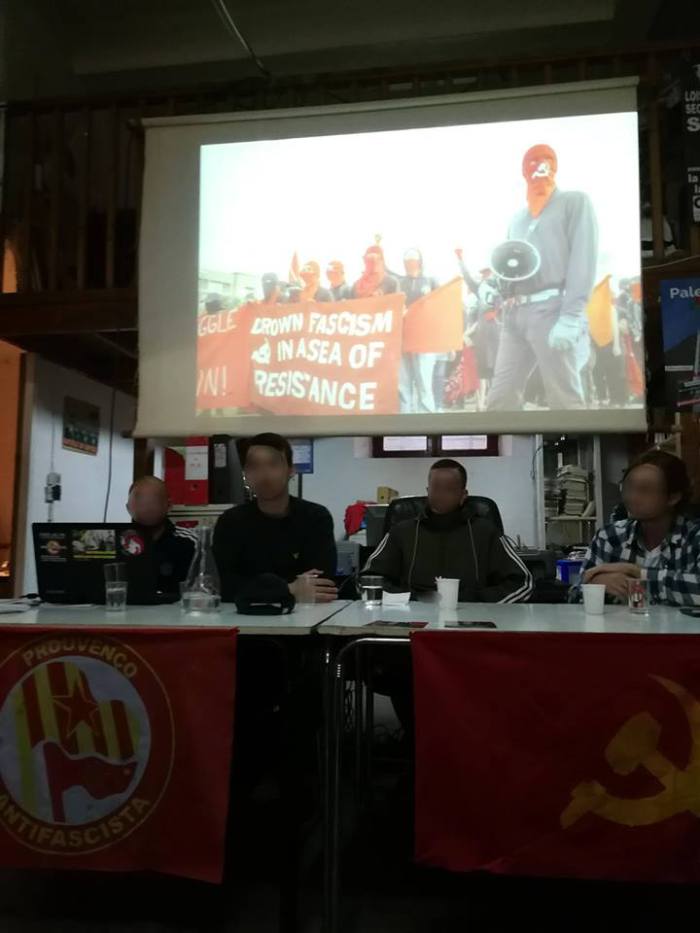 The meeting was organized with comrades from US-based organizations Red Guards Austin (RGA) and Three River Reds (3RR), and was about the antifascist struggles in the US.

We started the meeting with a talk by the comrades from the Committee for the Liberation of Musa Aşoğlu, Turkish political prisoner from Netherlands, accused in the past (once in Belgium from 2005 to 2009, the acquitted) to be a leading member of the DHKP-C. For several years, the US, presented him as a DHKP-C leader, put a bounty for up to 3 millions dollars on his head – the DHKP-C being a revolutionary organization that targeted US presence in Turkey several times, as well as Turkish oligarchy.

Having to live underground, Musa Aşoğlu, now 55 years old, was arrested on December 2 by German police in Hamburg. Musa Aşoğlu has been jailed in Karlsruhe, even though he didn’t commit any crime in Germany, he was arrested only because of Turkish antiterrorist services files – Services infamous for their use of blatantly fake proofs and “confessions” obtained with the use of torture.

The meeting went on with an intervention from a FRAP comrade, that gave examples of reactionary politics implemented by conservative, socialist and liberal governments, that reinforce fascism. National Front was shown as the main fascist threat in the French state.

US comrades then described the antifascist struggle in their country:

“We in Red Guard Austin and Three River Reds were honored to participate in internationalist solidarity with our comrades in FRAP. We are inspired by work of F.R.A.P we presented on conditions of fascism in the USA. Where the crisis of imperialism has cursed a growing fascist populist movement. It is this movement that has put a proto fascist president Donald Trump into office.

We spoke of our experience fighting fascists in Austin and Pittsburgh, the need for Discipline and armed self-defense. Fascists bring rifles in intimidate and attack the people. Self – defense alone is not enough to fight fascism, we must also serve the people we spoke about free food programs, our housing network and about how fascism supports the gentrification of our neighborhoods, we presented on the state repression of our movement, speaking about how the state has tried to frame and even kill our members.

Comrades from Pittsburgh spoke of how centrist and liberal forces attack the antifascists from the inside. How these groups will oppose direct action in favor of bourgeois legalism with the wish to separate the militants from the masses.

We would like to extend warm solidarity to FRAP as well as our Turkish and Filipino comrades who were present at the talk, comrades in the audience presented us with great questions regarding the oppressed nations held captive in the USA. We spoke about how liberation of these nations is necessary to defeat white supremacy and capitalism. Fascism is a problem internationally, in France, Turkey, Philippines and the USA. International resistance and solidarity is how we will defeat the enemies of the people, we are glad to meet such comrades in this fight. Across oceans and borders we all speak the international language of proletarian revolution”

We concluded the meeting by reaffirming the necessity for developing broadly our antifascist and revolutionary front.

We must serve the people, contributing to rise his level of life to make the revolutionary voice be heard.

We announced the launch of our Serve the People program. From next week-end we’ll start food services and distributions, that will be the first step of this program.

We also expressed that serving the people also means attacking those who oppress us, those that the people considers bastards, bosses that fuck with us at work, those in charge of temporary work companies, bosses that are sexists or harass women… The list goes on!

To make them pay is serving the people, it is people’s justice. We’ve to make them learn that they can’t exploit and humiliate us without a price.

We thank all the persons and organizations that came!

From the United States to Marseille, the antifascist struggle is international! 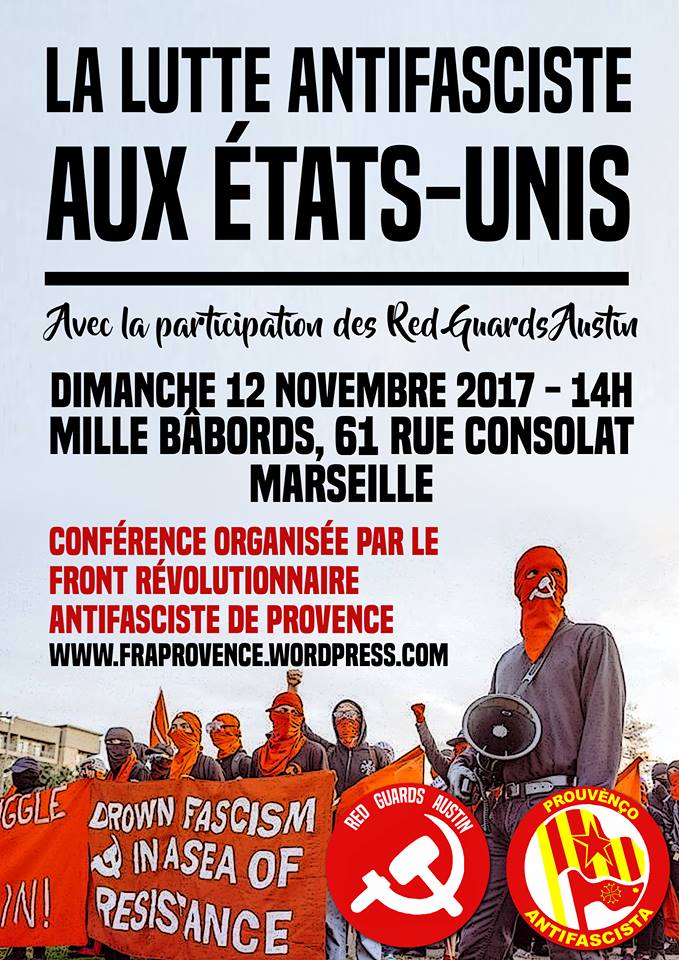