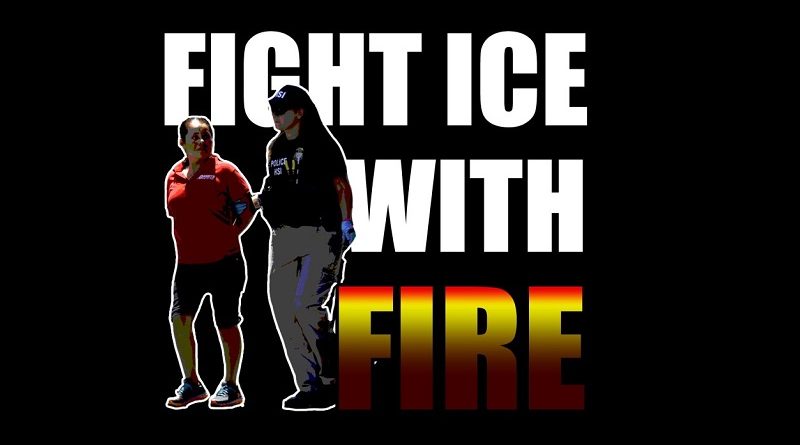 Fight ICE with fire: Against deportations, against the violent contradictions of the U.S. state, toward organizing resistance

As the U.S. capitalist-imperialist state embraces the raw creeping-fascist white supremacy of the Trump administration, including Vice President Mike Pence and Chief Strategist Steve Bannon, the Immigration and Customs Enforcement (ICE) and the Department of Homeland Security are ideologically and materially emboldened, inspired and strengthened.

While this is not a qualitative change to the structure of the U.S. capitalist-imperialist state, (former President Obama still holds the record for deporting the highest amount of immigrants from the U.S., approximately 2.5 million) it nonetheless signals a new era of scapegoating and repression – that is, of masking the violent contradictions of the state.

Recent raid sweeps throughout the country, including in Austin, Phoenix and here in Los Angeles, have resulted in the rounding up of at least 160 immigrants with at least one confirmed deportation of Mexican mother-of-two Guadalupe Garcia de Rayos from Phoenix on Feb. 9.

Under the early period of the Trump presidency, he has made it clear that he is targeting undocumented immigrants with previous or current deportation proceedings, regardless of criminal history – which marks a change from the Obama administration.

This is a show of force and power for Trump’s administration, a flexing of the new administration’s white supremacist muscle, and part of his larger overall plan of honing and increasing repression on immigrants and Muslims, while the Black and trans communities bear the brunt of these attacks.

While not yet fascism, the U.S. is moving with fast-paced desperation to either hide or ignore the growing contradictions of capitalism-imperialism. Trump’s populist, supposedly anti-corruption, pro-(white)people rhetoric speaks to the crumbling economy, offshoring and outsourcing jobs, including from the manufacturing industry, to the disenfranchisement of many workers and families (but strikes an obvious white chauvinist chord with white people and the labor aristocracy in particular) and the need for resolving these capitalist contradictions. The bourgeoisie, with their own internal contradictions and subsequent struggle, is split on how to maintain order. Trump represents the more self-exposing and extreme pole within the bourgeoisie, the camp where fascism is born.

Millions of migrants and immigrants, which are all refugees in one capacity or another (war, neoliberal economic policies, femicide and patriarchal violence against women/non-men within the oppressed-oppressor national relationship.) have permanently and greatly altered the U.S. Using words like “great” or “improving” in the context of America and immigration sells the idea of the settler-colonialist capitalist-imperialist U.S. as something other than in need of violent destruction.

The push-pull nature of immigration in the U.S. reveals, for those still needing proof, the imperialist nature of the U.S. and the contradictions of 1.) its inability to have a long-lasting stabilized home-country workforce caused by a reckless-yet-perfected economic system of commodity production, 2.) capitalism’s necessary dependence on a cheap surplus labor, and in particular the reserve army of labor (where migrants and immigrants are) in and outside of the U.S. 3.) capitalism’s need to have both consumers and workers – workers to afford to consume, and so the forever-balancing act of increasing wages while increasing cost of commodities yet not increasing wages enough to affect the proportionality of the profit extracted from labor.

This particular characteristic of U.S. capitalism-imperialism’s reliance on immigrant labor has reinforced the U.S. economy extraordinarily. But it is nothing new.

Near the very founding, in conjunction with the indigenous genocide, of the settler-colonialist U.S., immigrant labor has been used to build U.S. capitalism, materially and ideologically – by having immigrants be the constant and convenient scapegoat to mask the contradictions of capitalism.

Like historian Hasia Diner has stated in an article published on the U.S. Embassy’s official website – which, ironically or bluntly and proudly – states that immigrants and their collective oppression and exploitation made the settler-colonialist U.S. what it is today:

Like many other settler societies, the United States, before it achieved independence and afterward, relied on the flow of newcomers from abroad to people its relatively open and unsettled lands. It shared this historical reality with Canada, South Africa, Australia, New Zealand, and Argentina, among other nations.

Diner correctly highlights a much often overlooked reality of the role of the U.S. in allowing mass immigration; it wasn’t out of some nostalgic longing for European culture – as the first immigrants were white – or out of some necessity to show the world the goodness of the U.S. to lead by example as a new nation as “a beacon of hope”; immigration was allowed and encouraged because the U.S. economy demanded labor, and the continued (outright as opposed to the modern-day mass imprisonment) enslavement of New Afrikans, Chicanx and indigenous peoples was becoming, more and more, outmoded. The continued necessity of resource-extraction, farming, lumbering, etc., persisted. And it still does today.

Now with the immigration raids currently happening throughout the U.S., the state and its appendages, including many of the class-traitor and white nation-supporter nonprofits, many immigrants not listed in deportation orders are being swept up in house and workplace raids. This is done to boost the numbers of deportations under Trump’s belt, even though ICE claims these raids were planned long before Trump rose to power. Either scenario is unforgivable and an act of state terrorism against the people. ICE and Homeland Security are enemies of the people, particularly migrants and immigrants, and those agencies should be met with the rage and fire of proletarian and revolutionary organizations and bold acts of resistance.

Like the comrades in Phoenix who risked bodily harm and arrest (and many were) by obstructing ICE vans – with Guadalupe Garcia inside, this tactic should be replicated but enhanced. It should be noted that revolutionary obstruction, sabotage and other forms of direct action have been employed by undocumented militants in the past. And so immigration raids should continue to be met with obstruction. Immigration officers and federal pig-agents should be turned away, if and when possible. ICE vans should not be allowed to move an inch. Revolutionaries and radicals should put their bodies, if able, on the line literally. Especially folks with citizenship. But not just one or two. Hundreds, thousands. Connections with progressive lawyers should be created or kept and maintained – with necessary and consistent fundraising for bailing comrades out. The streets should be blocked. Entire neighborhoods should pour out into the streets to demand that ICE leave the community and or to release immigrants caught up in raids. Progressive media, especially Spanish-speaking media, should be called to immediately respond. Religious organizations and progressive pro-immigrant organizations and labor unions (not the white-supremacist labor aristocrats of the Teamsters, the International Union of Operating Engineers, the Laborers’ International Union of North America or other AFL-CIO unions who prioritize their own well-being over the indigenous and immigrant and migrant communities) should be called to immediately mobilize.

And all this has to be done under the discipline and centrality of defending a community under attack by the state and its supporters through their direct participation and guidance. We call this a united front, principally against fascism. What we don’t need are roving groups of activists going from protest to protest with no clear ideological unity or strategy, elevating tactics – even militant ones – as a supposed strategy. We call this movementism.

Red Guards – Los Angeles help found a new coalition, Smash Fascism – Los Angeles, to unite all who can be united in confronting fascism and the repressive state apparatus.

All neighborhoods should be mobilized to protect themselves, especially against ICE. Build the fire of proletarian and revolutionary organizations to fight ICE! All progressives, radicals and revolutionaries should unite to grow the united front against fascism and grow Smash Fascism – Los Angeles’ committees!

Fight ICE with fire!
Fuck Trump!
Fuck the pigs!
Build up the united front against fascism!
Build up the rapid-response committees of Smash Fascism – Los Angeles!