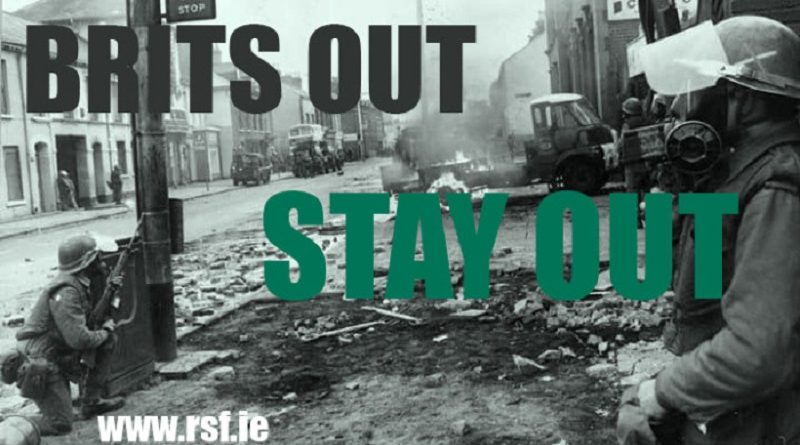 “Overseer for the British government in occupied Ireland, James Brokenshire recently stated that, “the current focus is disproportionately on those who worked for the state – former members of the armed forces and the RUC, the vast majority of whom served in Northern Ireland with great courage, professionalism and distinction.”  He was speaking in reference to historical investigations.

The people of Derry know all about the courage, professionalism and distinction of the British Army. For example, no one has been persecuted for the murder of 14 innocent civilians shot dead during a civil rights march in 1972.

With this support from English politicians such as Brokenshire it is not surprising then that the British army, so called veterans, in reality men who murdered in cold blood Irish people feel the courage to walk on our streets demanding fairness.  Republican revolutionaries from various groups had organised a counter demo, it was clear Republican Ireland was and is eager to show opposition.

As of this evening, the 9 of February 2017, it has been reported the event is cancelled.

However, whilst this event has been cancelled, let it be noted that Irish People will never accept British boots on Irish soil.  Republican Sinn Féin call for an immediate evacuation from Ireland by this army of occupation, get out and stay out.”

On February 25, Saturday at 1400 hrs Republican Sinn Féin will mobilize on the Falls Road with the message, “Stormont – Get out and stay out”