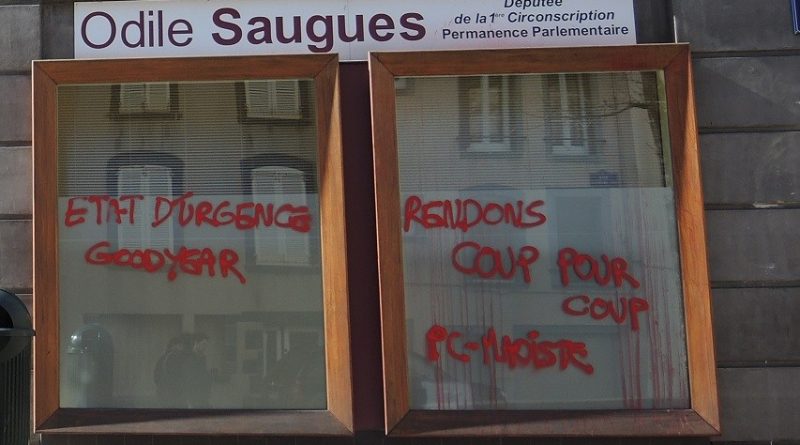 Picture: New action of the PCM against the State of Emergency and in support of the Goodyear workers, targeting the office of the MP of PS, Odile Saugues

State of emergency, forfeiture of nationality, extension of rights for the repressive forces… Once again, the bourgeois parliament voted against the workers’ camp. There is such unanimity among the bourgeoisie that during the vote for the inscription of the state of emergency in the constitution more than 440 deputies were absent: and after that, those are the same people who call on us to go vote in their electoral jokes…

There is nothing surprising about this. The racist and anti-worker government announced the establishment of the state of emergency as a so-called expeditive measure. But very quickly, almost immediately, it was prolonged with the endorsement of all the parliament from the Front National to the Front de Gauche and was called to be inscribed in the current legislation.

In spite of timid protestations on a part of the left who tries to give the illusion of a democratic game, it is actually the “socialist” party in power that is taking a step further in the process of the establishment of a modern form of fascism. Today, as before, social democracy and fascism are two sides of the same coin, they are complementary parts of the capitalist machinery that is only a source of oppression and exploitation for us, proletarians.

When Holland voted to extend the state of emergency, thus strengthening the generalized policing of the population, it was Marine Le Pen who rubbed her hands. When your political “opponents” set up your program and parrot your ideological positions on the law and the constitution, what kind of opponent are they?

When the government introduces the nationality forfeiture law by targeting binationals, the racist measure par excellence of a stinking populism, which can throw generalized suspicion on a part of our class, migrants or those designated as such, and chaining the other part, the so-called “nationals”, to the interests of the bourgeoisie, it is the National Front and all of the bosses who applaud.

If we listen to the official propaganda, we workers must accept the growing fascism of the State and the racist laws that divide our class, take out the tricolor flag and march behind the interests of the “nation”, and in the name of security, fight against terrorism. Our class should advance, with a revolver to our backs, profiting from only from the interests of our oppressors, while they launch a general offensive against all the social gains won by our elders.

Who are they kidding? They are breaking the labor code, condemning workers who are fighting for their jobs to jail, as in the case of Goodyear, they fire, pursue a policy of economic terror against workers – but on behalf of a so-called national unity against the terrorism we should support them and accept it without any protest… And despite the more than seven million unemployed, we are called lazy, when we can’t find work!

Now more than ever, the real terrorists are the bosses, their political puppets and their police watchdogs. The terrorism we are really undergoing everyday is the process of establishing a modern form of fascism, it is the wages of poverty that barely enable us to survive and feed our families, it is the dangerouns and degarding conditions of work, it is the disabling or fatal accidents that happen in the factories or on construction sites, it is the fear of being unemployed with all the consequences that it entails. Terrorism is when one person dies per day on a construction site, it is when cops arrests trade unionists at their home at 6AM, as in the case of Air France, it is when the doors in our neighborhoods are being shattered for nothing, it’s jail for Goodyear workers. It is also imperialism, the maker of war and mass massacres, which by plundering the peoples of the world creates monsters like DAESH.

Faced with this situation, we call to not bow or lower our heads. We must resist the state of emergency and against racist laws, respond to division with unity behind the interests of the working class. To counter the attacks of the employers by returning them blow for blow, whether against the attacks on social reforms, or within our companies, against employers pressures and the little bosses that make our lives rotten. Fighting against our own imperialism by refusing national unity, refusing to become soldiers for the State, and responding with the proletarian internationalism that has always been the pride of the working class.

When Holland stated that “we are at war”, he was right! By “we”, we have to understand its meaning to be “the French bourgeoisie”. Abroad, it is the imperialist war, as France is constantly increasing military interventions: in Syria, in the Sahel, in Mali and so on. Here, they speak of terrorism as if it wsa falling from the sky, while at the same time the State is waging a war against the masses, especially with this state of emergency and anti-terrorist laws that repress activists, and anti-labor and racist laws!

Class war is declared, the bourgeois offensive is in full swing, we must tighten the ranks behind our Party, the Maoist Communist Party, the only one able to defend the interest of the workers and to fight back against the war against the people led by the bourgeoisie, through a People’s War led by the working class and the masses.

Against the state of emergency, against the rise of fascism, the only solution is the revolution!

Down with the State of Emergency! Down with racist and anti-worker laws!

Join the ranks of the Party and let us together strike blow for blow!