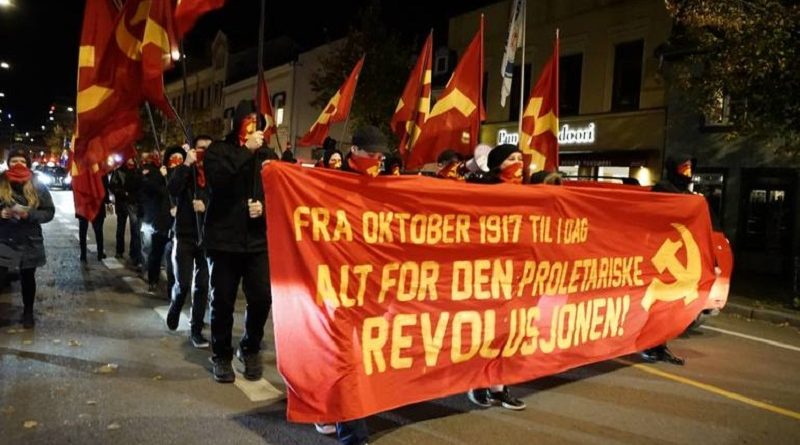 Saturday night on the 28th of October, the October revolution was commemorated with a spontaneous demonstration at Grønland. Grønland is a central, primarily proletarian part of Oslo.

Many people were outside when activists started the action at the Grønland town square. One activist held a speech, while other activists masked themselves with red bandanas, lined up with Tjen Folket’s flags and held a banner with the slogan “From October 1917 till today – All for the proletarian revolution!”. The goal was to mark the 100-year anniversary of the Russian revolution in a militant way, underlining the necessity for new revolutions and new workers states today.

During the preparations for the march, security guards tried to intervene without success, before they preceded to call the police. One inhabitant of the apartment building next to the town square also showed discontent. Local activists have experienced the same person trying to sabotage antiracist demonstrations before, one example being during a protest against police violence.

The speech at the town square gathering summarized the October revolution, the new workers state that was created preceding it, as well as attacking Norwegian imperialism, wars against poorer countries, racism and oppression.

Throughout the speech, many youth and other curious people gathered. There was applause several times during the speech, and several people voiced positive comments to the message being conveyed. Some enthusiastic people from the audience spontaneously joined and masked themselves as well.

During the action, multiple activists diligently handed out flyers and talked to people. The text on the flyer was the following:

“Russia 2017 – Worlds first workers state was established through revolution. 100 years later, the revolution lives on in the people’s struggle and the fight for new revolutions and workers states.

We stand for all power to the proletariat. To the class that works in cleaning, health service, stores, industry and craftsmanship. With power, we can solve all the problems with wars, crisis, poverty, hunger and the destruction of the environment.

The activists got into conversations with several people, and they also gained new contacts. The handing out of the flyers continued throughout the demonstration, when the activists left Grønland town square and marched through the streets at Grønland and Tøyen.

Red emergency flares were ignited during the demonstration, and the activists shouted slogans like “Death to imperialism, people’s war till communism!” and “USA, Terrorist! Israel, Terrorist! Norwegian state, Terrorist!”. Through the megaphone, the purpose of the demonstration was also declared, as well as encouraging people to join the struggle against capitalism.

The end location for the demonstration was “Rudolf Nilsens plass” It is a park dedicated to the communist worker poet Rudolf Nilsen, who died in 1929. He wrote the most prominent communist poetry of his time. Several of those are sung today by Norwegian communists.

With red communist flags, red flares and red slogans, the activists marked the 100-year anniversary of the October Revolution at Rudolf Nilsens east end. On the place where the demonstration was would end.

When the activists arrived at Rudolf Nilsens plass, the demonstration has acquired a tail of blue lights, in stark contrast to the red fire from the flares. The police had gathered their forces and attempted to isolate the activist with the megaphone from the rest of the activists. One activist filmed the incident, and the video has been published on Facebook by Tjen Folket Media. The film shows that there was no troubles with pedestrians, when the police intervened. The activist was quickly set free from the police, the demonstration dissolved and activists ran in all directions.

As this part of Oslo is probably the most policed part of Norway, the police had managed to mobilize many patrols during the span of 15 minutes. Thus, they were able to detain several people. Handcuffs, identification and the customary “good-cop/bad-cop”-routine followed, for the activists that the police managed to catch. One of them remarked that if the flags had swastikas, they probably would have received police escort through Karl Johan instead of this treatment.

Police switched between praising the activists in an attempt to keep things calm, and scaring the youngest participants by saying that the protest was illegal and that it would lead to consequences. The police confiscated multiple flags and red bandanas, and claimed they would be destroyed as they were used in an act of illegality. As usual, they couldn’t refer to any legal basis for this claim.

After some time, most activists were released and were able to continue the celebration of the October revolution with a concert and a party throughout the evening.

Pictures of the demonstration has been published on Facebook, by the page, Tjen Folket Media:

Bourgeois media and the police on the demonstration: Local security guards quickly notified the police about the gathering at the Grønland town square, and both police and media showed great confusion.

On twitter, the police tweeted three messages during the incident:

“We’re at Tøyen with several patrols in conjunction with an illegal demonstration. There are fights at the scene, too.”

“We have control. 15 people detained.”

“One person arrested for violations of our orders, one reported for police conviction and the rest dismissed. No one has been hurt.”

The distortion of reality was propagated in the Media:

“– When the demonstration approached Tøyen, youth that does not like such parades like this in this area, started to gather. Luckily we were quickly on the scene with several units and managed to spread the participants before it escalated,_ says Stokkeli”

From Aftenpostens covering of the case.

The activists didn’t notice any discontent from local youth. On the contrary – there was applause during the speech at the gathering at Grønland, and the demonstration received several positive chants and comments from youth that were there. The activists gained new contacts while handing out flyers during the gathering.

Aftenposten writes that “… the police were not notified of the event and it is therefore a formal infringement” which means that it is not a crime and that the infringement can be settled with a warning. But the police of course threatened the activists with saying that it was an “illegal demonstration” and they especially tried to scare young people and people without Norwegian citizenship..

Nettavisen, TV2 and Dagbladet also wrote about the demonstration, and they all spread the same misleading picture as Aftenposten and the police.

This is of course, is nothing new. Bourgeois media and police consistently spread incorrect notions and distortions regarding our actions and activity. We must build our own Medias and encourage everyone to be very critical of what is written in mainstream media.