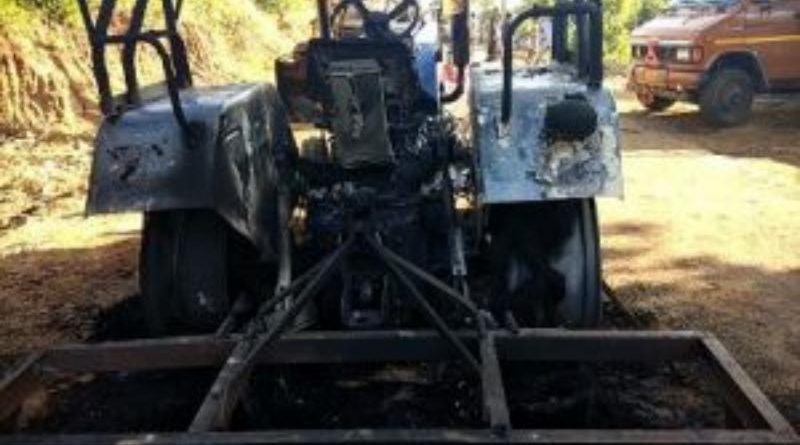 Rayagada: Maoists raided the camp of a construction firm at Narengtola village under Kalyansinghpur block in the district last night and torched at least ten vehicles, protesting a road construction work which was underway. The red rebels also left posters on the spot.

Around 9-10 armed members of the outlawed group barged into Rayagada based contractor Niranjan Sahoo’s construction camp at around 2pm and cornered 10-12 workers who were present at the camp at that time and snatched away their mobile phones. Later, they went on setting up the vehicles kept at the camp on fire, one after the other and fled the spot leaving a few posters.

The posters were spotted with serious notes to construction firm and police against the road construction work and dubbed them as anti-people. They also claimed that the attack followed a notice for the same issued by them, 4 days ago.

Rayagada Police got information on the attack today morning and launched a combing operation in the area.

Informing about the incident, police said the Maoists are opposing the construction of Narengtola-Lakhapadar road for which the contractor had taken a tender a few months ago. The 16 Kilomteres-long road being erected at a project cost of Rs 2.68Cr is expected to play a vital role in boosting connectivity in the area.

Police suspects the involvement of Maoists from Karlapata area of neighbouring Kalahandi district behind the attack as the area is just a few kilometres away from the construction site.