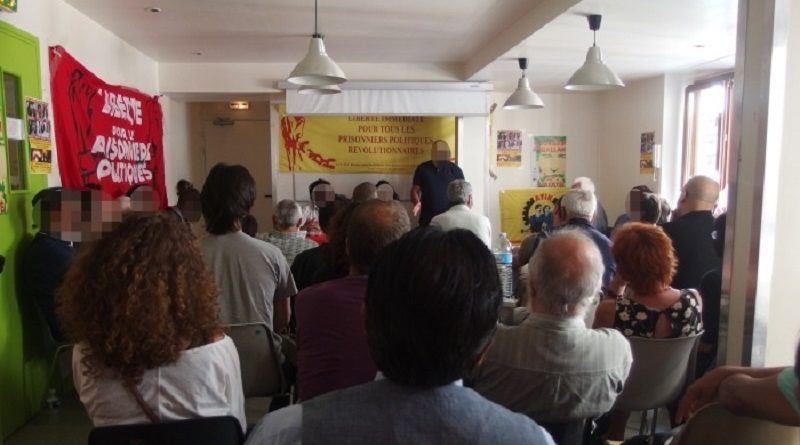 On the 2nd of May 2015, the CRI (red internationalist collective for the defense of revolutionary political prisoners) received an email from the OCML-VP, an organisation which had been hitherto part of the collective. In this letter, the OCML-VP criticised the CRI and stated the reasons for its “withdrawal”. The members of the CRI believe that the message warranted the following response.

→ The OCML-VP was present at the first “plenary” meetings of the CRI, and since then failed to attend ever again (without explanation) until the May 2 2015 – almost five months after they last took part in the collective. As for its participation in one of the working committees –on the subject India – which the OCML-VP claimed it was willing to participate in, it should be noted that the organization sent one of its members to just two meetings. The OCML-VP’s commitment within the CRI was indeed (as given in their own words) “inconsistent”. Incidentally they do not point this out in these terms, since for them the most important thing was “to participate” rather than to act in order to build. It is in this way that organization reveals the position they had held since the beginning: to stand outside of the collective and not actively participate in it.

→ The members of the OCML-VP explain in their letter that their participation in the CRI fluctuated between “mistrust” and “proactive discussion”. However, every communist knows that any entry into the work of a collective cannot be analysed by means of subjective feelings, but rather in terms of objective struggles to be waged inside the organisation to advance its line – that is whether if it is the most advanced and correct line. The OCML-VP made these struggles during the development of the platform by joining in discussions and debates and also making proposals. But thereafter, the commitment of this organization became more limited which ultimately led to a pure and simple withdrawal – and just when the work plans were coming to fruition, when the CRI’s actions were being carried out and when practical lessons were being drawn out – especially those clarifying the rules of how the CRI operates.

→ Furthermore, the way in which the CRI operates was another reason given by the members of the OCML-VP to explain their withdrawal from the collective – in their words “reservations already given about the working methods” of the CRI. This point should be also clarified:
1. It is thus essential to note that there had been no “reservation” expressed on the subject of the CRI’s working methods, for the simple reason that the members of the CRI decide what rules to adopt according to the lessons learnt from practical experience among the masses. These rules are built up gradually, week after week through analytical work of meticulous criticism and self-criticism, and open debates in order to get closer to the truth. But the OCML-VP, given its limited participation, did not attended the group meetings long enough to be aware of the these rules.

2. Furthermore, the OCML-VP also expressed their concerns about the future of the CRI and how it would function on a long term basis. However, the CRI is a collective governed by democratic centralism – not by “good will” as mentioned in the OCML-VP’s email – which means practicing the principle of unity while allowing open debate with constructive criticism and self-criticism. The way in which the conflict of the two lines is managed is correct, as has already been demonstrated by the existence of the CRI and its progress in recent months. The OCML-VP also notes the “extremely high level of political unity” of the CRI platform. However, this high level of the platform is not an obstacle to the consolidation of the connections in the unity. It guarantees the proper functioning of the CRI.

3. The rules of practice governing the relationship between the CRI and its working committees would have only be clear if the members of the OCML-VP had taken part actively in the CRI. The reality of the campaigns undertaken by these committees – on Morocco, India or GIA – demonstrates in itself the correct nature of the choices made and actions taken; particularly since these actions inspire the work of other organizations to commit themselves to identical campaigns without hesitation. Therefore, the work carried out by the committees is enabling in nature: it allows participation in the development of struggles from various angles and methods.

4. All of the remarks made by the OCML-VP – given here and rectified in comparison with the actual reality of the CRI and its functioning – reveal not only their lack of comprehension of the rules that actually govern the collective, but also the erroneous way in which the way the OCML-VP functions in practice. For example, its inconsistent appearances, its “voluntarist speeches” and its political opportunism which leads to sometimes seize the struggles of comrades (see end of article).

→ Finally, we note that OCML-VP claimed that investing in the CRI on the basis of a weekly meeting (which according to them is a “very high meeting frequency”) is such a heavy investment that it should justify the “lack of means” the organisation has working under this framework. Still, all organizations and individuals involved in the collective have “goals and their own means” which do not prevent them from participating in the collective. For our part, we do not have an “occasional” frontline practice abount “subjects of intervention” or “initiatives” under the cover of “invitations”. On the contrary, we build this front every day and in the struggle.

THE OCML-VP ‘S OPPORTUNISM AND SECTARIANISM – SHOWN WITH PRACTICAL EXAMPLES

The OCML-VP thus demonstrates its sectarianism concerning the support of people’s wars, with a saddening opportunistic attitude despite the existence of a communal dynamic for the campaign for support of the People’s War in India.

2. The Campaign for revolutionary political prisoners conducting a hunger strike in Morocco

The OCML-VP was present at the rally in defense of Moroccans political revolutionary prisoners. A few minutes after the event, in a statement, the OCML-VP stated that they had sent a delegation to show support, without specifying by whom they had been called, although the OCML-VP was still supposed to take part in the collective’s “dit”. Moreover, they have posted photos only showing their flags, without showing the central banner nor the flags carried by the comrades from Turkey, or the other members of the collective. All these performances show two things: political manipulation and recuperation, yet another form of opportunism and sectarianism.

It is obvious that the support to people’s wars and revolutionary prisoners will be weakened if each organization follows the OCML-VP’s example , we cannot forget that the purpose of the support is to develop a movement as large as possible, not to make a name for oneself by using the struggle of comrades.