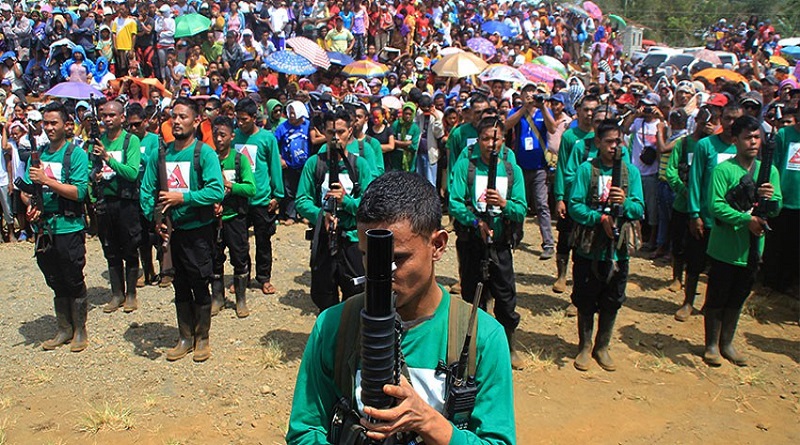 ROME, Italy—Amidst the standing unilateral ceasefire declaration by the Philippine government and the National Democratic Front of the Philippines, a New People’s Army guerrilla fighter and eight government troops were killed in a government operation in Makilala, North Cotabato on Saturday.

He said the troops launched offensive operations in Sitio Lokatong, Barangay Biangan where an NPA unit was staying.

“At around 5:00 pm the 39th IB troops caught up with Red fighters and engaged them in an hour-long firefight which martyred one guerrilla fighter,” Sanchez said.

He added eight government troops were killed in the encounter.

The NPA fighter identified the casualty as 33-year-old Rojit Ranara.

The 10th Infantry Division also confirmed that the recovered war materiel in the area belong to the NPAs under the Guerrilla Front 51.

The Army also said that several “extortion letters signed by a certain Ricardo Fermiza,” an NPA spokesman, were also recovered.

“The driver of the ten-wheeler truck reported that the armed men fired at him and threatened that the management will suffer the consequences if they fail to give in to their extortion demands. After which, the armed men forcibly took the key of the said truck and escaped immediately,” it said.

It added that the police immediately responded and requested the assistance of the military for the pursuit of the armed extortionists who escaped towards Barangay Biangan.

However, the Army denied the allegations that eight soldiers also died during the incident.

“The 10ID invites the public to scrutinize the records of the Makilala (Municipal Police Station), interview the people around the encounter site and check on all hospitals and funeral parlors in Regions 11 and 12 to determine who is telling the truth,” it said.

“It, likewise, continued to mobilize its troops and paramilitaries in various forms of combat operations such as intelligence gathering, combat and psywar in far-flung areas that resulted in harassments; extra-judicial killings of civilians Rita and Norberto Gascon on September 13 in Arakan and Rolan Malignan on November 22 and the enforced evacuation of several families in Magpet on December 6,” Sanchez added.

NDFP peace consultant Porferio Tuna told Davao Today that the situation should be addressed in the third round of talks happening here until Wednesday.

“This has to be addressed in the third round of talks with the loud cry of the people for the continuous violation of the unilateral ceasefire which the GRP declared. The people has not benefited from the ceasefire because of the continuing military operation in the countrysides,” he said.