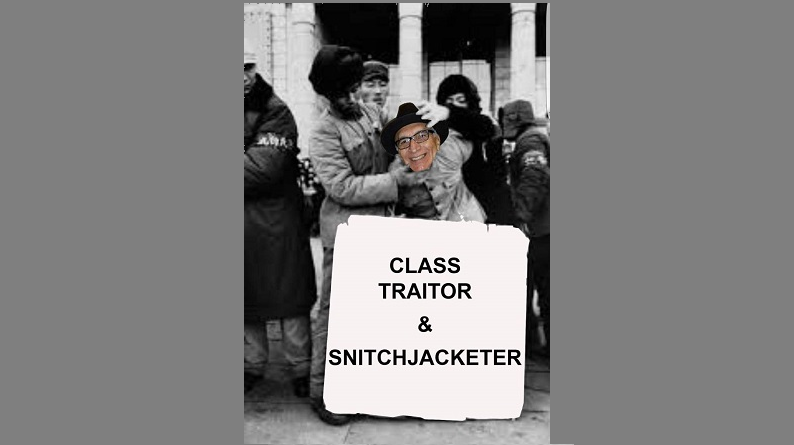 Be with the people, stand against Carlos Montes!

Confrontation and rupture are unavoidable and necessary steps in the long road of political and revolutionary struggle. Nowhere is this more apparent than here in the eastside, in Boyle Heights. Long-time Chicano activist, former Brown Beret, current member of Centro Community Service Organization and supporter or member of Freedom Road Socialist Organization (Fight Back) (FRSO-FB), Carlos Montes has repeatedly attacked members and supporters of Red Guards – Los Angeles (RGLA) through slander, libel, consistent snitch-jacketing (which appears to be standard protocol within FRSO-FB) and even sending his supporters to physically intimidate our supporters and wreck RGLA-affiliated events or actions.

Why is Montes attacking us, you ask?

Two reasons: 1.) his fearing of a growing feeling of irrelevancy around his reformist, collaborationist influence, and 2.) RGLA’s Sept. 20, 2016 summation on the Sept. 17 action led faby Boyle Heights Alliance Against Artwashing and Displacement and Defend Boyle Heights which called out the old ineffective way of dealing with the contradictions of capitalism in Boyle Heights, in which we specifically named him and other “socialists” doing a great disservice to the community by quelling rebelling instead of encouraging it.

In the summation, we stated:

We see this clearly in figures like Carlos Montes, [former] neighborhood council member and leader of Freedom Road Socialist Organization (FRSO) and their community front group Centro-CSO, who uses every instance of community outrage to position himself in front of news cameras, squeeze himself between grieving mothers after their children are murdered by the police, to give another tired and bland speech recycling rhetoric that hasn’t inspired anyone in 40 years. He uses his space at these events to sell the community watered-down, reformist solutions to problems that require genuine revolutionary analysis under the pretense that the community is not ready to hear the truth about the need for armed struggle and revolution, that they are not ready to rebel and engage in direct confrontation with the forces of capitalism that threaten their existence. When the storm of revolution arrives these vendidxs will be washed away in the tide, their newspapers and badges of honor from the “glory days” washed away with them.

Shortly after our summation, Montes and his followers, including Sol Mar, took to social media to immediately call us COINTELPRO/FBI agents, cops and/or violent outsider anarchists controlled by one white man within our organization. An impressive barrage fueled by desperation and political panic.

But let’s unpack this.

RGLA members, as well as members of our mass organization, Serve the People – Los Angeles (STPLA), unfortunately are accustomed to being called cops by bruised and fragile activists. Anytime we attempt to sharpen the contradictions of capitalism, to advance the revolutionary struggle, to expose revisionists, sell-outs, enemies of the people and failed past strategies, we strike a nerve. And like any politically weak individual or organization, they attack desperately, up to and including flailing insults and accusations of their critics being cops.

As STPLA wrote back in April 21, 2016 when editor and publisher of the eastside-based community newspaper Brooklyn & Boyle, Abel Salas, called STPLA cops, snitch-jacketing should be met with zero tolerance because it is a capitalist state tool to undermine, destroy and divide the revolutionary movement. Criticize a group’s tactics or politics, insult them, hate them, paint them in whatever horrible colors you so desire. But don’t call them cops without proof. Snitch-jacketing is an act of vicious laziness. It shows the perpetrator of the snitch-jacketing to be unprincipled, wilfully ignorant and really a danger to the revolutionary struggle. Abel Salas, to his credit, has since apologized publically, both on Facebook and in his newspaper. Carlos Montes, Sol Mar and others – especially of FRSO-FB, have not. They are lazy, desperate vicious wreckers. If they are unwilling or incapable of offering a public self-criticism, they should be isolated for exhibiting dangerous security-risk behaviors.

When Montes and company aren’t calling us cops, they’re usually calling us violent or anarchists or violent anarchists! Well, firstly, what does it mean to be violent? What have we done to merit this description? Because most of our members are anonymous? Because most of our members cover their faces? Because we support direct and militant action and confrontation? Because we oppose city-permitted marches and rallies (liberal parades)? Who have we been violent toward?

Violence is not homogenous; it is hierarchical – and at the very top of that hierarchy is the capitalist state, the sharpest and deadliest violence. Capitalism normalizes its own violence so that it goes unnoticeable. Like rising rent, evictions, foreclosures, hunger, the pigs throwing out street vendor food because they lack a permit, killer cops on paid administrative leave. All that is violence. How we react to it is through revolutionary rage. We have kicked out gentrifiers from Boyle Heights, from Hollenbeck Park and the 1st Street Bridge, and we will continue to do so. You can call that violent. But the community here calls that necessary.

To the centrist, to the revisionist, to the rightist, everything appears far to the left. This is why Montes calls us Maoists anarchists. Montes doesn’t understand that fundamentally it is right to rebel. That is one of the most fundamental principles of Marxism. Montes doesn’t understand that genuine communists, Maoists, instead of talking down to the people and hocking their unread “Party” newspapers at them, should be shoulder-to-shoulder organizing, getting arrested, serving the people, defending the hood.

We are communists. We are Maoists. All of our actions are guided by the need to prepare for the upcoming Protracted People’s War with the capitalist state. And for that, we’re planting the seeds to grow Dual Power, where autonomous proletarian institutions function parallel to the capitalist state. Slowly but surely, we’re building the Party.

Montes, for whatever reason, also resorts to lazy investigation and concludes, due to one or two pictures of one of our white members on Facebook, that we – the vast majority of Chicanx, Mexican and Central American – aren’t intelligent enough to lead ourselves, that we must be under the control of a great white puppeteer. Montes, as a person who claims to be a Marxist-Leninist (a revisionist), doesn’t appear to understand the communist concept of leadership. If our leader was indeed one white man, it would be acceptable because the larger cadre body would have democratically elected that person to their position – based on their leadership skills and political development, not identity. Montes exercising a knee-jerk and classic identity-politics reaction to this while conveniently hiding that his very own organization, or at least one he intimately follows and supports, FRSO-FB, practices a similar line of electing white people to positions of leadership. However, we differ with FRSO-FB (in oh so many ways) because men, especially white men, will always be a minority. Oppressed nationalities, especially womxn and non-men of said nationalities, will always be given priority for leadership development. You can’t make revolution without oppressed nationality womxn and non-men at the forefront.

Furthermore, leadership is not interchangeable with control. The correct method of leadership is political unity, adherence to democratic centralism and practicing the mass line, “from the masses, to the masses,” because we are not leaders without the understanding that the masses are the real makers of history. Not leaders. Not even communist ones.

What is more important? Where someone comes from, their origin, or what they are actually and materially doing in the here and now?

Like the communist understanding of class origin (your family’s class background) versus class stand (the political conviction to chose a side, even if it is not part of your class background), primacy is given to the class stand because it is the conscious choosing of who you will stand and fight with, not merely something you are born into.

It would be interesting to ask what Montes felt about antifascists from all over the world going to Spain to fight the fascists in the 1930s or today in Rojava? Should they just stay at home and know their place? Should they stop imposing their outsider solidarity? Chale. Your politics are weak, liberal and opportunist.

A supporter of Montes came out to a Smash Fascism – Los Angeles public meeting on Feb. 1, 2017 to confront an RGLA supporter at La Conxa after they had confronted Montes earlier in the week for his snitch-jacketing. (Montes  incorrectly assumed this person was an RGLA cadre). The women at the event kept saying she was a gang member and that she had control of the block. Furthermore, she said she would send in gang members to “deal with us.” We can only assume this means physical harm to us and our supporters. RGLA supporters and members de-escalated the confrontation. There was no physical altercation, as the need never presented itself. Most, and now all, of our events will always have a presence of internal security to deal with provocateurs and reactionaries. A sad but necessary precaution, especially with people like Montes and his supporters.

We, RGLA, caution the community of Boyle Heights to isolate Carlos Montes. Don’t let Montes or anyone else tell you your rage isn’t appropriate. Rebel, rebel always! Don’t let Montes call revolutionary communists cops for simply calling out revisionists and reformists! Isolate Montes, isolate FRSO-FB, isolate Centro CSO! If you see Montes, tell him to stop his slander and attacks on RGLA, STPLA and our supporters!