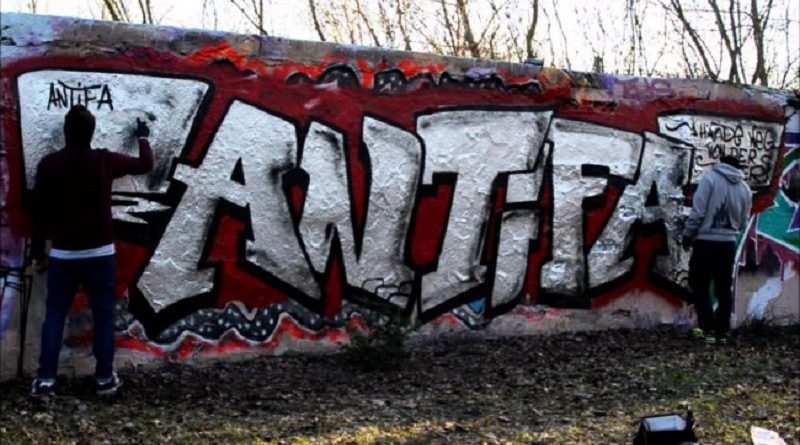 Canada Imperialist States Theory
February 28, 2017 C. Kistler Antifa, Fascism, RCP-PCR
“The proletariat must have a well organised apparatus of self-defence. Whenever Fascism uses violence, it must be met with proletarian violence.”
– Clara Zetkin

Since its original emergence in the early 1920s, fascism as an ideology and a movement has been met with fierce opposition. From the very beginning, communists (along with other leftists) have taken up the cause to not simply resist, but to actively oppose and crush fascism wherever it has cropped up. One such organization, the Roter Frontkämpferbund (“Red Front Fighters’ League”), was formed in 1924 by the German Communist Party as a paramilitary organization to carry out militant antifascist work. In order to continue their militant antifascist work after the Roter Frontkämpferbund was banned, the German Communist Party formed another organization which was the first to bear the name Antifascist Action. Antifaschistische Aktion operated until its demise in 1933 under the violent repression of the Nazi regime, which itself was defeated by the Soviet Red Army in 1945.

A significant resurgence of fascism began in the late 1970s and early 1980s as more white nationalist organizations began to emerge and grow in numbers as capitalism found itself once again in crisis. A severe global economic recession and the widespread adoption of neoliberal policies were fodder for fascists to consolidate their bases within the frustrated working classes. Employing a mix of anti-Semitic conspiracy theories, racism, and ultra-nationalism, fascism began to take shape on the streets in the form of violent, white nationalist groups adopting an aesthetic that mixed their fondness for the Nazis with a co-option of skinhead counter-culture—thus the quintessential “neo-Nazi skinhead”. Some notable organizations worldwide include Combat 18, Blood and Honour, Hammerskins, White Aryan Resistance, and the Heritage Front here in Canada.

As this militant, white-supremacist fascism began to grow during the 1980s, so did the resurgence of militant anti-fascism. Groups adopting the name Anti-Fascist Action (AFA) in the UK and Europe and Anti-Racist Action (ARA) in North America started to appear—the first being the AFA in London, England (1985) and ARA in Minneapolis, USA (1988). While these organizations have often included fighting sexism, homophobia, anti-Semitism, and other forms of oppression within their mandate, combating street-level fascism has been their primary focus.

Like the organizations of the 1920s and ‘30s, these AFA and ARA groups (or simply antifa, as they are colloquially known) consisted of communists, anarchists, and other non-aligned leftists brought together for the express purpose of confronting and preventing local fascist organizing. Whereas the earlier organizations were often formed directly or indirectly by various communist parties as literal fighting forces to defend the working class from fascist violence, antifa organizing in the post-Soviet Union era was mostly disconnected from any larger revolutionary organizing. These groups possessed a policy of “no platform” for fascists, best summarized by the ARA’s first point of unity: “We go where they go. Whenever fascists are organizing or active in public, we’re there. We don’t believe in ignoring them or staying away from them. Never let the Nazis have the street!” Its ideological eclecticism was seen by some as a strength and was credited for the ability to draw in recruits of various levels of politicization.

Due to this antifa model’s disconnection from a larger revolutionary movement such an organization could serve only a limited and relative purpose. Once a local antifa’s aim was achieved, that is to say once the local fascists were decisively crushed to the point of organizational dissolution and thus no longer a threat, the antifa organization ceased to have a purpose. While such victories are of course worthy of celebration, they are only minor victories in the larger context of our collective struggles against capitalism and the various oppressions it inflicts upon the masses and the environment. Once victory against an enemy is won, what becomes of an organization? Without connection to a larger revolutionary movement, all the time and effort put into organizing is now left with nowhere to go. Formerly, anti-fascist organizations would serve as a generic avenue for its members to become more politically developed and be able to move into higher levels of organizing due to its connection with a revolutionary communist party. Without this generic connection and no forces with which to be consolidated, the fighting potential was then lost as members dissipate into other non-revolutionary organizations, if they continue to try to organize at all.

The level of unity require to do antifa work is relatively low. Whether you are a communist, anarchist, or lefty liberal—whether you are categorically anti-capitalist or reformist—as long as you are down to fight Nazis, you’re in. While a low level of unity is well suited for coalitions, united fronts or other ad hoc formations, ideological eclecticism in an organization leaves it prone to strategic problems and bad decisions. For example, it was due to a liberal tendency within the London AFA that a split occurred in 1989. Despite a new formation made up of the more militant members later that year, ideological problems persisted. A pamphlet published by the London AFA in 1991 reveals its anarchist influence by stating “(w)hile AFA must be of, and for, the working class it is not our job to argue how progressive changes can be won.”

Due to the British National Party’s continual defeats on the streets by AFA, the BNP changed up its strategy from the streets to the more respectable arena of electoral politics in the early 1990s. London AFA soon followed suit with their own move, which they called their “Filling the Vacuum” strategy of running candidates to offer constituencies a political alternative. The attempt to have the rest of the AFA Network adopt this electoral strategy, coupled with the decline in street-level organizing by the fascists in favour of other avenues, led to strife within the Network and contributed to its eventual (if not inevitable) break up. With the choice of liquidating into reformist electoral campaigns while facing a decline in relevancy due to the simultaneous decline in fascist street activity, the logical problem of being limited to street-level organizing was brought to a head.

The problems faced by this model of organizing is not specific to antifa; they are easily found in a great number of organizations focused more or less exclusively on a single issue. Fighting fascism is direly important—like fighting police violence, environmental destruction, homelessness, etc. is direly important—but you can’t cure a disease by chasing after the symptoms alone. Defeating street-level fascists does not by itself stop those fascists who are moving amongst the ruling class any more than stopping one pipeline saves a body of water from contamination by other extractive industries. To ultimately solve these problems is to wage a much larger war. As these issues are all symptoms of capitalism, the solution is found in working class organizing in order to take power and thus dictate the society in which we wish to live. We will only do this by connecting anti-fascist, anti-racist, anti-colonial, anti-patriarchal, pro-environment organizing with revolutionary anti-capitalist organizing aimed towards achieving the dictatorship of the proletariat.