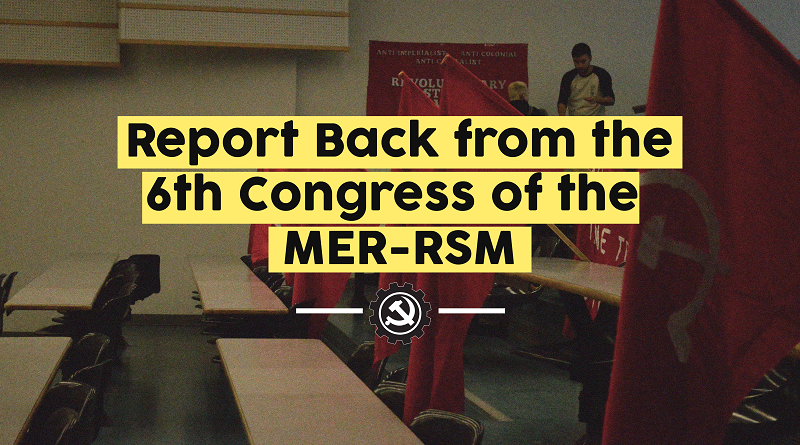 On February 18-19 the MER-RSM has held its 6th Pan-Canadian Congress. Delegates from 14 sections from across the country came to Ottawa to decide on the course of our organization, share organizing experience and reaffirm our commitment to pushing the class struggle forward wherever we organize! Realizing the resolution from the 5th Congress to consolidate and build roots, most of our sections have grown, with some doubling their membership numbers. The MER-RSM remains the largest anti-capitalist student movement in Canada, and we will keep organizing to expand our reach and grow in places where sections are established.

Coming out of this Congress, we have set out clear plans for moving forward. The main short term goal of all MER-RSM sections in English Canada is to work to create general assemblies (GAs) on campuses, in order to make students the highest decision making body in student organizations such as unions, associations and federations. Several sections are already engaged in GA campaigns and plan to intensify their work over the coming weeks. The Congress made explicit another reason to struggle for general assemblies, the ability to build towards an unlimited student strike, in which revolutionary politics will be the leading force. This task is in furthering the commitment of the MER-RSM to build towards a revolution in Canada. To help facilitate section’s struggle for GAs, the Coordinating Committee (CoCo) of the MER-RSM will centralize propaganda and analysis from successful campaigns, and from this develop new materials to aid in the spread of direct democratic student leadership through General Assembly.

The Congress also decided to change the way we view our Transformative Justice Committee (TJC). Initially called for at the 2014 Congress in Quebec City, the committee has been slow to materialize. To rectify this the 6th Congress set out a new plan for an ad-hoc TJC to address complaints against MER-RSM members that may have engaged in patriarchal, transphobic, racist, ableist, etc. behaviour or violence. The mandate of TJC includes a process of investigation, mediation and rectification. All comrades interested in acting for the TJC when the need arises are encouraged to get in touch with the CoCo via their Regional Organizer. In addition, the CoCo will create a list of resources to aid in the work of the TJC and make this list available to the leadership of every section. Any member of the MER-RSM or its periphery who has a complaint that they wish to be investigated by the TJC and CoCo has the right to contact their regional organizer or any Coordinating Committee member and to have that complaint dealt with as soon as possible. We will take all complaints with the attention and seriousness they deserve. Through this mechanism the MER-RSM will realize its commitment to maintaining internally a strong LGBTQ2SIAP+-inclusive, and proletarian feminist culture in both word and action

To advance these same politics externally we will implement the two following resolutions. The Congress directed that wherever possible sections to hold events this upcoming March 8th under the banner of Gender Oppressed Worker’s Day, and to promote a celebration of Proletarian Feminism and revolutionary gender oppressed people. In addition, the MER-RSM will intensify our opposition, in the coming years, to Canadian Association for Equality and other “Men’s Rights Activist” organizing. To guide this the CoCo will centralize and produce guidelines and propaganda for campaigns and actions against these reactionaries.

Other decisions focused on strengthening our organizing locally and further improving our propaganda materials. In the coming year CoCo will produce a plan for organizing at CEGEPs and Colleges, this will expand our organizing in this crucial site of struggle beyond the single section currently at Algonquin College. Also the CoCo will also develop recommended basics and advanced reading lists for the ideological advancement of members and will make these courses accessible on the MER-RSM website.

In fostering a culture of revolution in Canadian schools, the CoCo presented the draft of the first MER-RSM publication – “Classmates”. After discussion and feedback, it was decided that the publication will be released at least once a year, with the first issue being ready for September 2017. This will add a vibrancy to our movement and allow supporters and members to contribute actively to the perspective of the organization be it through art, analysis, or polemic.

Finally, the 6th Congress expressed solidarity with the comrades from RSM Sudbury, who are facing heavy police repression. The MER-RSM unequivocally condemns the outrageous actions of the Sudbury Police and Ontario Provincial Police and offers the support and assistance necessary for our comrades there to continue doing their great work. Further the MER-RSM extends our solidarity to Igor Sadikov, a student at McGill who faces major backlash from McGill’s Student Society and university’s administration for publicly expressing his anti-Zionist views. MER-RSM supports struggles against imperialism and colonialism in Canada and internationally and therefore stand in defence of his critique of Zionism. In this vein, we also affirm our solidarity with the member organizations of the International League of People’s Struggles. Through each of these declarations MER-RSM hopes to build comradery and strength by celebrating others who join us in the fight against imperialism, colonialism and capitalism.

Demonstrating the quality and growth of the organization, our Coordinating Committee now mainly consists of comrades who have not been on it previously. Due to this fact, some responsibilities are going to be shared between several people, in order to ensure a steady transition. Regional organizers will contact their sections shortly to introduce themselves:

Our struggles among the student masses have made us the largest left-wing student organization in Canada. !