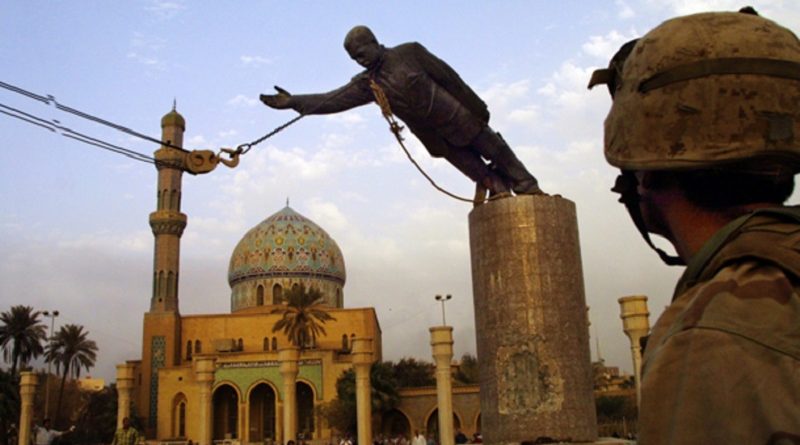 Why is this so?
This text is published as part of Tjen Folket’s campaign leading up to May 1st. The main theme is “Red Block Against Capitalism and War”. More texts are forthcoming. We are organizing Red Block in five Norwegian cities. Do you want to attend? Read more here.

93 percent of young Iraqis see the United States as their enemy. This was revealed in a study by Arab Youth Survey published in April 2016. 250 youths between 18-24 years were interviewed in three Iraqi cities. The survey is bad for the empire… Only 6 percent see the United States as an ally and the remaining percentage did not have a clear position. This is a crushing judgment of the ravages of the imperialist states.

When the survey was conducted, no one under 25 years of age had experienced a day without US bombing, sanctions or occupation. Much has been said and written about the war, but the survey is clear – only the faintest number view the United States as an ally and the war that allegedly “liberated” the Iraqi people has left a legacy of hate and desperation.

On March 20th, 2003 “Operation Iraqi Freedom” was implemented. The objective: To invade Iraq, remove the country’s authorities led by Saddam Hussein and occupy Iraq. The United States occupied the country with 250,000 soldiers. The UK, Australia and Poland join the coalition and help with further troop deployments – respectively contributing 45,000, 2,000 and 200 soldiers each. The bombs fall hard. With brutal means the NATO countries flaunt their superiority against the country’s authorities and in short order the United States takes control of strategically important areas and infrastructure. After only 28 days a statue of Saddam Hussein is torn down in Baghdad (see image above). The pictures of the event fill TV screens and newspapers symbolizing the coalition’s acquisition of the country.

The war didn’t end there as it was only in 2011 that the American troops pulled out. No one knows exactly how many people were killed as a result of the war. According to Wikipedia estimates vary between 600,000 and 1,000,000 lives lost. Ultimately we’ll never know how many lost their loved ones or how many had their lives destroyed. Millions have fled the country. They said it was a war against terror but the terror of the Western occupying powers has been responsible for far more dead and graver consequences. Today civil war reigns the land and the government battles ISIS for control of certain regions. Bombings of crowded areas occur frequently.

Redressing the Motives for War

We were told by the United States that Saddam Hussein had weapons of mass destruction and that the freedom of the Iraqi people had to be secured. Today it is common knowledge that the alleged evidence for these weapons was produced by the American government itself. An equally large lie can naturally be seen in the rhetoric concerning “freedom” and “liberation” for the Iraqi people. The war on terror has, contrary to its stated aims, strengthened militant Islamist groups in the region.

The Iraq war is not an exception but one of many huge disasters in the region where the imperialist United States and NATO countries are involved directly or indirectly.

The media is silent and politicians either support imperial warfare, play stupid or pretend to be unable to see even the most obvious patterns – do we learn anything? Have we really learned that the imperialist countries commit massive assaults against people in the Third World and have we learned to reveal the lies and deception of the warlords?

Warfare against Iraq did not start with “Operation Iraqi Freedom”. The war can be seen as a reopening of the Gulf War which was conducted between 1991 and 2003 as a low-intensity war with sporadic attacks from the United States and the United Kingdom.

The fact that the imperialist countries are fighting for human rights is a lie. Neither in Iraq, Libya nor Afghanistan have human rights become stronger. On the contrary, these countries have been subjected to huge assaults and the aforementioned study’s findings about the strong hatred towards the United States explains a lot. The common denominator among these countries is that they are attractive in the imperialist states’ quest for and control over resources such as oil. These countries allow for the greatest possible influence over strategic areas of control. Iraq is awash in oil resources and while many capitalists have become fabulously wealthy from the occupation of Iraq and the change of power there – it became very unpopular among US taxpayers. Many compared it to the Vietnam war. The area is also strategically important, with many surrounding military bases and neighboring states that are important oil suppliers for the United States. That the war was a failure due to erroneous liberation and peace is based on the fact that these were the real interests of the war.

Terror State USA – but what about Norway?

The United States is a terrorist state, and we must learn to look through the propaganda and explanations of the imperialists. Everywhere they leave chaos, desperation and hatred behind them. Fascist movements are supported to crush rebellions that threaten their resources and political influence. Often, these movements then change rapidly and defend their own interests. It is not only the Taliban, Al Qaeda and ISIS that have been nurtured by the United States. The military juntas and Pinochet in Latin America have also had their support. Israel has lived on US support. Even Saddam Hussein recieved support in the interests of Americans in Iran. There are many examples that can be drawn and the list shows a clear pattern of tyranny being used to serve the interests of imperialists.

But what about Norway? Officially, Norway was never part of the Iraq war but both the state and Norwegian capitalists supported the grotesque war and benefited from it. This was among other things revealed in a documentary by Erling Borgen. The documentary was funded by NRK (Norwegian public broadcasting) who later refused to air it. Furthermore the politicians concerned refused to contribute to the information that Borgen sought. Later, more information has come out. We will come back to this in a later article.

Norway officially participated in Afghanistan and was also the leader in the war against Libya. We speak badly about the United States – but any argument against the United States’ imperialist warfare can be directed against their running dogs in the Norwegian state. Norway has for a long time developed into an aggressive imperialist state with a corresponding economy based on imperialism. After the bombing of Libya, the red-green government received its medal. Jens Stoltenberg, former Labor Party leader, prime minister of the red-green government and the red-green party’s ruling star for several years, was elected as leader of NATO. Recently, the NATO leader clearly communicated to the newly elected President Trump that NATO countries would follow his call to increase their economic and military responsibilities in NATO.

It seems that politicians and the media are not able to learn any of this, but is it so simple? Or is the answer simply that the media does not care, tends to sympathize with imperial warfare and that the Norwegian politicians simply support the terror of the United States? Are the classes that are in political power simply sympathetic and supportive of the bloodbath that imperialism?

War is damn brutal stuff. The most macabre scenes are not edited when you see the war with your own eyes. You cannot forget the war when you’ve seen the consequences for yourself and the feelings are in your nerves and your own heart. We can imagine children who lose their parents, their siblings, and parents who lose their children. We can see for ourselves when we dig for bodies in the piles that are left of what was a house before the bomb went off. But it becomes unreal. It’s inhumane.

The hatred for the imperialist countries is explained as coming from a fear of democracy, low development, brainwashing, Islam and power-hungry state leaders. Imperialist politicians present reality as a clash of civilizations and the imperialist wars as liberation wars. Such an understanding of the world is superficial obscurantism that legitimizes looting. The “white man’s burden” of modern times is no more true than the colonists’ barbaric actions under the pretext of “Christianity” and “civilizing” indigenous peoples in America and Africa. This understanding is euro-centric and denies the grotesque actions the imperialist powers stand for and creates a false picture of the real world conditions.

The story of the 93% of young Iraqis who see the United States as their enemy is a simple story of action and consequence. A simple principle that is being daily undermined by these imperialist liars. Can we understand people as human beings? Can we break with the thinking that the imperialist countries try to create all their peace and justice everywhere in the world but fail because evil forces are in the way?

ISIS, the Taliban and Al-Qaeda are reactionary movements and not an option that points towards justice and liberation. However, the basis for recruitment – hatred of the empire and its robbery is legitimate hatred and a legitimate basis for military struggle. It is precisely in the areas where the ravages of imperialism have been most obscene that strong resistance to the United States and NATO countries is growing. The terror of the imperialist powers is spreading fascist movements that use terror themselves, as we see today in Afghanistan, Iraq and Libya. This mobilization makes it easy for the fascist movements to recruit and when the progressive movements are crushed by the imperialist forces themselves or through military support to the reactionary fascist movements, these are the movements that often stand up to pick up those who will fight. The problem is that these movements are not an option. They are themselves reactionary oppressors who use violence against proletarian, progressive and freedom loving people.

Actions have consequences. It is not a threat but a fact of reality. Even nice dogs bite when they feel threatened.

When the United States is bombing Syria with alleged evidence that the Assad government is behind gas attacks, can we take it for good fish? It is of course possible. But history shows us that the United States is capable and willing to fabricate or stage such spectacles themselves. Targeting Syria is not liberation and the imperialist states have blood on their hands. This time, like so many times before.

93% of Iraqis see the United States as their enemy – but after a look at recent history, can you blame them?