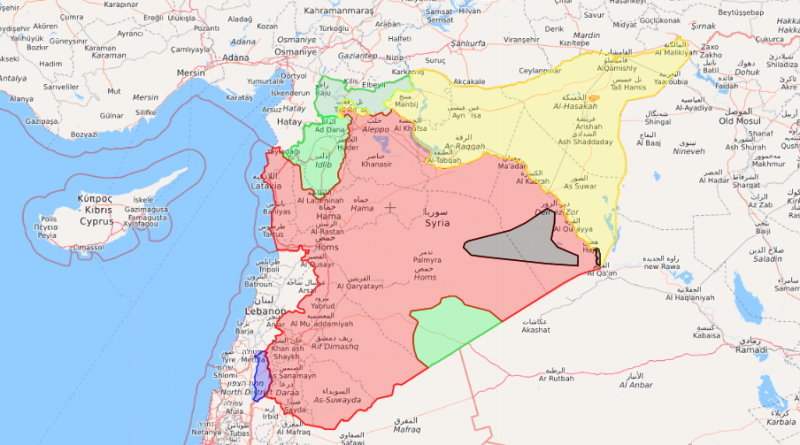 Trump’s recent announcement of withdrawal of American troops from Syria, should not create any complacent feelings; on the contrary it should alert all the peoples of the area. The reason why is because –one way or another- this constitutes the acceleration of the development of conflict between the US and the other imperialists, especially Russia; and of course the escalation of their invasive policy in the area.

Let us not forget that last time the US announced a troops’ withdrawal, that very announcement came with the launching of Tomahawk missiles against Syria and with the even greater intervention of the US to the Syrian front, which, even though much less possible at the moment, cannot be excluded as a possibility.

It is also indicative that this announcement comes with the US underlining (so that there are no misconceptions to any foes or allies) that they are sustaining their ability to face swiftly and decisively any upcoming threat, through their Iraq based troops and assault weapon systems. Even the withdrawal timetable the US announced gives them the potential to calculate the results and even the reactions from their announcement, in order to plan ahead their next steps.

Trump’s administration is, firstly, sending a message that it is continuing with a decisive way the policy of re-approaching Turkey. Besides, it is already stated by an American official, that the announcement was the result of a Trump-Erdogan agreement. Also, in the same wave length the State Department announced the approval from their part of the delivery of the “Patriot” counter-missile system to Turkey, pushing this way its ruling class to cancel the purchase of the Russian S-400.

Therefore, the imminent withdrawal of the American troops from the Syrian North-East territories, if that progresses, constitutes a tactical move of disengagement of the US from the difficult situation of being intermediary between Turkey and Syrian Kurds; tis- potentially- gives the ability to Turkey to proceed with its counter-Kurdish actions. We say potentially because the rest of the members of the “Global Coalition Against ISIS” stated their initial intention to stay in the Syrian North-East areas, but also because one cannot take Russias and Assad’s regime, tolerance for granted, concerning another Turkish invasion (the third in order) to the east of the Euphrates.

That is exactly why we believe that with this move the US are trying to load Russia, Iran as well as the Assad regime for this problem, who up to recently used (with Russia first) Turkeys opposition to the USA “backing up” the Kurds of YPG, so that they form a tactical alliance with the Turkish regime through the Astana Declaration. So, if the withdrawal announcement achieves to drag Turkey back to NATO’s plans, it will heavily question the Astana process, creating conditions that will isolate Russia and Iran.

On the other hand, the European imperialists, England and France are also pressured to redetermine their position in this rather tough situation; they also need to prove if they are able to manage this new situation without the presence of the USA, given the ongoing pressure by ISIS.

Last but not least, dragging Turkey would quickly help a great deal to get past the problems that the formation and development of the anti-Iranian front had shown; this would of course serve the US goal to limit Russia and negate its rise of influence in the Middle-East, a special and critical goal. Israel’s calm and decisive stance shows that the puppet-state of the Americans has taken the affirmation and explanations needed for the reasons behind this move, given during the US-Israel discussions which Netanyahu admitted that preceded the announcement.

Despite the fact that we haven’t been able to see through all the aspects of this move, the acceleration of the developments towards American imperialism targeting Iran (and Russia through that) in order to dominate and control Middle East, gathers the most chances. Without of course excluding the possibility of other plans as well, i.e. the use of this move to further unfold their aggressive plans against the Balkans or Ukraine.

Russia’s statements so far are possibly made in order to earn some time for a better calculation of the USA’s next moves. The British reactions, as well as the reactions among the USA (even between the Republicans), see the real risk of “reading the message” of withdrawal as an acceptance of victory for the Russians, Iran and the Assad regime in the seven-year long conflict upon Syrian land. On the other hand, especially inside the US, the reactions not only want to put on the table the aspect of selling off the Kurds, which will make it more difficult to find willing “tools” of intervention in the area in the future, but they also demonstrate -the equally important aspect- of whether the Americans can trust Erdogan and today’s Turkish political elite to vouch for carrying out their plans. Question which on the other hand the Turkish elite has as well, which 2 years ago faced the US’ role in the -failed ultimately- coup but also with the US plans in the Eastern Mediterranean Sea, the Middle East and Syria which even put her existential issues.

In conclusion, the US announcement of withdrawal from Syria further perplexes the conflict mess. It is an effort to prepare the escalation of the intervention policy in the Middle East and the Eastern Mediterranean. The elements that indicate an update of the anti-Iranian campaign are rather unsettling; and the deportation of the Iranian ambassador and an Iranian diplomat from Tirana after an immediate Albania-US conciliation is by no means a random event.

All of the above should ring the alarm for the peoples of the area who have to make big and decisive steps in order to create an anti-war – anti-imperialist movement to prevent their slaughtering and throw out the imperialists and their local puppets. Our own people have a part in this struggle, as our country is constantly being upgraded as a tool for the American interventions in our area, but also because we have to face the constant reactionary conflict between the Greek and Turkish bourgeoisie, with the dangerous nationalist rhetoric that follows it.