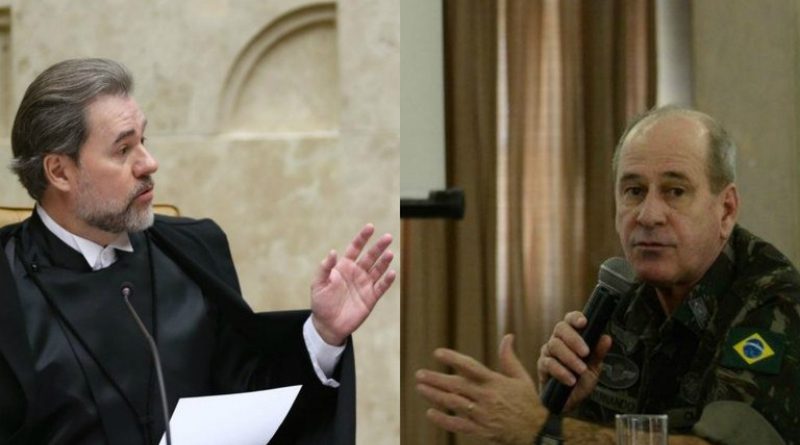 Having assumed the presidency of the Federal Supreme Court, on September 13, Minister Dias Toffoli marked the event with promises of conciliation and the usual clucking about “independence” of the “three powers” and mutual respect.

Words in the wind. In his first testimony, he covered up the illegal act of his deputy Luiz Fux – who suspended the injunction of Minister Lewandowski allowing the Folha de São Paulo newspaper to interview Luiz Inácio, a prisoner at the Federal Police in Curitiba. This decision created deep excitement in the largest body of the Brazilian judiciary, already so discredited by its interpretive acts, very convenient to the reactionarization in progress in the country.

At a conference to mark the 30th anniversary of the already shattered and defiled Brazilian Constitution, at USP’s Faculty of Law, Dias Toffoli took the opportunity to expel this “jewel”: “Today, I do not mean coup or revolution anymore. I am referring to the 1964 movement.” Typical reflection of the oligarchic judiciary of our country and congruent with the acts of those who, invested in the presidency of the highest Court of this outdated bureaucracy, supplants all its predecessors by “inviting” a general to advise. Pathetic, though, not surprising on the part of a careerist coming out of the petista [PT-supporting] angelic hosts, committed to vestal virginity.

He immediately received protest through a repudiation note from the August 11 Academic Center, which triggered a series of repudiations by the victims of torture in the basements of the fascist military dictatorship, relatives of victims, intellectuals and Democrats. In an article in the Folha de São Paulo newspaper on October 9, 2018, even the conciliators of the Truth Commission expressed their indignation, stating that “contrary to what Toffoli enunciated, it is documented that from 1964 to 1985 a an exception regime that tortured, killed or ‘made disappear’ thousands of people – including students, political activists and trade unionists. ”

The article also cites numbers and names related to disappearances and deaths in the holdings of the Information Operations Detachment – Internal Defense Operations Center (Doi-Codi) and agents in the service of this body, arriving at the conclusion: “An authoritarian wave is spreading from the northern hemisphere, particularly from Europe – where neo-fascist and neo-Nazi parties are part of the government coalitions – which is now threatening to ravage Brazil. “

A demoralized judiciary, divided in the interests of the dominant groups and submissive to the purposes of the Armed Forces, is only part of the hideous face of an old decaying State. This is a critical situation in which, under the supervision of the Armed Forces and the American embassy, ​​it seeks to clean up the facade of the State in an attempt to save its appearances and maintain the old order of a democracy and “Rule of Law” for a parasitical minority.

It is worth remembering that, in the absence of the triumphant democratic revolution in Brazil, the old and rotten oligarchies of imperial times continue to maintain and reproduce their necrotic entrails, clothed in new skin from the glossy and shiny facades of the institutions of a rotten state. At all costs, amid the deepest crisis, the big bourgeoisie and landowners, with the pseudomodernity of agribusiness subservient to imperialism, especially Yankee, fought and colluded in saving the old semifeudal and semicolonial order. The power groups of these decadent ruling classes are confronting each other to decide under which of them they will restructure their old state, to save and propel bureaucratic capitalism in general crisis.

Those who are deceived by appearances and who underestimate the message of the 40 million who boycotted and rejected the electoral farce – thus being baffled by such a Bolsonarist wave, a considerable part of which consists of masses who are revolted with all this old order, but who are deceived because they still see no alternative but to vote for someone who appears to be “less worse” – will soon see that all this is part of an overwhelming and violent people’s rebellion that is already in gestation.

Just like the struggles of the peasants for land and the strikes of the workers, servants and public servants; like the demonstrations of 2013 and 2014, the active support for the truck drivers’ strike and the boycott of 40 million; in the same way, under this electoral wave led by the reaction, although deluded as to its motion and course, are contingents of masses who are no longer willing to accept living like they have before. And sooner than many think and disdain, these masses, like those deceived by the opportunism of the false electoral “left” – reformist without any reform – will abandon their illusions and close ranks alongside the masses that are already rising, more united with those who defend the Democratic, Agrarian and Anti-imperialist Revolution.

It is against this rebellion that the military coup of the counterrevolutionary state has been launched in advance. Horned and frantic, the reaction and its coup already surf in this wave. But it will break before it reaches the shore.