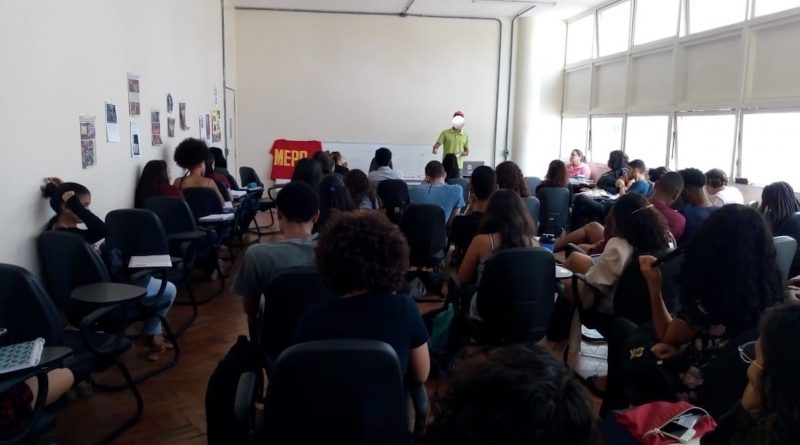 On 11 September, at the Law Department of the Federal University of Bahia, a political act was held in support of the 23 protesters of the June 2013 days and of the protests against the FIFA World Cup in 2014, recently sentenced by the judiciary.

The political act was organized by the Support Committee of the newspaper A Nova Democracia and by the Popular Revolutionary Student Movement (MEPR), with the support of Professor Sara Cortes and with the presence of approximately 40 law students. The room was decorated with posters of solidarity with Dr. Sernas – lawyer of the disappeared people in Mexico for his work in defense of the people -, to prof. GN Saibaba – an Indian Democrat who has been imprisoned for months for his outstanding role in defending the rights of the people and against repression – and to President Gonzalo – leader of the Communist Party of Peru and the Peruvian Revolution, imprisoned since 1992 and held incommunicado under invalid laws of a “self-coup” state.

The lecture began with an explanation by lawyer Vinicius Romão about the abuses and illegalities of Judge Flávio Itabaiana in the conviction of the 23 demonstrators. The documentary A Brazil Without Rights, produced in 2014, was also shown.

One of the speakers denounced that this condemnation reveals the character of the Brazilian old state, a state that does not serve the interests of the popular classes, which uses both legal and institutional aspects as well as non-institutional mechanisms such as militias, telephone tapping, hitmen, etc. to persecute and repress the people.

In the face of the global economic crisis, a political crisis unfolds in Brazil, in which the heaviest exploitation and deprivation of basic rights is carried out on the masses; the masses, in turn, respond with just rebellion, and the old rotten state, unable to appease the conflicts any longer, launches its heavy repression and launches a military intervention as part of the preventive counterrevolutionary military coup plan. This evidence – he concluded – shows even more his demagoguery of “Democratic State” in bankruptcy.

At the end of the event, interventions were opened to ask questions, in order to in search of solutions and ways to organize for the struggles. In one of the responses, it was emphasized that such persecutions always focus on some specific groups or leaderships as part of a repression strategy to ideologically cause pessimism and create fear to undermine the capacity of movements that pose a threat. However, the best way to shield yourself from repression is to organize.