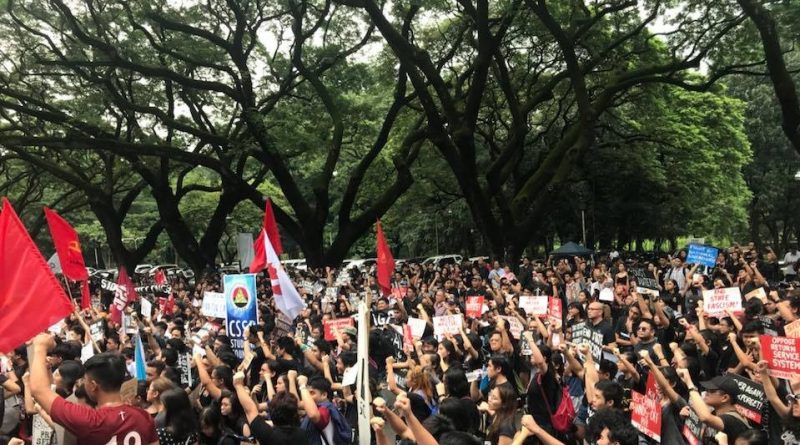 Today, September 21, 2018 let us commemorate the 46th anniversary of the declaration of the dictator Marcos’ martial law by strengthening our fight against Duterte’s martial law in Mindanao and its widespread tyranny elsewhere in the Philippines. Let the sacrifice of hundreds of martyrs of the 20 year Marcos dictatorship and current martial law in Mindanao, be our inspiration in overthrowing the equally despotic US-Duterte regime by intensifying the people’s war.

Much worse than during the Marcos dictatorship, the Philippines is in crisis: the inflation rate is at its highest at 6.4%; the value of the peso is at its lowest at 54php to a US dollar because of the increasing trade deficit; there is massive unemployment with more than 300,000 jobs lost under the Duterte administration resulting to more than 60 million Filipinos wallowing in grave poverty. The bungling programs of the Duterte administration exemplified by the imposition of TRAIN 1 and 2, has contributed so much in the suffering of the people because of the resulting price increases of basic commodities and utilities. The fact that a primarily agricultural country needs to import rice and a nation of more than 7,000 islands imports the poor man’s fish, galunggong, shows an utterly inutile and inept government, unable to feed its hungry people.

The promises of Duterte has been proven all bluster and hot air. It has resorted to the spreading of lies and diversions to cover its blunders, incompetence, corruption and oppression.

Totally abandoning national interests, Duterte is bowing down to his imperialist masters and continue to implement globalization of the economy. It has gifted China with oil exploration in the West Philippine Seas and perpetuates US intervention in the country.

It has failed to end illegal drugs, killed 12,000 small time drug pushers and users, mostly poor and including children, under its war against drugs while big time drug lords continue to thrive.

Corruption is ever more flourishing with the utterly corrupt Marcoses and Gloria Macapagal-Arroyo once again in power along with the Dutertes and their minions. Duterte’s first born Paolo, according to reports, an occasional drug user like his fentanyl addicted father, is connected to the 64 million shabu shipment. The family of Duterte’s right hand man Bong Go is accused of amassing billions through the DPWH projects in Mindanao. Many of his political appointees accused of corruption, have just been reassigned to other government positions. In congress, the corrupt minions of the US-Duterte regime are fighting over control and share of the country’s coffers. Now led by Gloria Macapagal-Arroyo, Duterte allies in congress are shamelessly fighting over billions upon billions of the people’s money.

When leaders are inutile against social ails, they resort to state fascism in an attempt to quell the people’s anger. Like his idol Marcos, Duterte chose martial rule to run the country and ensure the plunder of the country’s resources by foreign and domestic capitalists and entrench himself in power. Duterte relies heavily on the military and police to perpetuate himself, appointing generals in key government positions, turning a blind eye to their blunders and feeding their greed, increasing salaries and defending soldiers and policemen as they commit crimes like torture, rape and massacre of civilians. He has encouraged the use of bandit paramilitaries to wreak havoc in the countryside.

It has turned its back to peace, unilaterally cancelling peace talks with the National Democratic Front of the Philippines (NDFP) and implementing all-out war against the New People’s Army (NPA), declaring its end by the year 2019. It has signed the Bangsamoro Organic Law (BOL) while attacking the Moro people in the guise of fighting terrorism. It tries to suppress the mounting anger of the people through sheer brutality with extra-judicial killings, trumped-up charges and arrests of activists, red-baiting and other vile human rights violations. It is attacking activists and human rights advocates , even the church and the media, in a bid to silence them. He is vilifying international humanitarian institutions, blacklisting and deporting human rights defenders, jailed political opponents like Senator de Lima and is now hell bent in arresting another senator, Trillanes.

The US-Duterte regime has imposed martial law in Mindanao, deploying more than half of its military units with its combat planes, canons and hi-tech military equipment to eliminate barriers against the entry of foreign oil palm plantations and mining in the island. He is responsible for the destruction of the City of Marawi and the killing 1,700 Moro civilians and relentless bombings of other Moro communities. His mercenary armed forces are implementing his order of bombing Lumad communities including schools and has carried out hamletting of communities, food blockades and other grave human rights violations resulting to the dislocation of thousands of Moro, Lumad and farmers. There have been 49 victims of extra-judicial killings, 22 cases of torture, 89 victims of illegal arrest and detention and 336,124 victims of indiscriminate gunfire and aerial bombings documented under his martial law in Mindanao. In Caraga alone, there are 9 battalions currently implementing counter-insurgency campaign plan Oplan Kalayaan, using criminal paramilitary forces and focusing its operations in the coal and mineral rich mountains of the Agusan-Surigao provinces. Such massive militarization have resulted to 10 cases of extra-judicial killings in Caraga, nine of which happened under martial law; 9 forcible evacuations of more than 3,000 individuals mostly from Lumad and peasant communities. 268 civilians are victims of trumped-up charges filed by PNP and military forces against progressives and activists.

Drunk with power, leaders never learn from the lessons of history that tells us that the more brutal the state becomes, the stronger the people’s movement will grow to overthrow such regime.

Contrary to the claims of the military, the NPA has been mounting more and more tactical offensives and has defended guerilla bases against the AFP and the PNP. Despite relentless combat operations and the use of technology such as military drones, it has failed to destroy even a single guerilla base in North Eastern Mindanao Region (NEMR) and has instead incurred several casualties. The Red fighters continue to defend the masses against the brutality of the AFP.

Meanwhile, the people in NEMR continue to resist even under martial law. More and more people are taking to the streets in protests, are exposing the corruption and condemning state fascism. The people of NEMR is joining the mounting clamor for the ouster of the fascist US-Duterte regime.

Let us all unite and oust Duterte and his minions from power through armed struggle and widespread protests and build a truly democratic society.