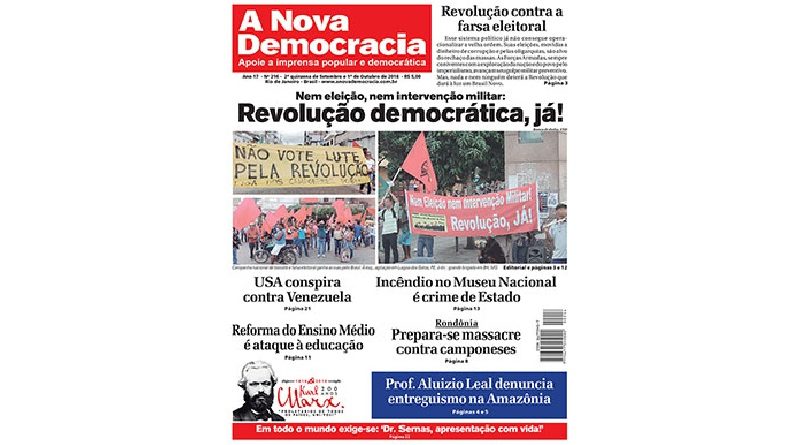 The growing military intervention in national life is trampling on the decisions of the institutions of the old Brazilian State – such as the use of federal troops to suppress popular protests in Brasilia, and thus the threat and coercion of the Supreme Federal Court exercised by the head of the Army, general Villas-Boas, when the habeas corpus was voted for Luiz Inácio; the enactment of the Law and Order Guarantee to intimidate the truckers and popular masses who supported their national strike, as well as intervention in Rio de Janeiro to massacre the poor of the favelas under the pretext of combating “organized crime” – extended even to the fake electoral process. This was done by the same Army commander who “invited” the presidential candidates to a Saturday.  These facts, by themselves, have exposed the chatter about the “Democratic State of Rights” by the defenders of this old order, who deny the landowning / bourgeois and semicolonial / semi-feudal class nature of the old Brazilian state, and show the complete bankruptcy of its oligarchic and corrupt political system.

In order to leave wide open the escalation of military intervention, the same general, in an interview with an organ of the media monopoly, affirms that the result of the elections can be questioned in its legitimacy. It should be emphasized here that in this case the term “legitimacy” clearly assumes the class character referred to above. But it does not cease to sound like a prank, because ever since the decoy of the “Cruzado Plan” (when the country had hardly returned to civil government), the electoral process has been impacted by increasing abstention, null and blank votes of the population disappointed and discredited with successive governments, already occupied by almost all the main acronyms of the Single Party – which are nothing more than mere managers taking turns to serve the interests of imperialism, especially the Yankees and their lackeys, the big bourgeoisie and landowners.

This lack of legitimacy stems directly from the fact that elections are moulded on the basis of corruption and the wholesale money expended by foreign corporations, mainly Yankees, by local banks and contractors. Add to this the fact that the electoral bases of most of the country are dominated by secular oligarchies of slave, semi-feudal and semicolonial origin.

Of course, in a Single Party election like this, the fact that a high command of the Armed Forces raises the question of its outcome is a clear demonstration of the crisis of domination of the exploiting classes, whose fractions and corresponding power groups are framed in a fight to the death for the position of leader of the old and rotten Brazilian State.

For no other reason, the high command of the Armed Forces set in motion a plan, under the rhetoric of the preservation of “democratic institutions”, to create public opinion for its intervention under constitutional cover, since it would be incumbent upon the Armed Forces to defend the “internal order “- that is, the maintenance of the corrupt and rotten institutions of this old state, of the great bourgeois and landowners, servants of imperialism, mainly Yankee.

As it turns out, the irrefutable explosive situation of growing discontent and revolt of the popular masses in the countryside and in the city, with all this rotten situation, makes impossible the peaceful restoration of the old order. This is proven by the uprisings that have occurred since 2013, in which the masses have already sent word that they no longer accept the oppression and plunder they have lived up to now. In fact, the discourse of the general is a prevarication about the preventive counterrevolutionary military coup d’etat to the inevitable general uprising of the Brazilian people.

Using the military intervention in Rio de Janeiro as a laboratory, in which they intensified the reactionary civil war against the poor and black people, they could measure the pulse of the masses. From what we have seen, they concluded that they should increase the lethality of the intervention by increasing the murders of the people in the favelas – a population that has been, in the past, suppressed from basic rights, minimally decent employment and income, minimally decent public services, education, health, security, when extorted by the endless dictatorship of taxes.

Such action, as indeed happened, only diminished the abstract, virtual, and highly publicized prestige of the Armed Forces among the population, as recent studies on the crisis in Rio de Janeiro has shown. They also indicated a drop in the rate of acceptance of military intervention.

Among the laws of the history of class society there is an imperishable axiom: where there is oppression, there is resistance. Therefore, increasing violence against the poor will only increase their indignation and their willingness to find ways to oppose and put an end to oppression.

Therefore, it is not for the Armed Forces of the rotten Brazilian State to take a position on the legitimacy of the rotten electoral process. This right is for the people, who increasingly reject both and echo the slogan of Neither election nor military intervention! Revolution, Already!