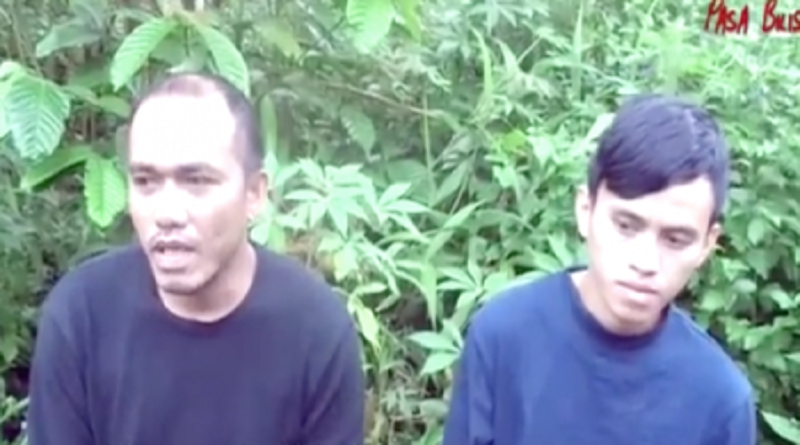 NDFP – Southern Mindanao Region
Press Statement | March 17, 2017
POW Doller, who has been a member of the Civilians Auxiliary Force and Geographical Unit (CAFGU) for 19 years, exposed the truth about their troops’ combat and civic-military operations long denied by duplicitous mouthpieces in the AFP. “When we conduct operations, there are civilians that we talk to. They get scared because we encamp in communities, in barangay halls and in sitios,” Doller said.In a recent video released by the NPA Comval-Davao Gulf Sub-Regional Command, Prisoners-of-War CAA Rene Doller and CAA Carl Mark Nucos assert that the Filipino masses, especially the poor Lumad and peasants living in the countryside, are suffering greatly in the face of the AFP’s all-out war against the revolutionary movement.

Despite clear rules of engagements in the CARHRIHL and other international protocols, AFP troops bullheadedly utilize civilian communities as virtual garrisons in their counter-insurgency campaign.

He added how AFP troops wage psywar and harassment against the hapless civilians in a fascist attempt to coerce information out of them:

“There are also AFP soldiers who are unpleasant; they harass the civilians and interrogate them where the NPAs are. And those masses who are guileless, they look pitiful because they shudder out of fear. There are other soldiers who do not understand the masses, they just harass them.”

In the past month since the all-out war campaign against the revolutionary movement, and with Pres. Rodrigo Duterte’s order to “drop bombs” and “flatten hills” in going after the NPA, AFP troops in the region have gone haywire in committing the most ferocious war crimes against the masses. On March 10, operating troops of the 46IB indiscriminately fired at commuting civilians in Brgy. Caboyoan, Mabini in Compostela Valley. The next day, following the NPA’s successful tactical offensive against said troops, the AFP launched massive aerial strike in the hinterlands of the barangay, destroying communities and farms while close to 500 families of Lumads and peasants evacuated with hardly any belongings with them. Several houses where also ransacked by the marauding troops.

On February 12, Brgy. Bullocan, Laak in Compostela Valley was bombarded by the 60IB with several 105mm Howitzer cannons, prompting more than 300 families to flee their communities. On February 22, residents of Brgy. Fatima, Paquibato district in Davao City were subjected to over an hour of the AFP’s aerial assault.

The AFP’s paramilitaries have also gone on a killing spree of civilians. Peasant leader Willerme Agorde was gunned down by the Bagani in his residence in Pres. Roxas on February 19 while Buyog Bacladan, a Lumad, was killed on February 21 in Magpet, North Cotabato. The Alamara also threatened on February 12 the delegates of a medical and mercy mission who were investigating the epidemic of cholera among the Lumad communities in Talaingod, Davao del Norte.

In Mati City and Lupon, Davao Oriental, soldiers of the 28IB who were conducting so-called rescue operations for the POWs Doller and Nucos trained their guns on farmers Marcial Alameda, Jr. and Eduardo Mandabon. Mandabon was cruelly mauled for failing to provide information on the whereabouts of the NPA.

POW Nucos appealed to AFP troops who are operating in the countryside “to cease their operations because many civilians live in terror, especially when there are encounters close to their communities. Their livelihood are also direly affected.”

Oplan Kapayapaan, like its previous counterinsurgency iterations, not only employs fascist measures but also divisive tactics of pitting the poor against one another. As in the aggressive recruitment of paramilitaries like the Bagani and Alamara that creates schism among Lumads in the region, the AFP enlists CAFGUs as lowly-paid combatants and local assets against their fellow peasants in the countryside.

The two POWs also lamented the miserable situation of working as CAFGUs. POW Doller said that when he joined the service in 1998, they were only paid a meager P900 per month. “This year, 2017, we are getting P4,500.” He further rued, “If we figure into an accident or if we die in combat, our families will only be given P65,000. That’s all they get.”

POW Nucos appealed to his fellow CAFGUs to “leave the service since there are other means of living that we can pursue, and especially to the youth as there are other opportunities for work.” To their principal, POW Doller urged for the resumption of the peace negotiations between the GRP and the NDFP. He added, “I think we should also end the all-out war because it is disastrous to the people, especially those living in the countryside, the poor peasants, so that they may be able to find decent livelihood here. And also, sir, so that Prisoners of War like us may be released immediately.”

The NPA custodial unit of the two POWs is awaiting order for their safe release in consideration to appeals from their families and other well-meaning peace advocates. However, the unit reported that the 28IB is still conducting combat operations that imperil the safety of POWs Doller and Nucos and hinder their speedy release.