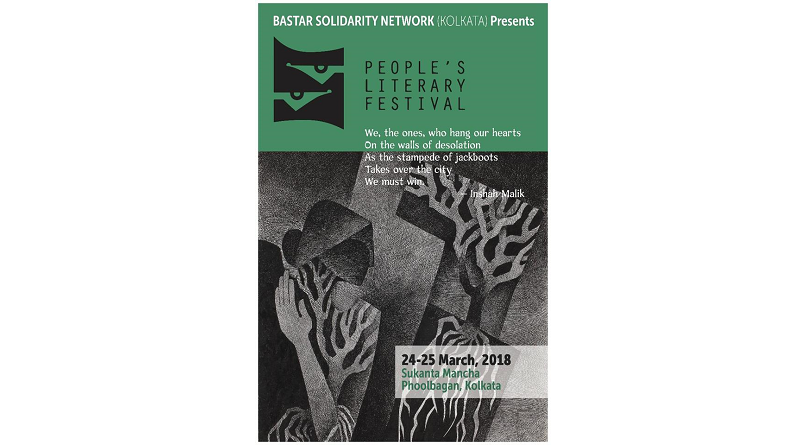 We, the Bastar Solidarity Network (Kolkata) are organizing a program that we are calling People’s Literary Festival (PLF henceforth) on 24-25 th March, 2018. The PLF wants to bring together a range of critical and resistant voices in the field of literary production from various corners of our country. It is clear that over time, agencies of the state, corporate interests and the socially powerful classes have mobilised regularly in tandem to directly silence the voices of critical personalities. Repression, censorship and directly inflicted violence on the producers of critical thought, art and literature have become almost a specialty of our times. However there has also been a barrage of specifically ideological forms of control that has otherwise in much more implicit and effective ways conducted these acts of silencing and the burial of resistance and criticism in the intellectual sphere. One may cite here the changes in school curriculum initiated by the current regime holding power at the Centre, as well as publishing and media houses’ tendency to conform to or to the line of the State- a State committed to the consolidation of a Brahminical culture and absolute obedience to the implications of neoliberal corporate expansionism.

This ideological war by the powerful classes and a State increasingly exhibiting dangerously anti-Muslim fascist tendencies is further bolstered by the Corporate Cultural Responsibility manifested by events such as the Zee Jaipur Literature Festival, the Tata Literature Live in Mumbai, or the Apeejay Kolkata Literary Festival, to name a few. These festivals have now become the gathering ground of an international market for ‘Indian’ literary production.

The People’s Literary Festival is our attempt to orient literature to its critical social function. We are interested in bringing to the fore literature which recognizes the power structures around which our world is built and tries to envisage a way out of these chains forged by imperialist multinational capitalism, patriarchal oppression of women and marginalized gender identities, the foundational machinations of caste, by chauvinistic majoritarian nationalism and its oppression of all questions of self-determination. We will attempt to showcase and generate conversation emanating from writers who have in their own specific ways withstood the grasps of these chains in order to forge words and lines that have withstood and railed against the very historical constitution of these chains. And we want to do this without the diktats of any form of corporate sponsorship.

To make this event successful, we have talked intellectuals and writers who uncompromisingly wrote for people and struggle. They have agreed to advise and convene the event. This, we hope will initiate a necessary journey towards imagining a popular cultural form that will challenge and lay siege to what is dominant.

We would request your presence at the People’s Literary Festival on 24-25 th March, 2018 to be held at Kolkata as we believe your invaluable contribution is essential for the success of the event.

May a thousand such festivals bloom!