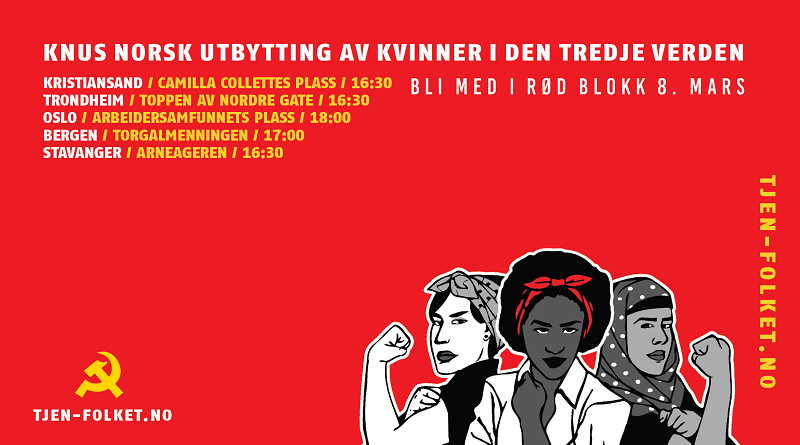 We walk with the main slogan: Stop Norwegian exploitation of women in the third world – women’s liberation requires revolution!

The Norwegian state spreads death over the world’s poorest, for example through the bombings of Libya 2011 and the occupation of Afghanistan wich has been ongoing since 2001.

Together with Norwegian military forces Norwegian economic power is ensured. The Norwegian state is imperialist and an enemy to all proletarian women in the world.

Tjen Folket fights against the state and the capital. We support a revolutionary and anti-imperialist women’s struggle. Real solidarity with the world’s oppressed women must mean struggle against the Norwegian imperialism.

Also in Norway we live in a patriarchy, a system of male domination. This patriarchy is closely linked with Norwegian capitalism and imperialism. The labor market is very gendered, women bear the burden of children and the home, women own less than men and the capitalist class is very male dominated. Women are suppressed through sexual violence, prostitution, body image and beauty tyranny.

Since patriarchy is based on private property and is linked together with capitalism, women can only be liberated through revolution. Only in a communist society a complete liberation of women can be possible. For the revolution we must build red spaces and red power on the streets, squares, schools and workplaces today.