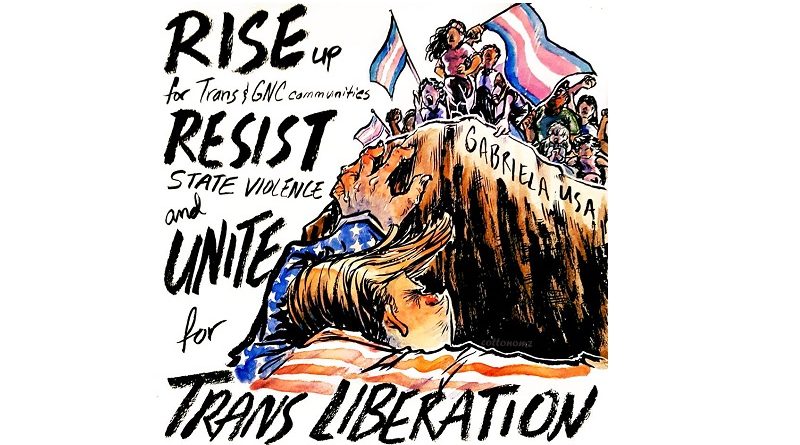 GABRIELA USA is outraged with the Trump administration’s latest transphobic attacks on the Trans, gender non-conforming, and non binary community. On Sunday, The New York Times reported that the Trump administration is considering narrowly defining gender as a biological, immutable condition determined by genitalia at birth. This is a governmentwide effort to roll back recognition and protections of transgender people under federal civil rights law.

Members of GABRIELA USA RISE up in solidarity with the Trans and Gender Non-Conforming community. We RESIST the escalating transphobic attacks, murders and the struggles faced by Trans and Gender Non-Conforming people, including low-income, imprisoned, youth and undocumented trans people of color. We UNITE for Trans Liberation Now and will continue to educate our communities about the need to fight for justice and self determination for all trans and gender non-conforming people, while building safe and supportive spaces.

We recognize the links between state violence against trans people within the U.S. and U.S. militarization globally, which perpetuate transmisogyny and a culture of violence targeting trans, gender non-conforming, and non binary people of color. We will continue to organize to fight for a society in which TGNC people do not have to fear hate violence, police intimidation, losing their homes and livelihood, for being trans. Join us as we fight for a world where Trans Rights are upheld as human rights, and where TGNC people are celebrated in all of their beautiful gender expressions and identities.