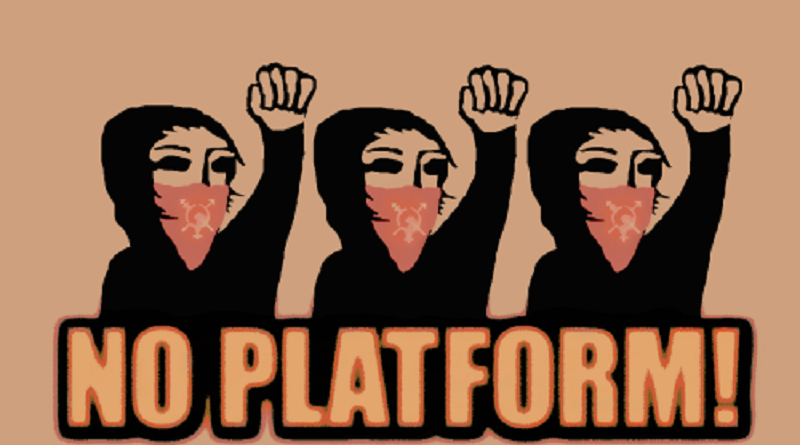 On Sunday, March 5th at 12 PM, three members of RATPAC-ATX disrupted known trans-exclusionary radical feminist Robert Jensen’s talk at the First Unitarian Universalist Church of Austin. Earlier in the week, ATX Resist had found out about Jensen’s talk and told the church to cancel it. The church declined, saying that they want to give a platform to everyone’s ideas, and to back up that claim they offered ATXR a chance to speak in May.

Because of our past positive history with this church during ICE Fuera de Austin’s Let Sulma Stay campaign, we decided to disrupt this event after hearing the news to make clear where we stand:  that although the organization showed solidarity with the LGBT proletariat in the past by providing Sulma Franco sanctuary, staying amicable with anyone who gives room for the state to attack and dehumanize trans people is a clear breach of that solidarity. If the First UU Church of Austin truly wants to stand with the oppressed and toiling LGBT people of Austin, they have to understand the difference between freedom of thought, which we must encourage if we’re to find correct revolutionary ideas, and freedom for hate speech, which Jensen blatantly represents when it comes to trans people. Otherwise, the rainbow flag they fly is a farce. If there’s room for unity between this church and RATPAC in the future, it will only come through struggle and accountability. We are still completely willing to work with the First UU Church of Austin on possible fronts, but they must have full solidarity with the transgender and LGBT proletariat, and they must struggle toward unity with proletarian organizations when they are criticized.

Quickly after Jensen’s talk began, three RATPAC members in the audience stood up in red masks, chanting “When trans people are under attack, what do we do? Fists up, fight back!” As soon as they seized the stage, they were swarmed with angry middle aged men who told them to leave, likening them to the KKK (the irony of which, given the circumstances, is not lost on us), and threatening to call the cops, all while physically assaulting three trans people. The member who was prepared to give the speech against Jensen and the church’s decision to host him quickly began reciting it, moving about the stage avoiding the reactionaries’ attempts. Eventually, two women who thankfully had more authority and sense in them than the men assaulting our members ceded five minutes, even though a few of the men were still adamant that these trans people had to leave and Robert Jensen had to stay. While we wish we could have gone further, we didn’t want to take our chances without the numbers to back us up (and especially given how many arrests our members have faced so recently), so once our speech was finished, our members led a final chant and exited as the threats to call the police continued. Rest assured: next time, we’ll bring more.

Below is a transcript of the speech read by one of the attending members. They were regrettably not able to record our own video of the event because of the short notice on which the action was carried out:

“A year and a half ago, the Revolutionary Alliance of Trans People Against Capitalism stood in solidarity with this church as they allowed Sulma Franco sanctuary while the genocidal US imperialist police state wanted her deported back to Guatemala, where she would be killed for her LGBT activism. We still applaud the decision this church made to stand with Sulma and the immigrant and LGBT people of Austin, and RATPAC is glad that the church accepted our organization’s support. However, solidarity with LGBT people can’t be one sided. By hosting Robert Jensen, who promotes a so-called critical view of trans people, this church is allowing a full platform to someone who aligns with the patriarchal capitalist system and the trump administration when it comes to trans people. You’re giving a voice to someone who actively harms trans people and by extension all oppressed women of the world, including Sulma! This is all while we are in a growing time of crisis for oppressed people, where trans people are a specific target of the growing fascist movement in the US.

Jensen claims to harbor no ill will toward trans people, but in practice, he gives validation and legitimacy to people who want us dead. It doesn’t matter what he claims; what matters is what he does. He sees no humanity in trans people; he sees us as a topic for his thinkpieces. He takes our daily experience of severe oppression and violence at the hands of the capitalist and patriarchal state, and turns it into a debate about whether trans women deserve the same right to access women’s shelters or women’s bathrooms as cis women. Trans people face more patriarchal violence than cis people, but somehow to Jensen, it is patriarchal to allow abused trans women and cis women to share the same spaces and get the same protections. He always tries to mystify his position on trans people, but there’s nothing cryptic about supporting Dan Patrick’s Texas bathroom bill (SB6) that is going through the legislature now, which would see people jailed for entering a bathroom that doesn’t match the sex on their birth certificate.

As a radical feminist, and a trans exclusionary one at that, Jensen will always miss the point. The working class women of the world, both cisgender and transgender, don’t and can’t hold themselves to his intellectual and disconnected standards of what it means to reinforce the patriarchy. He says that reinforcing the patriarchy means performing the gender roles capitalism forces everyone into, but we say that reinforcing the patriarchy means delegitimizing and harming the existence and struggles of cis women and trans people around the world. His stance on trans people and his support for SB6 is incredibly patriarchal. He wants individuals to somehow ‘dismantle’ their own oppression, but RATPAC understands that no form of oppression will be destroyed without a violent and organized fight against the people who profit from capitalism, racism, and patriarchy. We are confident that the most oppressed people in this country and in the world stand with us and against Jensen in that fight. We don’t need radical feminism; we need revolutionary feminism! If you support trans people, don’t listen to Jensen and don’t give him a platform.”