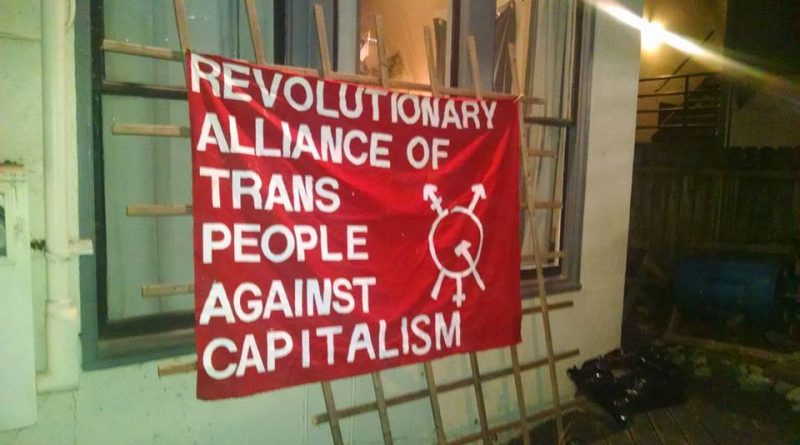 Rainbow capitalists understand that real LGBT liberation is their enemy.

Back in 1970, the Gay Liberation Front of Houston for a brief moment was rocking the Texas political landscape. Quickly after their radical-but-flawed roots were planted, bullshit reformism went about gutting its existence.

These are clippings from a gay-community newspaper regarding the original activities of the GLF-HTX. Among their original demands were full participation of LGBT people in the People’s Revolution, that all people regardless of sex and orientation would share in the labor and products of society based on ability and need (rather than profit), the release of all revolutionary political prisoners, and that the repression of transvestites and cross-dressers be fought with violence.

The burgeoning mainstream Gay Rights Movement was quick to oppose them, even comparing them to nazis (as you can see in the images below from the Nuntius “gay community newspaper”). Among the GLF’s activities in the state, a Methodist Church conference was halted by members demanding reparations for childhood abuse. Gay bars were picketed and seen as increasingly exploitive institutions by rainbow capitalists profiting from gay despair. From the get-go, gay bar owners were vehemently opposed to revolutionary activities that sought to undermine the basis of their money making-scheme.

The GLF-HTX openly called to arms-training and alliance with the Women’s movement and Black Liberation movement on the most militant of bases. At times this included violence, because they had correctly assessed that there is no other way to fight the oppression of LGBT people at the hands of imperialism.

Very quickly, they were surrounded on all fronts by straight and LGBT capitalists alike decrying them as “making things worse” for gay people, while the GLF was adamant that shit’s only getting better for the white and wealthy, not for us folks on the ground. They were decried for their alliance with “Black Panther-type elements”, with even one writer to the Nuntius saying “Beware! They are REDS [communists]!” and another alleging that Black militants had “infiltrated” them. Another article comments that they spent “too much time with their nose in Mao’s little Red Book.”

The GLF-HTX was adamant that the destruction of capitalism-imperialism was the only means by which LGBT people could be liberated. However, quickly thereafter, the failure to root out the capitalists from the national GLF movement took its toll. In 1971, in a conference, the GLF quickly split, with one side demanding that “we are not free until everyone is free, we must join in the Black liberation and Women’s liberation struggle” and that the revolutionary upheaval of capitalism must guide all of their activities. The moneyed interests dominated the gay liberation movement, as they continue to do so today, and said that there need not be a focus on capitalism, or any other groups of people facing the violence of the capitalist state. The old GLF was done away with, in what was considered an alliance between rainbow capitalists and “gay media” such as Nuntius.

Because of the outcome of that conference, the GLF became simply “Gay Liberation”, dropping the “Front” because the new masters of the organization wanted to distance themselves from any revolutionary activities or being associated with anti-capitalist struggle. At that point, their demands became purely legalistic and legislative, deteriorating to nothing but a list of scraps for everyday LGBT people to beg for from the capitalist state. They took towards fighting for the rights of wealthy gay men, the ability to promote business, and even making it a top initiative to do away with age of consent laws… a demand which never previously held any prioroty among the original revolutionary trend of the GLF-HTX’s platform.

By the year after in 1972, the “GL” now attempted full integration by trying to reform itself into a subgroup of the Democratic Party. This was rejected, but their trajectory from then on out was the attempt to appeal to the ruling class through its parties.

By 1973, The Advocate reports, “Gay Liberation Hard to Find in Texas [Now]”, saying that the walking corpse of “Gay Liberation” of Houston (by then called “Gaze”) is fully ran by the “gay media” who “helped disband the original GLF.” Their activities were strictly against political action. Now? Dances, referrals, and a hotline, all operated out of a cozy home in an upper-scale part of town. An upper middle-class “safe space” that had taken the infrastructure and community projects of a previously radical formation, and now turned it into a capitalist friendly non-profit organization… a counterrevolutionary tactic we continue to face today and have even seen ourselves in RATPAC just since our formation.

All of this descent is part of what has left LGBT people closer to fascism than freedom. It shows the profound danger of ever allowing capitalist interests inside of our ranks, and it shows just how much we don’t share interests with wealthy LGBT people. In fact, at every turn, they will dismantle our struggle for power to bring us back into a system that they profit from.

They tremble at the idea of everyday trans people fighting for their own interests, and they have spent decades up ensuring we come to see their interests as our own.

From here, we should look at the reasons why the GLF was not able to fully steel itself against rainbow parasites being able to fully take hold, something that the entire old guard of “gay liberation” was victim to. In learning these lessons and facing these realities, we can forge a movement for POWER together that, stronger than ever, invokes fear in those who brutalize everyday LGBT people, none more guilty of this than the capitalist state itself. 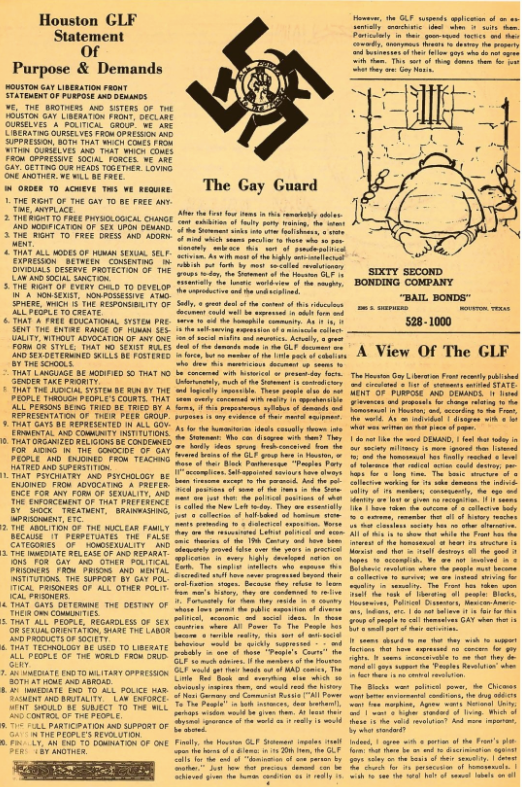 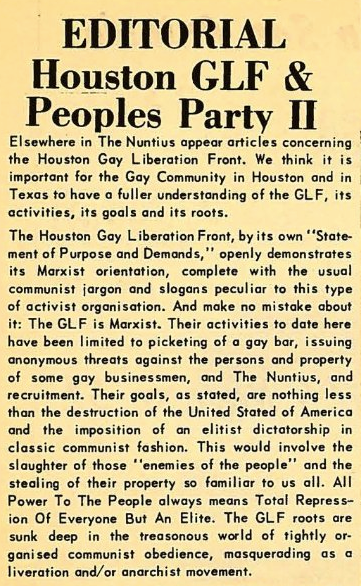