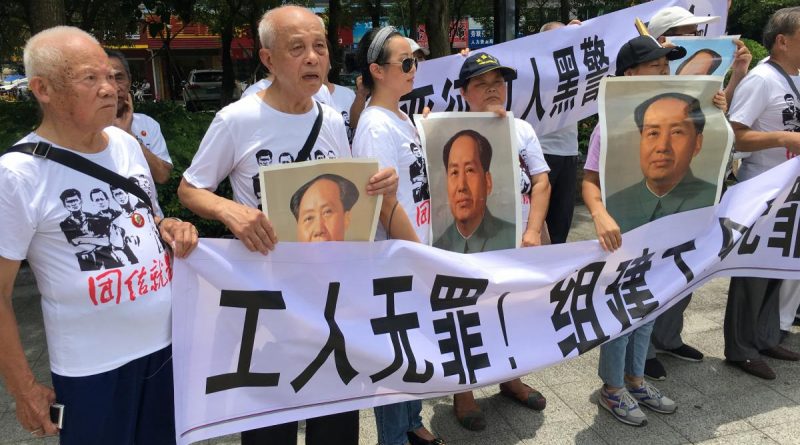 Maoist group backing a workers’ movement in the southern province of Guangdong on Thursday called on the ruling Chinese Communist Party’s official union to stand up for workers’ rights, and work for the release of detained workers and activists.

Yue Xin, a graduate of China’s prestigious Peking University and former #MeToo campaigner remains incommunicado after being detained alongside dozens of others on Aug. 27, the Jasic Workers’ Solidarity Group (JWSG) said in an open letter to the All-China Federation of Trade Unions, which is holding its annual congress in Beijing.

Yue was a key figure in the Maoist group, some of whose members took a job at the Jasic Technology factory in Guangdong’s Shenzhen city to help workers apply to register an independent labor union to represent them.

After a police raid on its headquarters, Yue was believed to have been sent back to her hometown like other activists, but has been incommunicado since, and nobody knows her whereabouts, the JWSG said in a letter sent to Peking University alumni on Oct. 16.

“Yue Xin has been incommunicado for exactly 60 days now,” the letter said. “Anyone who cares about justice in our society, as we do, should be concerned about her.”

The group also called on the ACFTU to support the Jasic workers’ campaign, which had complained to a local branch of the union and been dismissed. The ACFTU has long been seen by labor experts as an organ of the Chinese Communist Party that supports the party’s agenda.

“Workers Liu Penghua, Mi Jiuping, Yu Lingcong and Li Zhan, who tried to form a trade union at Jasic have been held for nearly three months … and illegally deprived of the right to meet with their lawyers,” it said. “The local justice bureau even threatened their defense lawyers, saying that their licenses would be revoked if they continued to defend them.”

The four were all placed under formal arrest by police in the city on Sept. 3, following their initial detention at the factory on July 27.

The letter said workers at Jasic had long complained of abuses of their employment rights, including illegal dismissals and wage deductions, but that the local branch of ACFTU had done nothing.

‘An ant who can be trampled at any time’

They had finally established an independent union, but had been beaten up and later detained for their trouble, it said.

The Civil Rights and Livelihood Watch website said it strongly protested what it called “the enforced disappearance” of Yue Xin at the hands of the government.

“This has created a climate of fear and increased uncertainty in China,” he said. “Actually, Yue Xin is a student who was only doing what the Chinese Communist Party told her to do in standing up for the workers.”

More than 40 years after his death at the age of 82, late supreme leader Mao Zedong still presents a political dilemma to the ruling Chinese Communist Party.

While revering Mao as the leader who founded the People’s Republic on Oct. 1, 1949, the party has been forced to conclude publicly that the leader made some “serious political mistakes.”

Locally funded statues of Mao have been torn down in recent years, reflecting official concerns over the potential use of the Great Helmsman’s image as a focus for millions of poor and dispossessed people in China, including the country’s army of petitioners, many of whom have lost their land or homes to government-backed development.

Government censors have shut down a number of Maoist websites in recent years, but has previously allowed them to reopen after politically sensitive events.