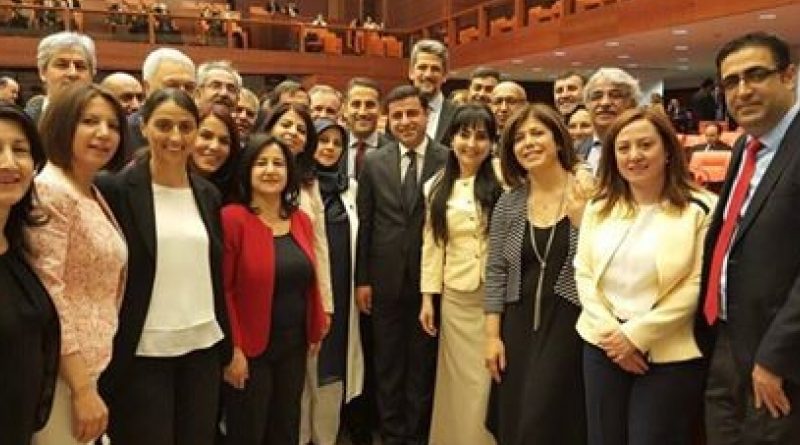 Turkey’s Interior Ministry has confirmed that 11 Peoples’ Democratic Party (HDP) lawmakers have been detained by police in operations across the country tonight.

Those detained include HDP co-chairs Selahattin Demirtas and Figen Yuksekdag.

A source within the HDP confirmed to kurdishquestion.com that arrest warrants have been issed for four other deputies: Tugba Hezer, Faysal Sariyildiz, Imam Tasci and Nihat Akdogan. Hezer and Sariyildiz are thought to be out of the country, while Tasci and Akdogan have not been detained yet.

Reports that arrest warrants have been issued for the detainment of all 59 HDP MPs are said to be false.

The pro-autonomy left-wing HDP’s Mardin deputy Mithat Sancar has called the operations a coup. Speaking on Sterk TV Sancar said they would not “bow down to the government’s fascism,” and added, “the people must come out onto the streets to defend their political will and rights.”

‘More MPs could be arrested in coming days’

Also speaking on Sterk TV, Istanbul MP Pervin Buldan said the detainment of MPs could continue in the coming days.

Another HDP deputy, Ertugrul Kurkcu, has told the BBC that the detentions were “totally unlawful”.

He said: “This crackdown tonight is nothing to do with procedural law, criminal law, any law whatsoever or the constitution. This is an unlawful hijacking of HDP parliamentarians.

“The Turkish government is heading towards a dictatorship of Nazi style [sic].

“Will the Turkish government abide by the internationally accepted standards of parliamentary democracy? This is the basic question.”

The house raids and detainments have been reported as ‘operations on terror’ by Turkish media.

Turkey claims that the HDP has links to the Kurdistan Workers’ Party (PKK), but the party strongly denies this.