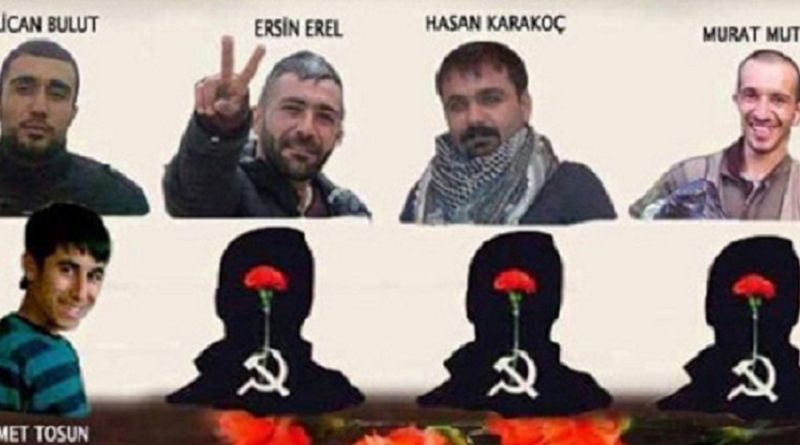 To all Fraternal Parties and Organisations

Eight fighters of Liberation Army of the Workers and Peasants of Turkey (TIKKO) were martyred in in the midst of an intense gun fight with the Turkish military in Ali Bogazi Valley, Dersim. The intense fight that started on November 23rd continued for 6 days.

The peoples’ fighters killed include comrades Ersin Erel, Hasan Karakoc, Murat Mut, Alican
Bulut, Samet Tosun and 3 others that not recognisable due to the extent of their burns.

Despite army’s deployment of hundreds of troops, use of heavy weaponry and tens of military vehicles, our comrades stood their ground and fought for 6 days preventing the army from entering the Valley.

The bodies of the fallen comrades show signs of severe burns. Some of the bodies cannot be
identified as a result of the extent of these burns. The extent of these burns on the fallen
comrades clearly shows the use chemical weapons by the military during these clashes. In
order to cover up this massacre and hide the evidence of the use of chemical weapons the
authorities are not allowing a proper autopsy to be carried out and the families of the fallen
comrades are being threatened.

Clearly the fascist state is terrified of the dead as well. The graves of revolutionaries and
patriots who died fighting the state continue to be vandalised and destroyed. The memorial of the Armenian comrade Armenak Bakirciyan, who was martyred in a gun fight on 13th May 1980 in Karakocan, Elazig was recently demolished under the orders of the governor in Dersim. Another reason behind demolishing this comrade’s memorial is the hate of the state towards the Armenian people. Turkish state is continues to launch similar cowardly attack on the graves and memorials of the Kurdish national fighter’s. Their intended message to Kurdish people with these cowardly attacks is that we will not let you rest in peace even after you die.

Kurdish national movement and the class struggles are growing in Turkey and Turkish ruling classes are terrified of this. Under the guise of the failed coup attempt in July 2016, the AKP government is in fact intensifying its attacks on the Kurdish people, the revolutionaries, democrats and all other progressive forces. All these heinous attacks are conducted while they claim they are fighting against Fethullah Gulen and his organisations. Thousands of democrats and progressive people have been sacked from their posts, many hundreds of journalists, patriots, democrats have been arrested. Amongst those arrested the People’s Democratic Party (HDP) MPs Selahattin Demirtas and Figen Yuksekdag and eight others. Under the leadership of AKP the Turkish ruling classes are intensifying the repression against the Kurdish people.

Since the Rojava revolution in Syria, Turkish ruling classes cannot digest the success gained by the Kurdish peoples. Their plans to invade Rojava by crossing the border to Jarablus have also failed. So they are intensifying their attack against the Kurdish movement within Turkey by inciting blind hate towards Kurdish people. The only way to continue to remain in power is to mobilising the people under its control to attack and intimidate the Kurdish people.

AKP plans to strengthen the dictatorship by moving from current system to presidential system. They are working in with the fascist and racist Nationalist Movement Party (MHP).With the declaration of State of Emergency (OHAL) following the failed coup attempt, the offensive of the Turkish bourgeois against the people has intensified exponentially.

But all these efforts mount to nothing but a futile attempt to remain in power! Fascist state
will not be able to stop the rising public opposition. Neither will be able to halt the progress of Kurdish national movement. Even the imperialist warmongers who openly support the Turkish state will not be able to prevent the utter defeat of Turkish ruling classes.

The death and displacement of hundreds of thousands of people in the ongoing reactionary
wars in the Middle East shows the importance and the necessity of anti-imperialist struggle. Our party has taken its place in Syria along with other revolutionaries from Turkey and around the world to extend our solidarity with the Rojava revolution. Our party is committed to the strengthening and the spread the peoples’ war to realize the Democratic Peoples’ Revolution.

MARTYRS OF REVOLUTION CONTINUE TO LIVE IN OUR STRUGGLES!

DOWN WITH IMPEIALISM, FEUDALISM AND ALL OTHER REACTIONARIES!