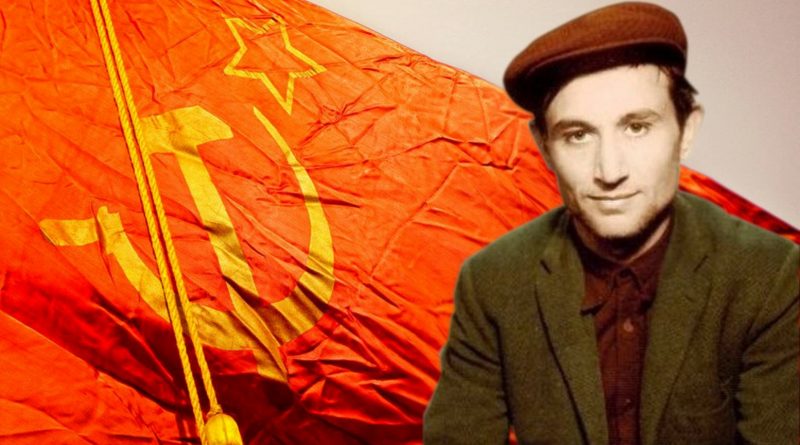 This is the full text of a joint statement issued by a number of MLM parties and organizations to mark the 45th anniversary of the assassination of Comrade Ibrahim Kaypakkaya, founder of the Communist Party of Turkey/Marxist-Leninist. The text was published in English on the website The Next Front on May 18th, 2018. We have reprinted this translation below with minor corrections to the grammar and spelling.

Itʹs the 45th anniversary of the assassination of the representative of the international proletariat in Turkey, the founder of the TKP/ML (Communist Party of Turkey/Marxist-Leninist) Ibrahim Kaypakkaya.

Comrade Ibrahim Kaypakkaya was only 24 when he was murdered by the severe tortures from the fascist Turkish state on the 18th of May. Kaypakkaya founded the TKP/ML when he was 23 years old.

Ibrahim Kaypakkaya succeeded in becoming the permanent leader of the communist idea and the right revolutionary line in Turkey.

He is one of the best disciples of the Great Proletarian Cultural Revolution. He evaluated his own ideas and the TKP/ML, which he founded, as products of the Great Proletarian Cultural Revolution. Back when Marxist-Leninist ideas were active globally, when in the 1960s and 1970s the struggles for revolution and socialism were developing themselves, the class struggle in Turkey was making incredible progress. Especially under the conditions of the 1968 Movement, which encompassed the whole world, anti-fascist and anti-imperialist revolutionary waves formed between students. This movement has reached its 50th anniversary this year. On this occasion, we salute this movement, which made the world shake and stroke fear among imperialism and the ruling powers.

This movement was influenced by Marxism-Leninism and adapted to the revolutionary wave, which developed in the world with the idea of revolution and the assertion of revolution. This period was at the same time a process in which the socialist camp divided Revisionism and Marxist-Leninist foundations. On one side was the Vietnamese resistance, the 1968 Studentʹs Movement and a number of national social freedom struggles, which were set against Imperialism and the reactionary ruling system at an accelerating pace, and on the other side was the struggle led by Mao Zedong in which communists fought Soviet Revisionism and the capitalist-roader revisionism that was taking place in China. Especially the Great Proletarian Cultural Revolution, which was brought to life in China against the bourgeoisie, gave the development of this great revolutionary wave enormous enthusiasm, power and courage. While on the one side the revolutionary processes and necessities were continued and discussed, on the other side along with a deep and staggering ideological struggle debates in context of the problems in socialism were held.

Kaypakkaya has embedded himself deeply into the international proletariat with the class struggle in socialism, his stand on social-imperialism, his persistence on the Peopleʹs War, on his connection with the class struggle and his strong reference to Chairman Mao Zedong. In this context did he take the courageous step of the Naxalite movement in India as a reference. He drew a clear line between himself and the worldwide adventurous and focoist line. By systematizing the communist path-creating leader line, which bases itself on the creativity of the peopleʹs masses, did he manage a break and formed his line with the internationalist spirit and consciousness.

It was here, in middle of this process, that Kaypakkaya took his ideological-political-theoretical form. He was fed by the progressive and rich experiences of the class struggle. But thatʹs not all. He was also influenced by audacity, fearlessness and the theoretical and intellectual thought richness, which would destroy all taboos, which the Great Proletarian Cultural Revolution brought to life. This brought forth that he had strong theoretical discussions with revisionist streams, that he came to clear results in the question of political power, that he correctly analyzed the problems of the society in Turkey, that he took a clear position on the most basic sociopolitical historical topics and that he set the right path and the right line for the revolution. Most notably did Kaypakkaya show the historical and current character of the political regime of the Turkish ruling class with a never before seen clearness. He shook the class cooperative theoretical-political standpoint of revisionism by defining Kemalism as fascism. In reference to the topic of the Kurdish nation he explained it with a Leninist clear point of view with which he drew a sharp line between him and all the progressive, revolutionary and self-proclaimed Marxist-Leninists, which basically contained social-chauvinist positions in its essence. He explained the quality of the revolution as a democratic Peopleʹs Revolution and tried to adopt the line of Peopleʹs War to the country with its theoretical basis and its praxis. He waved the communist flag against the long standing numbing and humiliation of the proletariat and the suppressed peopleʹs masses by revisionism and opportunism. He brought the solution to the historical and social problems, which were presented as true by revisionism, but were wrong in reality, through a complete and determined MLM (Marxist-Leninist-Maoist) position.

He also led the ideological struggle against the revolutionary petty bourgeois focoist movement, which developed under the conditions he was living in. Again he perfected and spread his communist line by the struggle he led against new revisionist viewpoints against the pacifist reformism and liquidationism. The uninterrupted continuation of the ideological struggle has brought a huge contribution in the development and the progress of Kaypakkaya.

He reached ideological clearness, political assertion and theoretical understanding at a young age. His method was Marxist-Leninist-Maoist. His assertion and ideological clearness are the result of the Great Proletarian Cultural Revolution. His understanding and perception are the developments on the level of association with the class struggle. It is a continuing and uninterrupted part of the struggle of the workerʹs movement, of the land occupation by the peasants and the struggle of the studying youth.

His communist and revolutionary attitude led to his assassination when he fell into the hands of the Turkish ruling classes. He still exists as a communist leader through his legacy in the TKP/ML and his programmatic views, which serve this party as a guide. He is still the leading representative of Marxism-Leninism-Maoism in Turkey.

On the 45th anniversary of his death, his mighty legacy, his theoretical richness and his political assertion have permitted the continuation of a tradition, that did not deviate from his line and does not accept any compromises, which went against the great counterrevolutionary wave, which flourished worldwide. He left behind a party and a struggle, which have been connected to Communism uninterruptedly for 46 years.

On the 45th anniversary of his death we commemorate the leader Ibrahim Kaypakkaya with the oath of devotion to Communism, with the devotion to revolution and the devotion for the ideology of the proletariat. And we will continue to commemorate him. He is a good disciple and continuer of Marx, Engels, Lenin, Stalin and Chairman Mao.

Down with imperialism and all reactionaries!

Long live our struggle for the revolution, Socialism and Communism!

Committees for the Foundation of the (Maoist) Communist Party – Austria