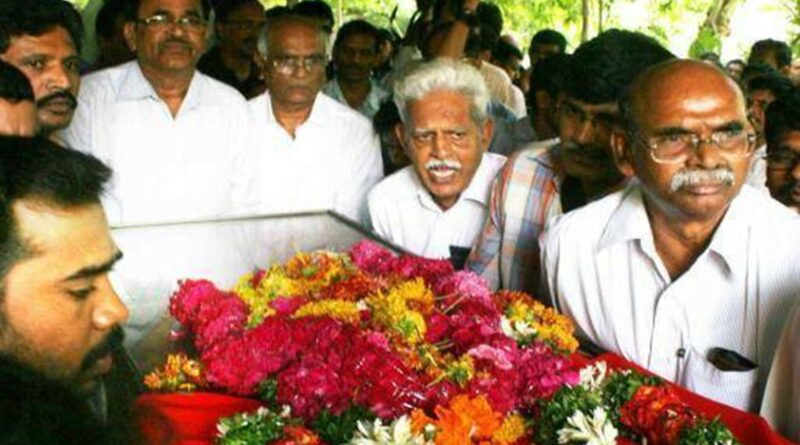 Hyderabad District, July 6, 2022: Justice K. Lakshman of Telangana High Court on Wednesday set aside the Adilabad District Sessions Court order to conduct trial of the 29 police personnel involved in the exchange of fire in 2010 in Adilabad district in which CPI (Maoist) spokesperson and politburo member Cheruku Raj Kumar (Azad) and a journalist Hemachandra Pandey were killed.

Pronouncing verdict in a batch of criminal revision petitions filed by the policemen connected to the exchange of fire challenging the district court order, the judge remanded back the petitions to Adilabad Fourth Additional District and Sessions Judge court. The High Court judge instructed the district judge to adjudicate the petitions within three months in accordance with law.

Raj Kumar alias Azad and Hemachandra Pandey died in an ‘exchange of fire with the police’ on the intervening night of July 1 and 2, 2010, in Sarkepalli forest area under Wankhid police station jurisdiction in Adilabad district. Pandey’s wife Bineetha Pandey and Swami Agnivesh filed petitions in Supreme Court seeking judicial inquiry into the ‘fake encounter’ and criminal prosecution of the policemen and officers involved in it.

The apex court directed the CBI to investigate the encounter. The central agency registered a case under sections 120-B (conspiracy) and 302 (murder) of Indian Penal Code against the 29 police personnel. The CBI filed its final report stating that charge sheet could not be filed in the case as evidence could not be found to substantiate allegations made by the petitioners in the apex court.

As per the Supreme Court direction, the CBI filed the same final report before the Adilabad Judicial Magistrate Court. Wives of the ‘encounter victims’ Azad and Pandey, K. Padma and Bineetha Pandey respectively, filed protest petitions claiming that they had evidence enough to make out a case against the accused policemen.

On hearing their contentions and perusing the CBI report, the magistrate dismissed the case. The two women filed a criminal revision petitions in Adilabad district court which passed an order eventually directing the magistrate court to take cognizance of the case and issue summons to the 29 police personnel facing charges of fake encounter.