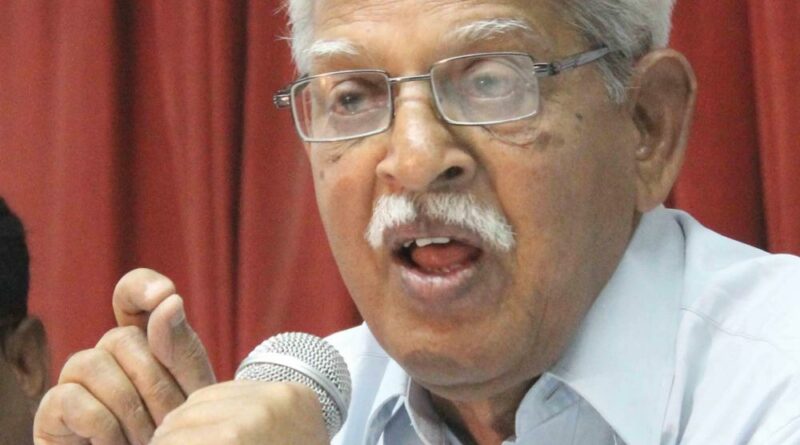 New Delhi, July 10, 2022: The Supreme Court is scheduled to hear on Monday a plea filed by Telugu poet and political prisoner Varavara Rao, an accused in the Bhima Koregaon case, challenging a Bombay High Court order that rejected his petition for permanent medical bail in the matter.

A three-judge bench of justices U U Lalit, S Ravindra Bhat and Sudhanshu Dhulia is likely to take up the matter.

Rao, in his appeal against the April 13 Bombay High Court order filed through advocate Nupur Kumar, said, “The petitioner, an 83-year-old renowned Telugu poet and orator who has undergone over two years of incarceration as an under-trial and is currently enlarged on bail on medical grounds by the Bombay High Court, respectfully submits that any further incarceration would ring the death knell for him as advancing age and deteriorating health are a fatal combination.”

Rao said he has challenged the high court order as he was not granted an extension of bail despite his advanced age and precarious and deteriorating health condition, and his petition to shift his residence to Hyderabad was also denied.

He was arrested on August 28, 2018 from his Hyderabad residence and is an under-trial in the Bhima Koregaon case for which an FIR was lodged by the Pune police at the Vishrambagh police station on January 8, 2018 under various sections of the Indian Penal Code (IPC) and the Unlawful Activities (Prevention) Act (UAPA).

Initially, Rao said he was put under house arrest pursuant to an order of the apex court and ultimately, on November 17, 2018, he was taken into police custody and later, shifted to the Taloja jail.

On February 22, 2021, the Bombay High Court granted him bail on medical grounds and he was released from jail on March 6, 2021.

Giving extensive details of his health conditions, including his sufferings in jail, Rao said the high court order dated February 22, 2021 had contemplated that the petitioner could be on medical bail for an extended period and even permanently on medical grounds, depending on his medical condition supported by medical examination reports.

It added that after the grant of bail, the petitioner’s health deteriorated and he developed an umbilical hernia for which he had to undergo surgery.

He needs to be operated for cataract in both eyes, which he has not undertaken as the cost is prohibitive in Mumbai, the appeal said, adding that the petitioner has also been suffering from increasing neurological symptoms such as slowness of movement, hand tremors and a stooping posture, among other symptoms.

The appeal said it is submitted that in the totality of the circumstances, the trial will take not less than 10 years.

In fact, one of the accused in the case, Father Stan Swamy, who was suffering from similar ailments as the petitioner, died even before the trial could start.

It said the petitioner has a right to health and medical treatment under Article 21 of the Constitution and the same would be violated if he is subjected to incarceration at the Taloja jail.

On April 13, the high court had rejected the plea but extended the time for the 83-year-old activist to surrender before the Taloja prison authorities by three months, to enable him to undergo cataract surgery.

It had also dismissed Rao’s application seeking that he be permitted to stay in Hyderabad instead of Mumbai, while out on bail.

The high court had said it had found substance in several claims made by Rao’s counsel on the lack of medical facilities at the Taloja prison in Navi Mumbai and the poor hygienic conditions there.

The court had, therefore, directed the Maharashtra inspector general of prisons to submit a “candid” report on the state of such facilities, at the “Taloja prison in particular”, and also at all prisons across the state.

The case pertains to alleged inflammatory speeches made at the Elgar Parishad conclave held in Pune on December 31, 2017, which, police claimed, triggered violence the next day near the Koregaon-Bhima war memorial located on the outskirts of the western Maharashtra city.

The Pune police had also claimed that the conclave was organized by people with alleged links to the CPI (Maoist).

Later, the National Investigation Agency (NIA) took over the probe in the matter.