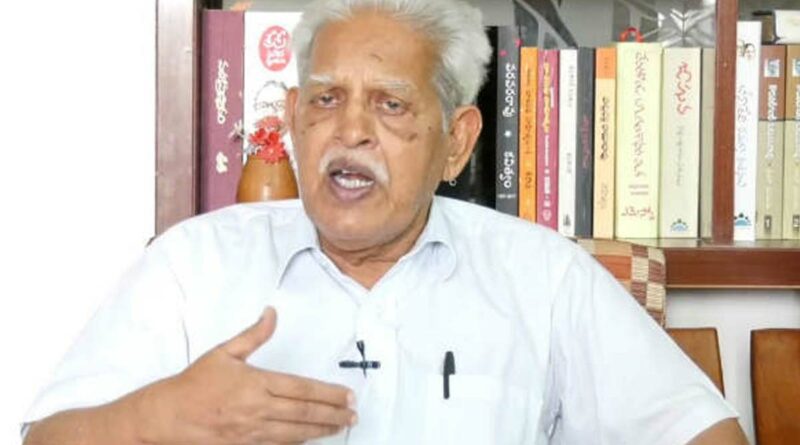 New Delhi, July 12, 2022: The Supreme Court on Tuesday, July 12, 2022, extended the interim protection allowed to Telugu poet and political prisoner Varavara Rao, an accused in the Bhima Koregaon case, and adjourned his plea for permanent bail on medical grounds to July 19.

A three-judge Bench led by Justice U.U. Lalit said Mr. Rao would continue to have the interim protection “till further orders”.

The case was listed for Tuesday next week after Solicitor General Tushar Mehta, appearing for the National Investigating Agency, orally sought a later posting while submitting that the interim protection to Mr. Rao may be allowed to continue. Senior advocate Anand Grover agreed to Mr. Mehta’s request for an adjournment.

“At the joint request of counsels appearing for the parties, list the matter on July 19. The interim protection enjoyed by the petitioner will inure to his benefit till further orders,” the court dictated the order.

The interim protection for Mr. Rao was originally to end on Tuesday.

After the court passed the order, Mr. Mehta however urged the court to extend the interim protection only till July 19, the next day of hearing, and not “till further orders”, as mentioned in the order. But the court did not alter the order, taking into consideration the remote possibility that the case may be adjourned on July 19 too for some reason or the other.

Mr. Rao is currently out on interim medical bail and is residing in Mumbai with his wife.

The poet said in his petition that he had undergone over two years of incarceration as an undertrial prisoner. He had then been enlarged on bail on medical grounds by the Bombay High Court. But it had denied him permanent bail recently. Mr. Rao has appealed to the top court against this order of the High Court.

“Any further incarceration would ring the death knell for him as advancing age and deteriorating health are a fatal combination,” his petition in the Supreme Court said.

Mr. Rao was arrested on August 28, 2018. He was charged under various Sections of the Indian Penal Code and the Unlawful Activities (Prevention) Act.